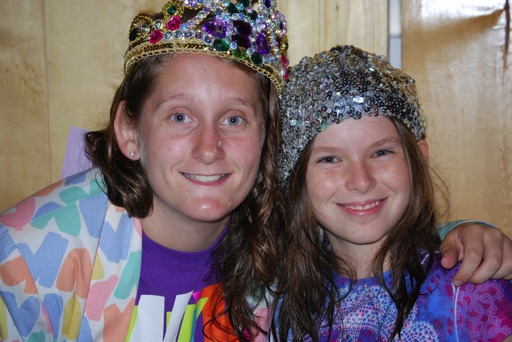 Most Sunday afternoons at camp, we have an all-camp activity, a game or event where all of the age groups get together and play. Here’s an example where we split everyone up into three different teams (pink, blue and green!) and had different relay races… egg and spoon, leap frog, fill the cup, three-legged race, dizzy lizzy, balloon-knees, and so many more.

These are all great games that require some individual skill and a touch of physical coordination, but also plenty of cooperation and shared effort among each team’s members. The best games for girls always require both.

In the end, we might keep score (though that’s often optional) and one team might “win,” but everyone has a fun time playing. 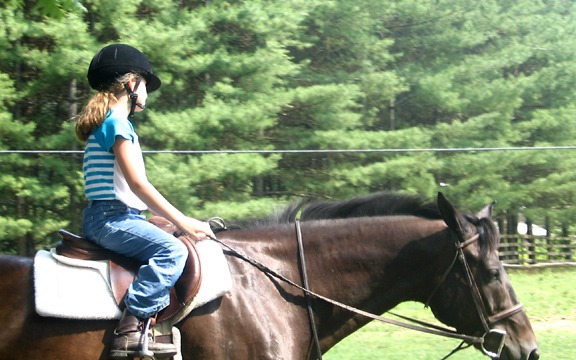 Going to an equestrian camp, a summer camp that offers a quality horseback riding program, is one of the best things you can do to improve your riding skills. It gives you a chance to ride new and different horses, learn from new instructors, to hear about different techniques, and to simply practice everything in a new environment. Along these lines, riding at camp introduces you to new horses and their different personalities. Overall, attending a horse camp program helps diversify your riding skills, experience and horsemanship knowledge. And of course, it’s a lot of fun too! 🙂 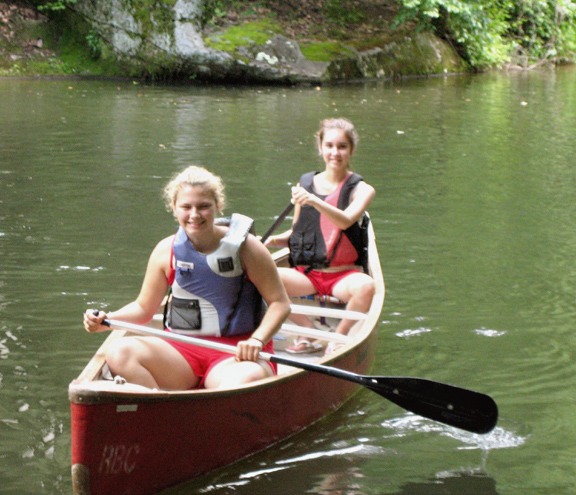 Speaking of canoeing, it’s still a summer camp activity we offer at Rockbrook. Like most of the outdoor adventure activities, we have a progression where kids first learn basic skills and safety procedures, and then move up to more challenging aspects. For canoeing, we learn the names and uses of the equipment (the boats and paddles, for example), then practice different paddling strokes and techniques to steer the canoes in the water. With all of that firmly in place, we’re off to one of the local rivers— the French Broad, the Green, the Tuckaseegee, or the Nantahala. Each offers its own unique challenges and whitewater thrills. 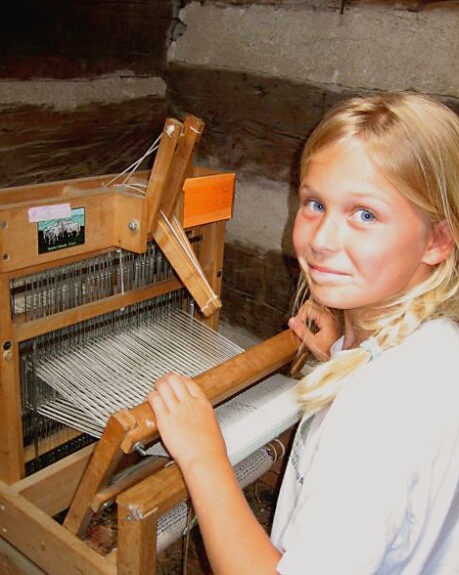 One of the most traditional arts and crafts activities at Rockbrook is weaving. It’s been something girls have done at camp since the very beginning back in 1921. In the craft cabin we call Curosty (which even pre-dates camp!), there are several table-top and floor looms we use to teach basic weaving techniques. It takes some time to set things up and to learn how to operate the looms, but you can make really cool designs. Bits of yarn and string, even natural fibers you gather around camp, all come together to create fabrics, place mats, belts, and other straps. Weaving is a lot of fun, and if you really enjoy it, it’s something you can do at home too.

Another great quote from a Rockbrook alumna:

My favorite thing is returning year after year and spotting a friend from the previous year and knowing that even though you didn’t see each other since last summer… you instantly had a best friend for the next couple of weeks.

Yep, making these kinds of friends is probably the coolest part of coming to camp. 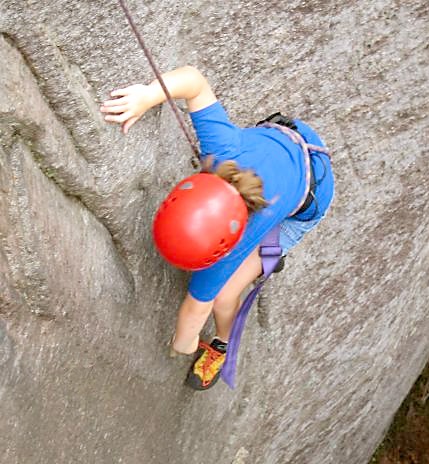 Here’s a middler (who’s finished either the 5th or 6th grade of school) climbing up the route called “Whim” on Castle Rock. It’s just one of the rock climbing routes we have on the camp property. There are definitely some challenging spots, with a cool “foot-switch” move about half way up, so we’ve given it a rating of 5.6. Look at the fancy “mantle” move she is doing by pushing down with her palm. Overall, this climb is about 70 feet high, but it feels much higher because it’s got an amazing view of the French Broad River valley from the top.

Just a glimpse into the great outdoor adventure we have at camp. 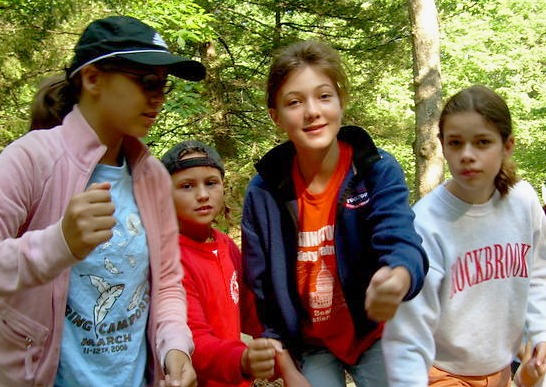 We’ve often said that attending a kids summer camp like Rockbrook helps children become more self-sufficient and independent. But how does it work? What is it about being at camp that makes this kind of growth possible?

One secret is that camp provides a structured environment where we give children the chance to make their own choices and decisions. At Rockbrook, the girls choose their own activity schedule, rotating to new choices twice a week. There are these structured activity times and plenty of open times throughout the day, thus providing both adult supervision and limits within which the girls feel free to decide what to do. Altogether, camp is a place where kids find success (not to mention tons of fun!), through their own efforts, making choices.

It’s no wonder so many people think of their camp experiences as the most important thing they did as a child. 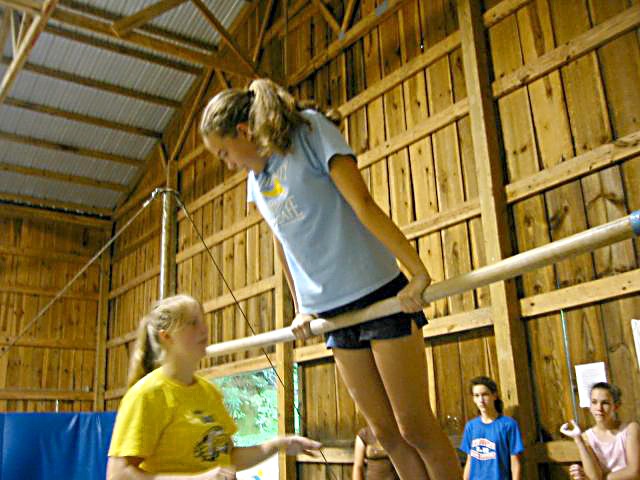 Combine flexibility, poise, balance and some strength, and you’ve got an idea of the gymnastics program at Rockbrook Camp. We teach different classes for girls with different levels of experience so everyone can learn something and improve their skills. We use traditional gymnastics equipment like the beam, bars, and tumbling floor, but also enjoy fun exercises and musical/rhythmic gymnastics. It’s just one of the many skill-based activities available at camp each session. 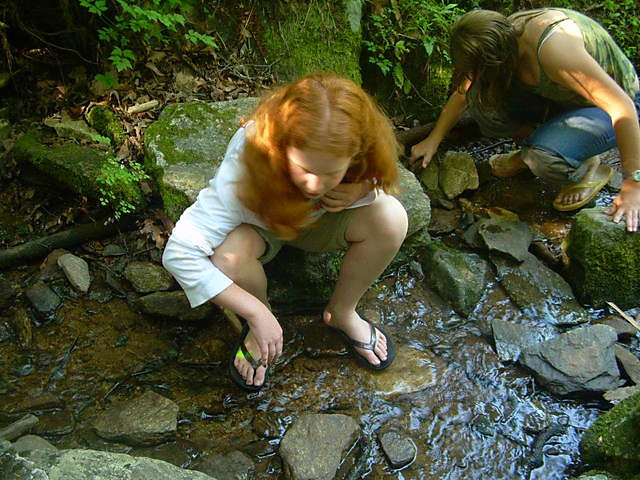 Richard Louv, who we’ve mentioned before, has published a new and interesting article discussing the benefits of outdoor play, the problems caused when it’s neglected, and what we might do to encourage it. The article is in the March-April 2007 issue of Orion magazine, and is entitled “Leave No Child Inside” (link to the full article). Louv has no trouble documenting an overall decline in the amount of time American kids spend outside, and likewise the numerous problems associated with this “virtual house arrest” (“threats to their independent judgment and value of place, to their ability to feel awe and wonder, to their sense of stewardship for the Earth—and, most immediately, threats to their psychological and physical health”).

Despite the forces behind this “nature-deficit disorder” (“disappearing access to natural areas, competition from television, smart phones and computers, dangerous traffic, more homework, and other pressures”), Louv also finds a “growing movement to reconnect children and nature.” What’s crucial here is the positive childhood experience of nature most of us adults share and recall fondly. No matter what our current profession, level of income, or political views, we love those experiences… turning over rocks in the stream, hiking through tall ferns, catching a glimpse of a hawk overhead… and we want our children to have them too.

Louv’s point is that with this kind of broad agreement on an issue, we should be able to do something about it. There’s power to this movement because “no one among us wants to be a member of the last generation to pass on to its children the joy of playing outside in nature.”

Fortunately there is camp. There is a special community designed to help children reconnect with the the natural world, and fortunately, they love it! 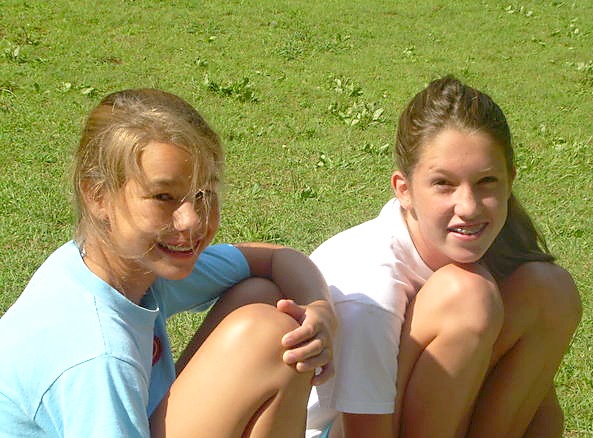 We’re back from the American Camp Association national conference in Austin, Texas where we enjoyed hearing Dr. David Elkind talk about the power of play (free and unstructured play) in children’s social, emotional, physical and cognitive development. He was invited to address the conference of sleep away camps because he understands traditional summer camps as excellent contexts where this kind of play is encouraged. Dr. Elkind explains in his new book entitled, The Power of Play: How Spontaneous, Imaginative Activities Lead to Happier and Healthier Children.

Here’s a quote that jumped out at me. He writes,

Not only does summer camp provide children relief from the pressures to achieve, it reacquaints children with the natural world, with the importance of friendship, cooperation, and the fragility of the environment in which we live.

The book, of course, goes into lots more detail and provides specific advice about how to encourage this kind of beneficial play, but here are a couple of the main points.

There is much to say about each of these, but it’s neat to see how summer camp, and particularly a sleep away camp like Rockbrook, can really encourage them.  Camp is just one of those places where kids can be kids.