A girl who attended Rockbrook in the 1920s recalls the multi-day canoeing adventure on the French Broad River.

“When I had done nothing less than run up the hill twice and play off a tennis match, I suddenly remembered I was going on an all-day canoe trip. I dashed madly down the hill again to the landing and found I had not been left, after all. Mrs. Carrier was to go with us, which made the trip simply grand. Only three canoes went, and the trip was a roar of laughter from beginning to end. Mrs. Barron and Miss Neely had never been down, so there were many new things for them to see. 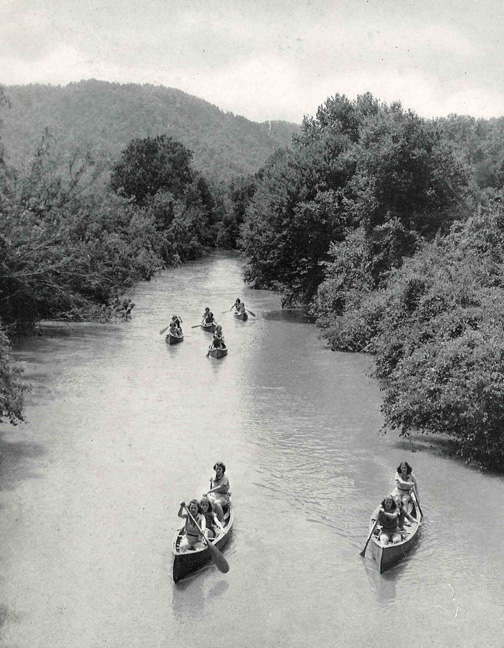 We amused ourselves childishly all morning by jumping up and down in the bow and making waves. We had lunch at French Broad Landing, and my! how good everything was, from steak to caramel cake. That’s what comes of having Miss Neely along. Much to our sorrow, Mrs. Carrier had to leave us, but Doe came. We changed canoes after lunch, and Miss Neely was with Jane and me. We started the afternoon pleasantly by accidentally splashing some water on the next canoe, and then the fun began. Miss Neely tried vainly to shelter herself under a raincoat, but finally had to succumb to Jerky’s pleas to get in her canoe. Jo came in ours, and poor Doe had no-where to go. Jerky’s canoe, seeing themselves in danger, paddled ahead, and Miss Neely paddled for the first time in her life. A series of water fights ensued, and Jerky called back to us not to swallow any water, but I was beyond that stage. I talk so much that my mouth stayed open, and as I could not habitually think and splash at the same time, I consequently nearly choked.

We were paddling along with ease and agility, when we came together and turned each other over. Seeing our paddles floating away, Jane and I abandoned our canoe and went after them. From then on we stayed mostly in the river. We would hardly get settled when we would laugh so hard that we’d go in again. We were supposed to be at Penrose at four o’clock, and Late was there to meet us. Poor man, I know he wished he had lived up to his name, for we were an hour and a half late. Did we have a good time! Well, I should say! To say nothing of a hot late supper.”