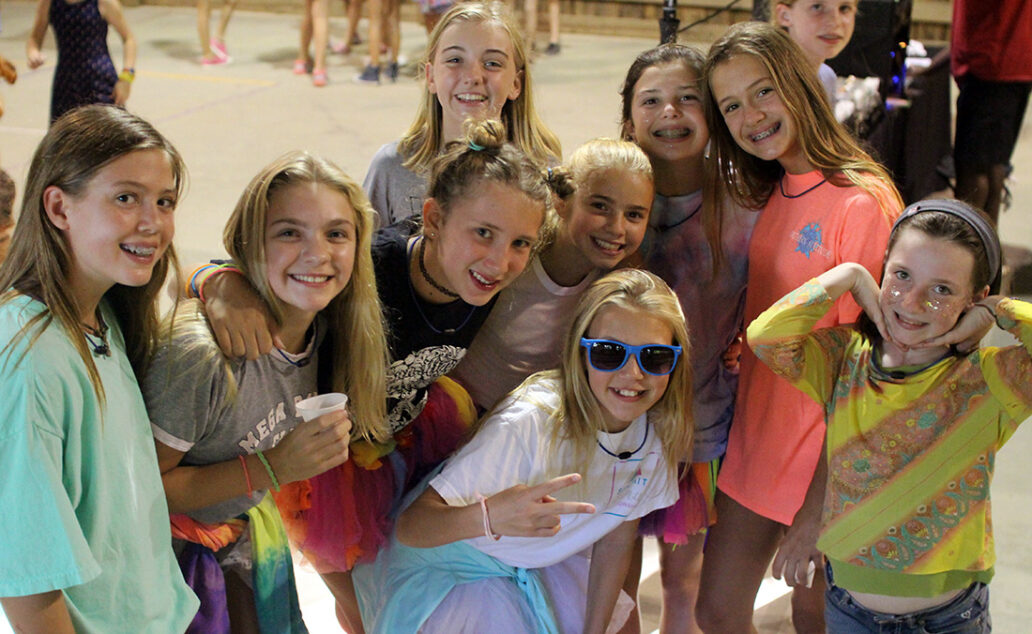 There’s probably one special all-camp event that gets campers more excited than any other, and that’s a dance party with one of the neighboring boys camps. It’s an event campers plan for, in some cases anticipate anxiously, but definitely think of as a BIG deal. Like most of our special events at camp, it involves dressing up, music, dancing and food— aren’t those the essential ingredients for a fun party after all? —but a camp dance is somehow even better. Tonight Camp Carolina and Rockbrook took to dancing!

For years now we’ve held two dances simultaneously, dividing the children into older and younger groups, allowing the girls to feel more comfortable around boys their own age. Tonight the Senior girls and Hi-Ups loaded up our buses and vans to travel to Camp Carolina for their dance, and the youngest boys came to Rockbrook for a dance with our Middlers and Juniors.

I knew to cover my ears when Chase announced the dance during lunch today, because the girls’ roaring reaction was truly deafening. The rest of the afternoon, conversations were about what to wear and when every girl (well, maybe not all of the Juniors!) would be able to take a shower to get ready. During dinner it was fun to see how the girls chose to get “dressed up.” In addition to special “nice outfits” packed especially for the dance, the older girls in particular were more inclined to wear flamboyant and silly costumes: Hawaiian shirts, traffic vests, cat t-shirts, plenty of tie dyes, and a couple of dinosaur costumes. Even this session’s camp moms Janet and Bentley dressed as old ladies! It’s almost expected; whatever you wear to a camp dance, it shouldn’t be too serious.

And that’s because the mood of the dances is high spirited and jubilant. For both the younger and the older girls, the dance means grabbing a friend, or a group of friends, and sticking together. No matter what the music, some familiar pop song from Bruno Mars for example, or some other Techno track (which for some reason is a popular genre at Camp Carolina), the dancing involves mostly jumping up and down to the beat, with only the occasional other “moves.” The exception to that are the recognized group dance songs with set choreographed dances like “The Wobble,” “The Cha Cha Slide,” and “Cotton Eyed Joe,” for example.

When the dance at Camp Carolina for the older girls and boys switched occasionally to a slow song, you could feel a little tension in the room rising. Some girls were clearly not interested in a slow dance and quickly left the dance floor or grabbed a friend, indicating they were already “out.”  A handful of brave boys and girls, though, paired up for an awkward, arms-outstretched, shuffle from side to side. It was hard to ignore this awkwardness, particularly when everyone looked so relieved when a fast song came back on.

We wrapped up the dances around 9pm, and after almost 2 hours of jumping around, the girls were sweaty, a little tired, and probably dehydrated. But they were also about as excited as you’ll ever see them. It was non-stop chatter on the bus ride home— comments about who was dancing with whom, that “boy with the weird hat,” the music selection played, how “I danced with a boy 2 years younger than me!”, and how the “whole place smelled like B.O.”  With all good things, it was another fun camp night of dancing. 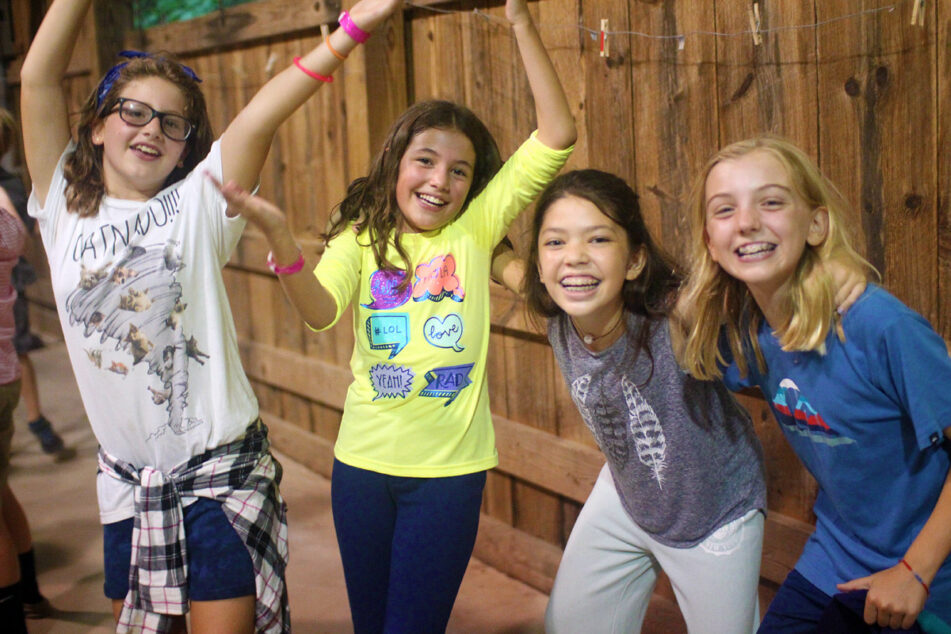 An evening dance party with a neighboring boys’ camp is one of the most exciting events we hold every session. Just like in the movie(s) The Parent Trap, it’s an all-camp event anxiously anticipated and always a BIG deal in the girls’ minds. We have three different camps for boys we dance with: Camp Carolina, High Rocks, and Rockmont, and tonight it was Carolina’s turn to mix with Rockbrook.

Since we’d have too many children to combine both camps in one location, we have the habit of holding two dances simultaneously, dividing the boys and girls into an older group and a younger group. Tonight the Senior and Middler girls loaded our buses and vans for the trip over to Camp Carolina and the Juniors stayed here at Rockbrook to welcome the youngest boys.

Before that, when the dance was announced (Like all special events, we kept it a surprise.), it was an afternoon of grooming around here. Every shower ran non-stop for two hours, fully testing our tankless hot water heaters. It’s nice to never run out of hot water on a day like this. Special shoes appeared, and miles of long hair found a hairbrush… for the first time at camp in some cases, I’d guess. But don’t think everyone’s goal was to get “dressed up” for the dance. Cleaned up yes, but there were also plenty of silly costumes on display. I saw a “catnado” and a unicorn t-shirt, traffic vest, a supergirl and a bear costume. Many of the 9th graders used facepaint to draw a “third eye” on the their foreheads as well as the letters “CA.” Sports jerseys, bandanas, overalls, and tiedyes almost outnumbered “nice” shirts and shorts. Quite insightfully and in true Rockbrook form, these girls have allowed their playful spirit to outdo any expectation to be “attractive.” They know from experience that trusting that spirit makes things more fun.

The two dances themselves have a different feel. The younger kids dancing here in our gym were led by our friend and professional DJ Marcus. He’s an expert at playing music that is fun and familiar to the girls, with an emphasis on group dance songs like “Y.M.C.A,” “The Cha Cha Slide,” and “Cotton Eyed Joe,” for example. With the counselors dancing right along, the girls had a great time making conga lines, posing for photos, and trying new dance steps with their friends.

The dance at Camp Carolina for the older girls and boys was held in their dining hall. They set the mood by turning the lights down so a large illuminated disco ball hung in the rafters became the main light. The music selections focused on more current pop songs, with some Hip-Hop, Dubstep and Techno tracks mixed in. There was also an occasional slow song that signaled a few brave boys and girls to pair up for slightly awkward, arms-stretched, side to side shuffle. These slow songs equally inspired some girls to pair up and mimic that same slow-dance style with each other. It seemed to me that most everyone was happy when a fast song returned, replacing the finishing slow song. Group jumping instead of individual shuffling— it’s just better.

The bus ride back to Rockbrook was a chance to talk about the dance, to process what happened paying particular attention to who danced with whom, who said what to whom, and how they enjoyed the dance overall.  One senior girl said she had “a great time,” and another told me she “loves the Camp Carolina dances.” So the reviews for the girls are positive! It was another great night out dancing. 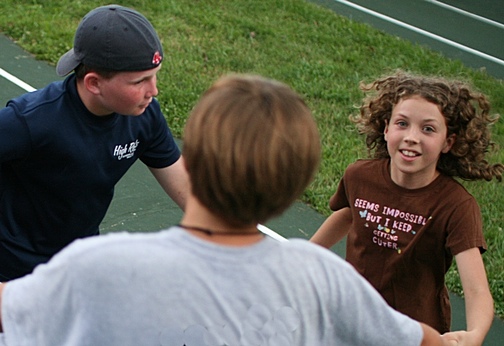 It’s been a long tradition at Rockbrook to spend an evening or two each session having a camp dance with a local boys camp. Just like in the movies, our girls will travel over to the boys camp, or the boys will come over to Rockbrook. We’ll set up a sound system in the gym, get dressed up and dance around to music selected by the CITs. Over at High Rocks, the boys camp over the mountain from us, we held the dance last summer, which was a square dance, outside on their tennis courts. When we go to Camp Carolina, the other boys camp in town, they clear out their dining hall for the dancing.

These dances are always very exciting for the girls, partly because they are so infrequent, but also because they involve boys. Since Rockbrook is an all girls camp, having boys around is infrequent too! Of course this can make things a little nervous and awkward at first, but once everyone gets moving, both the girls and the boys relax and have fun. 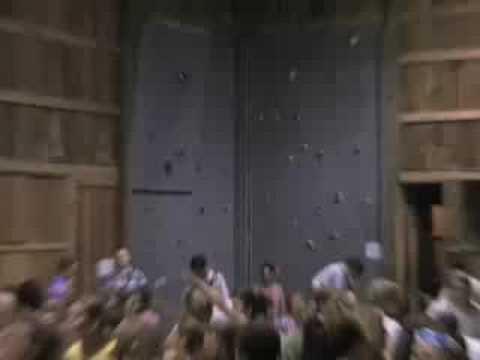 We’ve been meaning to post something about this all summer, but only just now sat down to do it.  Back in June we had the awesome instrumental rock band The Weisstronauts play a show at camp.  Pete Weiss, who fronts the band, and who knew Jeff from his Chicago days (the early 1990s!), had an open tour date, and everything worked out for the Rockbrook girls to have a rockin’ dance party.  Dance contests, limbo competitions, conga lines — it was non-stop action!

The band’s music is a little hard to describe, but you take 3 electric guitars, bass, drums and the occasional “accent” instrument and roll out surf, country, spy, psychedelia and rock styles.  Very danceable, very up-tempo, tight playing, and fun through and through.

Head on over to the Weisstronauts’ Site and you can hear the leading track, “Fisticuffs,” from their new CD Instro-tainment.  You’ll enjoy it.  Promise.

And here’s one more treat.  During the show at Rockbrook, the band recorded some video, and now Pete has put together a music video that uses some of that footage.  Take a look and you’ll see RBC!  The song is “Seven-X’s,” also from the new CD, and the old-looking footage in the video is from the 1939 World’s Fair in New York.  Very Cool.