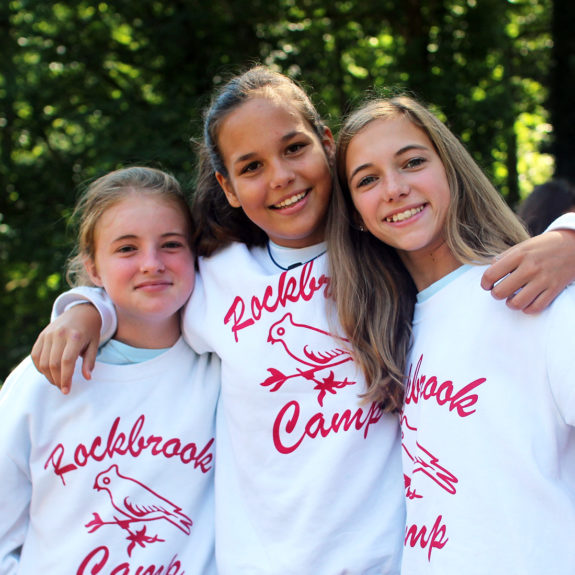 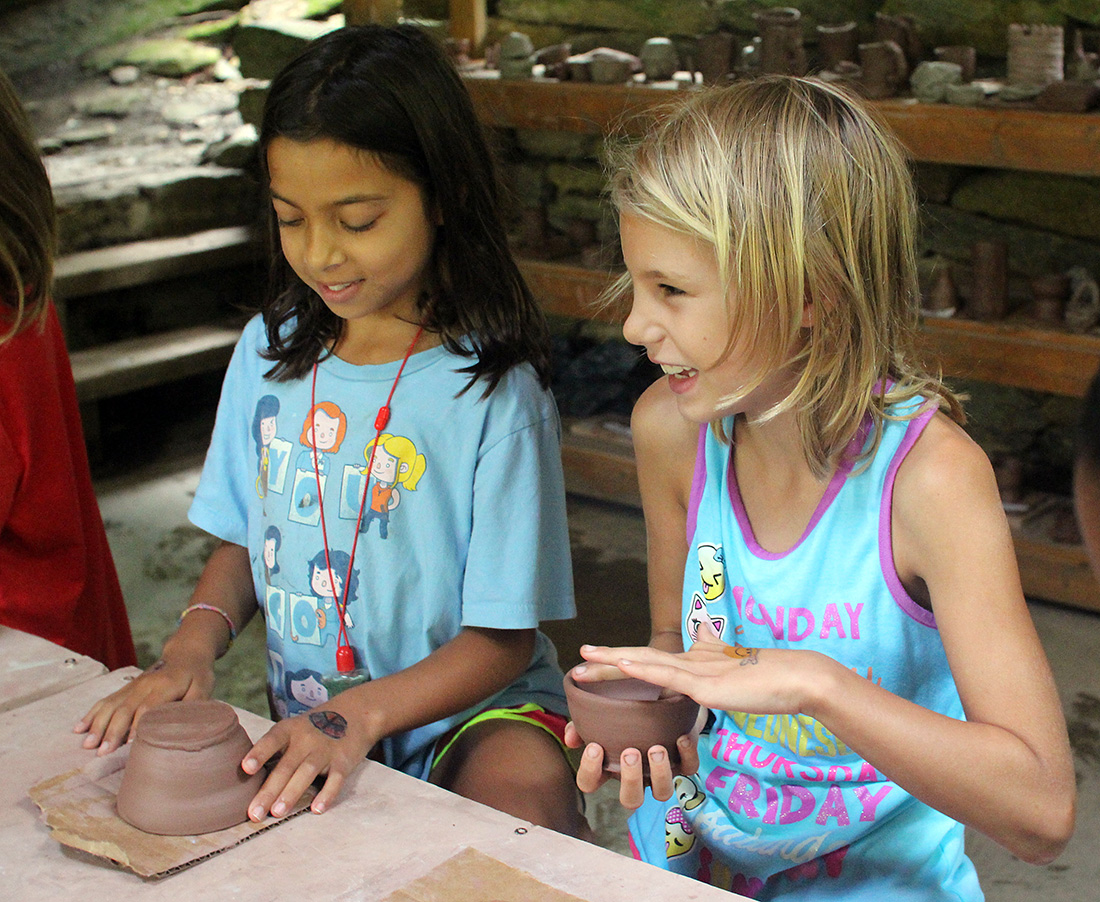 This is the time during a camp session when girls can be seen spending some of their free time doing crafts. You see, some of the craft projects can take quite a bit of time to complete. Take weaving, knitting or friendship bracelet making for example where a basic unit— passing the weft, knitting stitches, tying overhand knots —is repeated over and over again. Depending on the size of the project, this can require extra effort to complete. Likewise, other crafts have multiple steps involved. A painting may require a simple pencil sketch before layering on paint, for example. In pottery, there’s shaping the clay (on the wheel, using coils or slabs, etc.), letting it dry, applying different colored glazes, and then firing the pieces in a kiln. The pottery instructors want to fire the kilns on Monday, in time for the girls to pick up their finished work before going home, so there seemed to be a non-stop glazing party in the upper pottery studio today. Both kilns will fire two times over the next few days producing several hundred pieces of colorful ceramic works of art. At least one of them is bound to be yours! 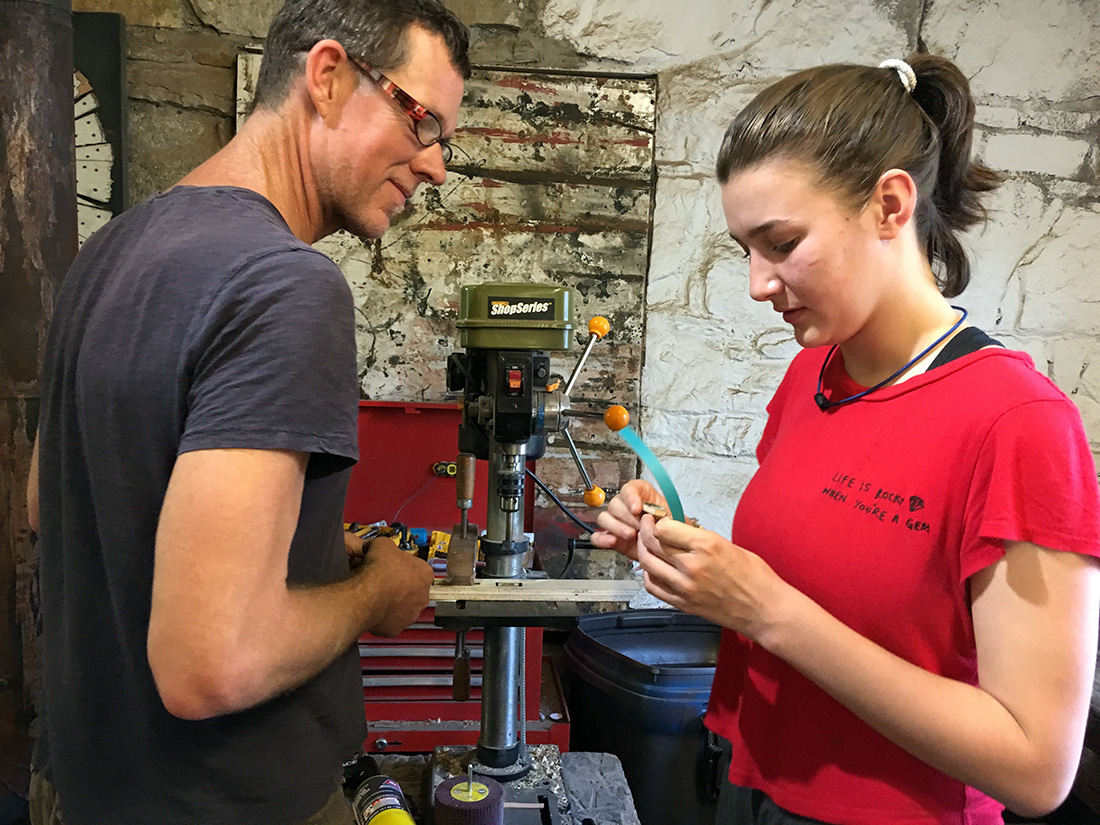 There’s always something special, out of the ordinary, being offered at Rockbrook, and today it was a visit to George Peterson’s woodworking studio for a tour and project workshop. Two groups would spend either the morning or the afternoon learning from George and his wife Margaret who is an Alumna of Rockbrook. George is a successful working artist here in Brevard who creates sculpture and functional pieces from different species of wood, old wooden skateboards and skis. He’s displayed his work in galleries across the United States and abroad. It’s no surprise when you see his work. Take a look at his portfolio: The Circle Factory.

Visiting George’s studio is fascinating. He has stacks of raw materials, powerful cutting tools, drills, torches and other scraps of metal he uses to shape and scar wood. There are piles of saw dust, paints and ink, straps of leather, completed projects displayed and works in progress.  Today’s project had the girls making a leather and wood bracelet from a chip of a multilayered skateboard. George and Margaret helped the girls use a drill press, a vibrating carving tool, sandpaper and a metal “RBC” brand to shape a colorful chip that they then sewed to a leather strap. As they completed each step, the girls soon had very cool “wrap around” bracelets to wear, and an exciting story to tell when they arrived back at camp.

There’s a rumor circulating among the campers that there was a midnight party last night. Some of the campers remember being woken long after they went to bed and being coaxed out to the hill where they found glittering fairies dancing, food and drink, and loud Beyonce music. Still half asleep, disoriented by glowing balloons, multicolored glow sticks, and the antics of the fairies, the campers soon found themselves having a fun, outdoor, nighttime dance party! Then as suddenly as it began, the fairies disappeared and the girls were back in bed. It’s just a rumor whether this fairy party happened or not, but I think I spotted some glitter on the hill the next morning. That makes sense, since at Rockbrook, we all know fairies are real. 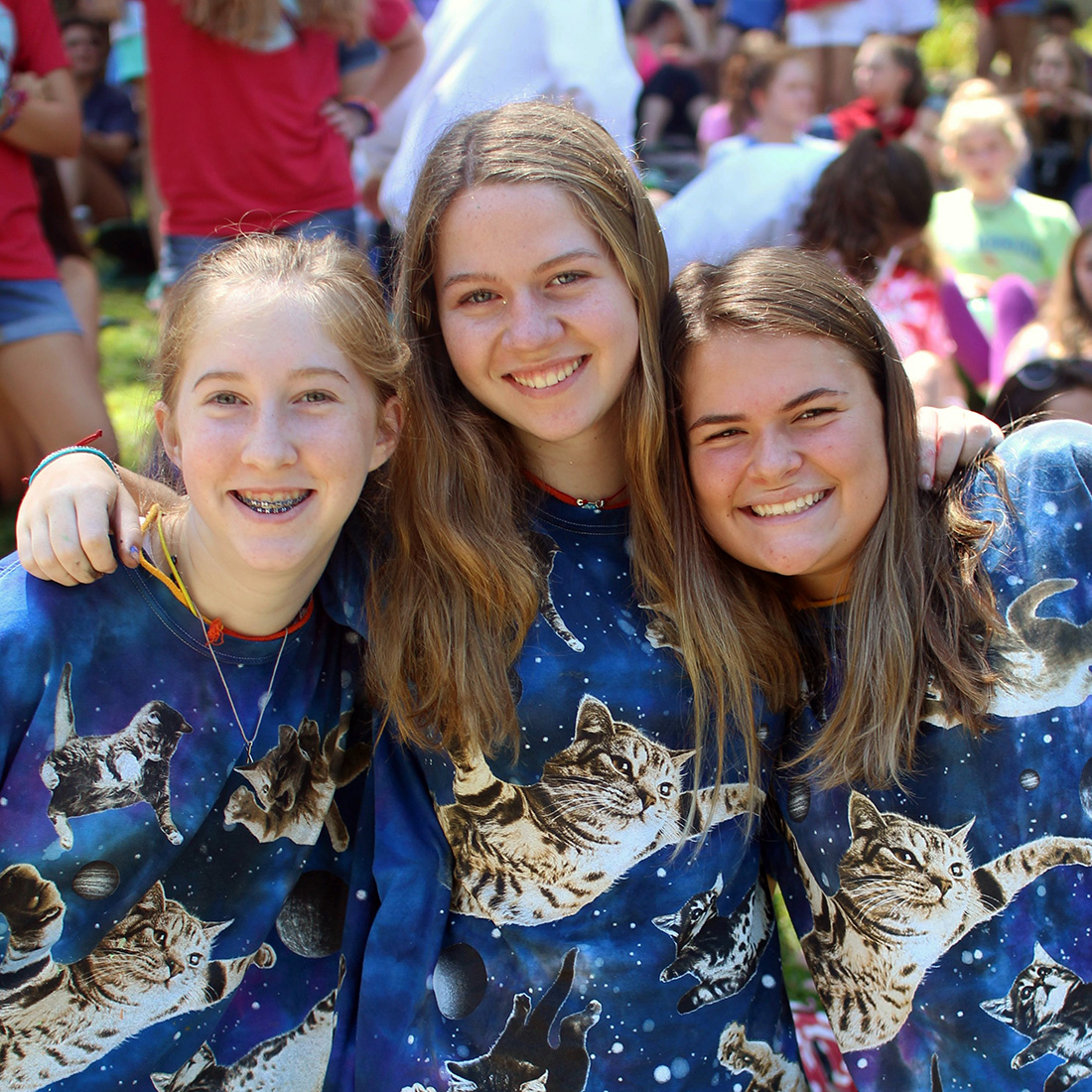 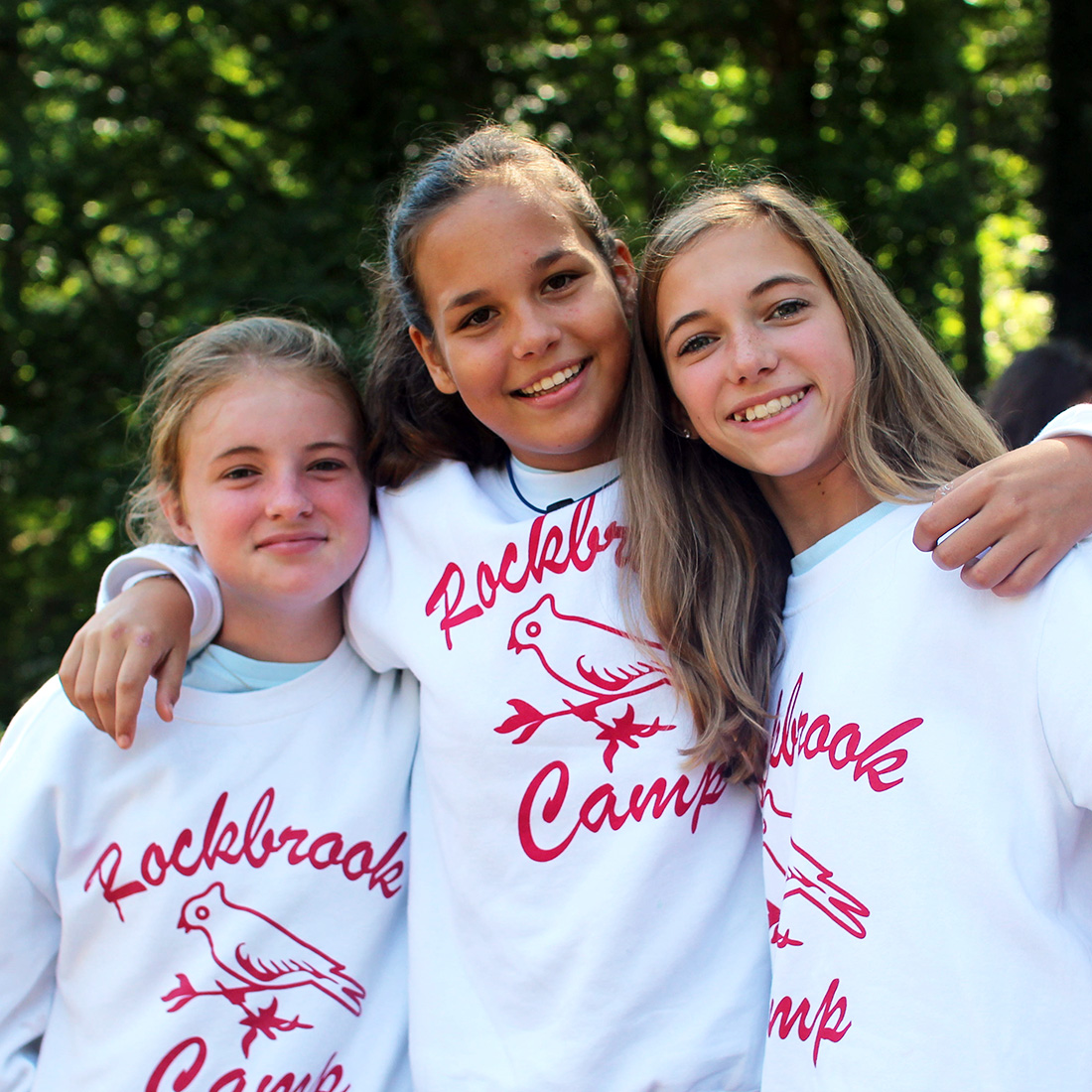 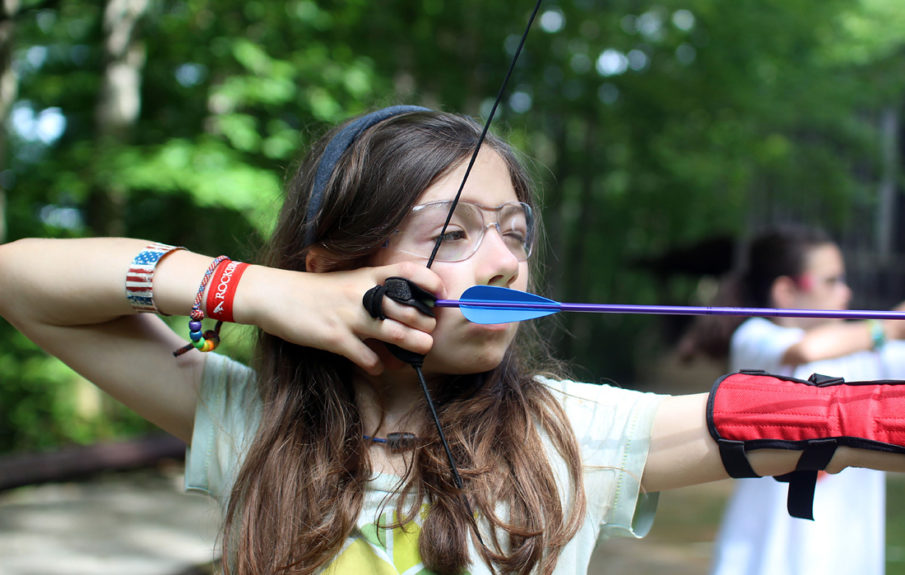 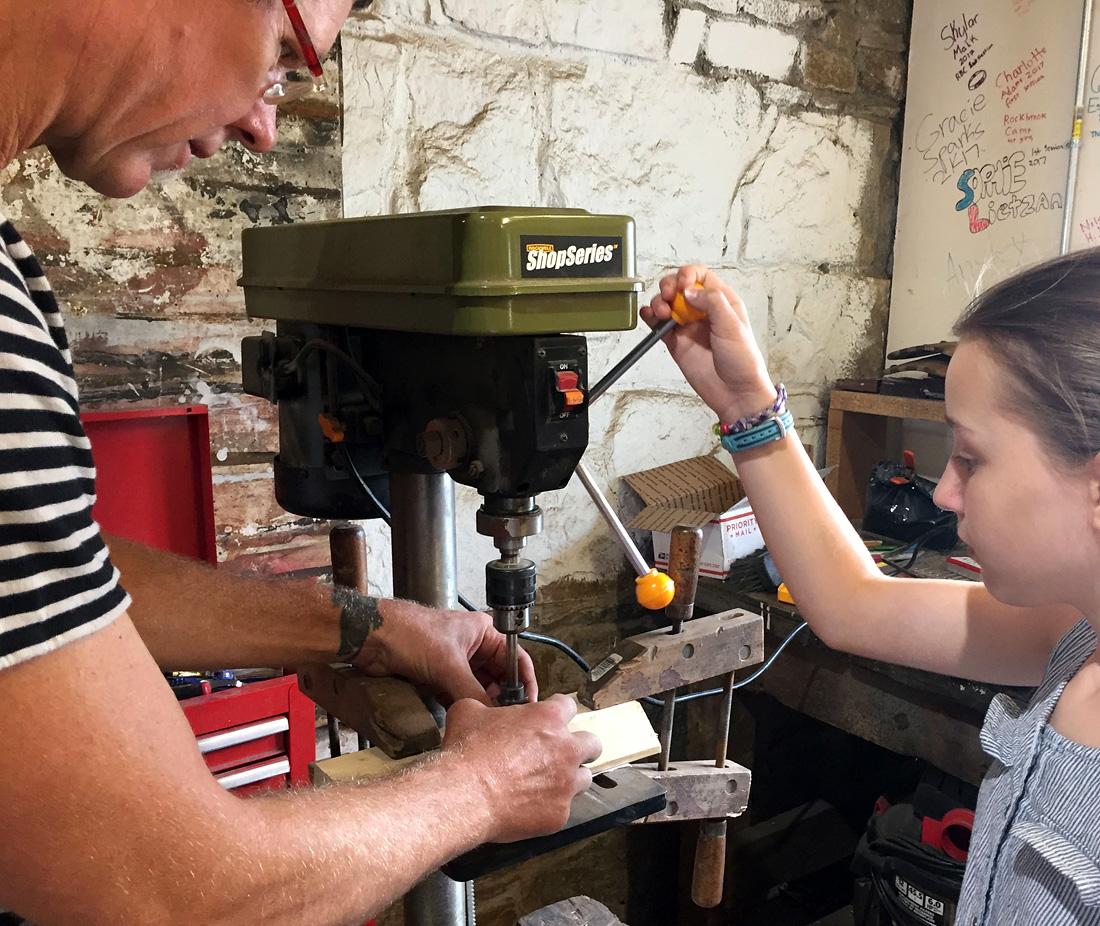 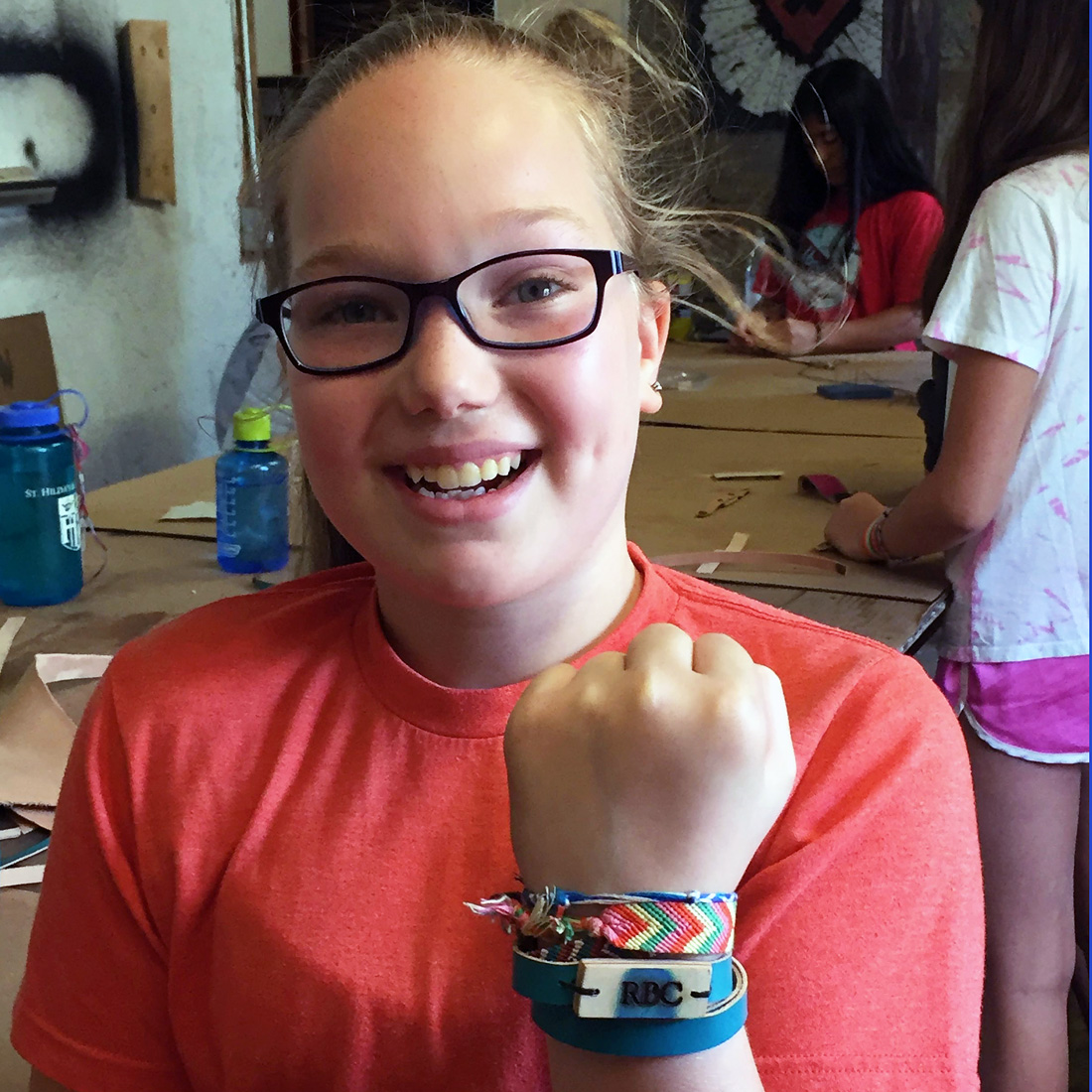 During breakfast we announced another special activity for the girls today: a visit to George Peterson’s woodworking studio for a tour and project workshop. George has offered different workshops like this to our Rockbrook girls for three years now. His wife Margaret is an Alumna, and his two daughters attend camp every summer. George is widely known for his art, his creative carving, etching, burning and painting of different species of wood, old wooden skateboards, and skis. He’s displayed his work in galleries in New York, Tokyo, San Francisco, and Atlanta, and continues to work as a professional artist out of his studio, The Circle Factory.

When the girls arrived, George first toured them around the studio pointing out several of his specialty tools, like drills, saws, torches, and the giant lathe he uses to turn logs into huge bowls. The girls were fascinated by the stacks of raw materials they saw too: slabs of wood, old skateboards, leather cords, paints and inks. There were finished pieces and works in progress displayed almost everywhere. Each girl was then able to make their own project, a leather and wood bracelet. With help from George and Margaret, the girls used a drill press, a carving tool, sandpaper and a metal “RBC” brand to shape a small chip of multicolored skateboard that they then sewed to a leather strap. There were multiple steps to the project, but the girls each had a cool, one-of-a-kind bracelet to wear proudly when they were done. 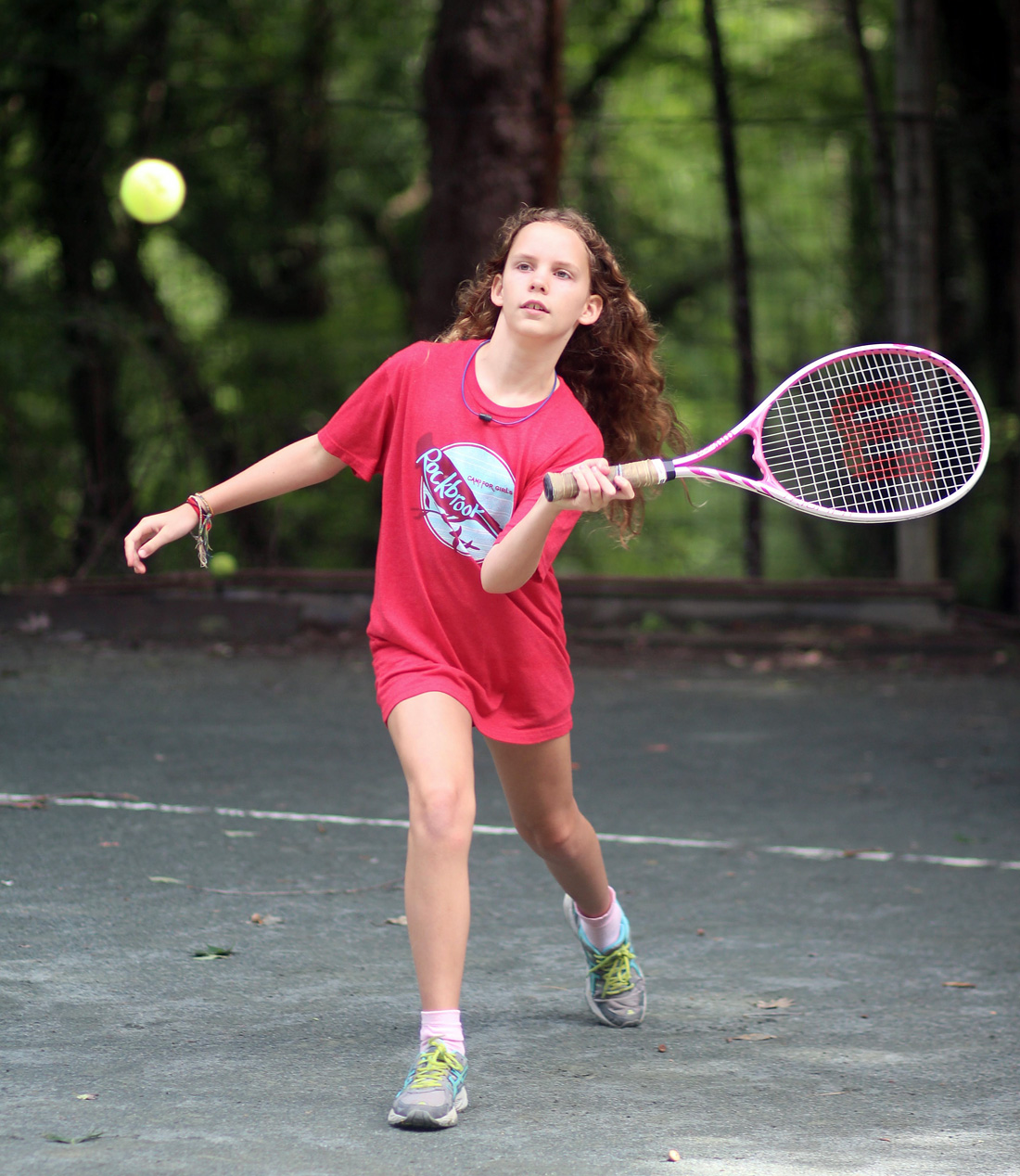 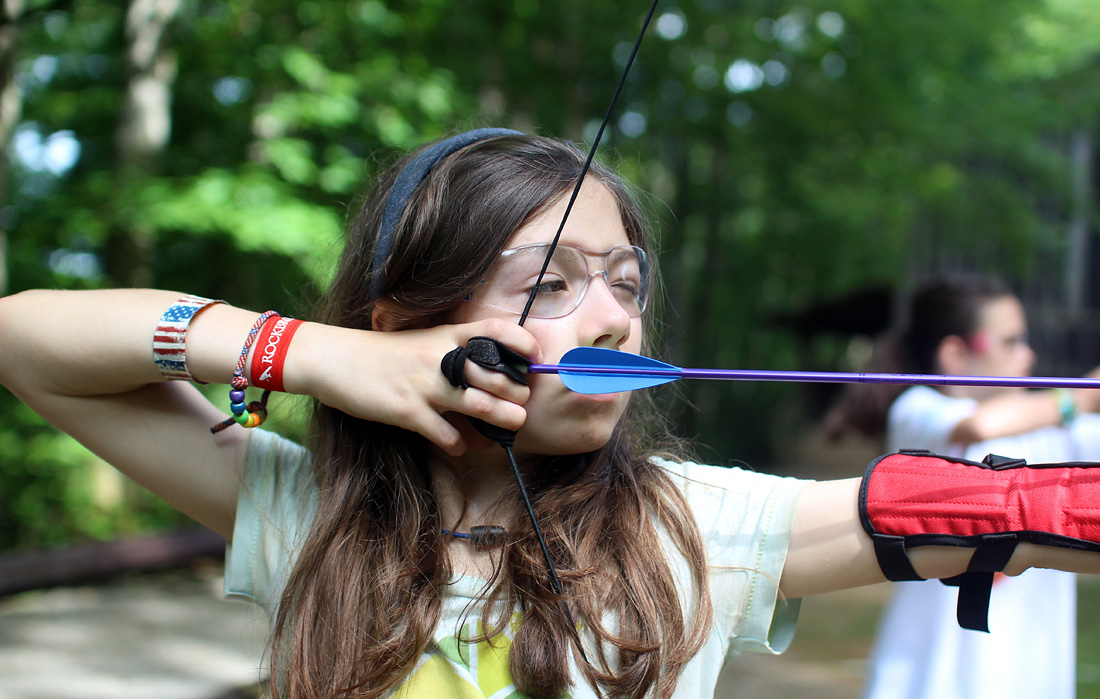 For all of us who stayed in camp, our morning was filled with a whole range of activities. Girls were climbing high above camp on Castle Rock, trying to “slay the dragon” (which is lingo for climbing to the top of our route called “Dragon Tail”). Others were whooping as they flew through the trees on our zip line course. A few Senior girls took on the challenge of climbing the Alpine tower blindfolded, while at the lake, Sarah and Stephanie, our kayaking instructors, were teaching a roll clinic. Archers and riflemen (girls actually!) were gleefully shooting holes in their targets. Equestriennes were gliding their horses around the arena, outdoor ring, and jump course. Girls played tennis; they shot basketball, and swam laps in the lake. Of course, there was non-stop arts and crafts too, from weaving on the loom to stringing beads and glazing pottery, making candles and blended dot painting. It’s difficult for our photographers to capture all this activity— though they do pretty well! — but you can tell, this place is bustling!

Just as lunch ended today and the girls were heading back to their cabins for rest hour, the sky began to darken and suddenly our lightning warning system sounded its alarm. A few stragglers took off running, and about 3 minutes later we all jumped when a loud crack of a lightning struck nearby, not so close that we could tell where it hit exactly, but close enough to be frightening. Fortunately, everyone was safely inside, but then as the storm built overhead, the wind picked up, the temperature dropped 15 degrees, and a hard rain began to fall. A moment later, it was hailing pea-sized hail! For about 5 minutes, that storm passed by and put on quite a show. Several girls told me later that this was the first time they had ever seen hail.

The main event of the evening was something many of the girls, particularly the Senior campers, anticipate and look forward to every summer: a dance with Camp Carolina. This was a chance to get cleaned up a bit (find that hairbrush), pull out a special outfit, costume, or glittery makeup, but mostly to enjoy jumping around with friends to favorite pop songs.

With both camps involved, there are too many children to hold a single dance for everyone, so we held two again: one dance at Rockbrook for the younger boys and girls, and another at Camp Carolina for the older ones. For about and hour and a half, both dances kept everyone moving, pausing now and then for a photo or a water break. Everyone was hot and sweaty by the end of it all, but the girls had a great time dancing together and singing along to the songs. Oh, and there were boys there too, though that didn’t seem to matter much. It was a fun, classic way to spend an evening at camp. 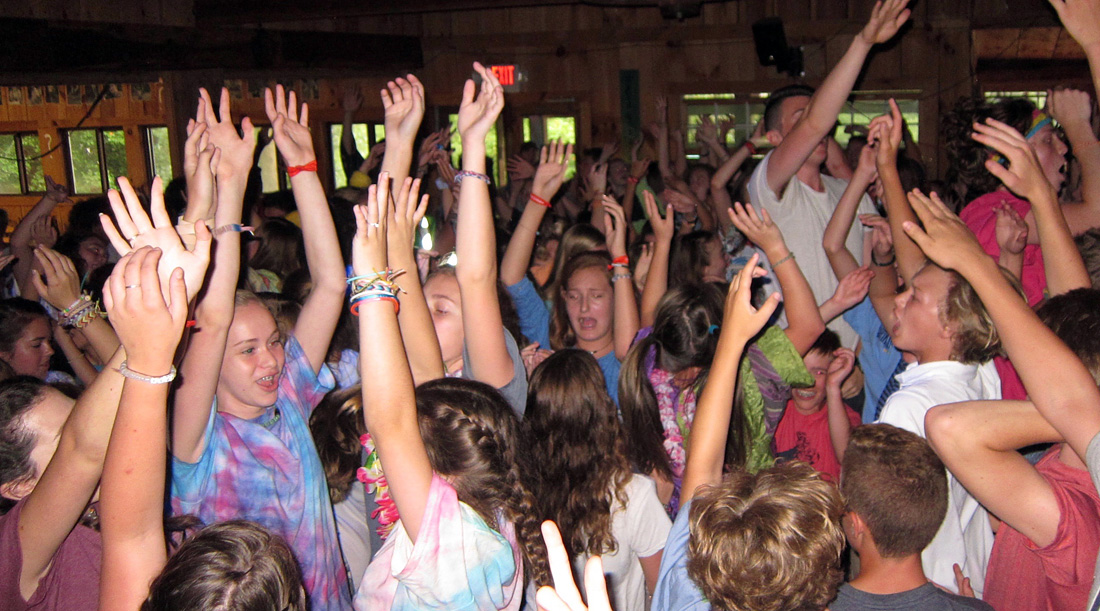 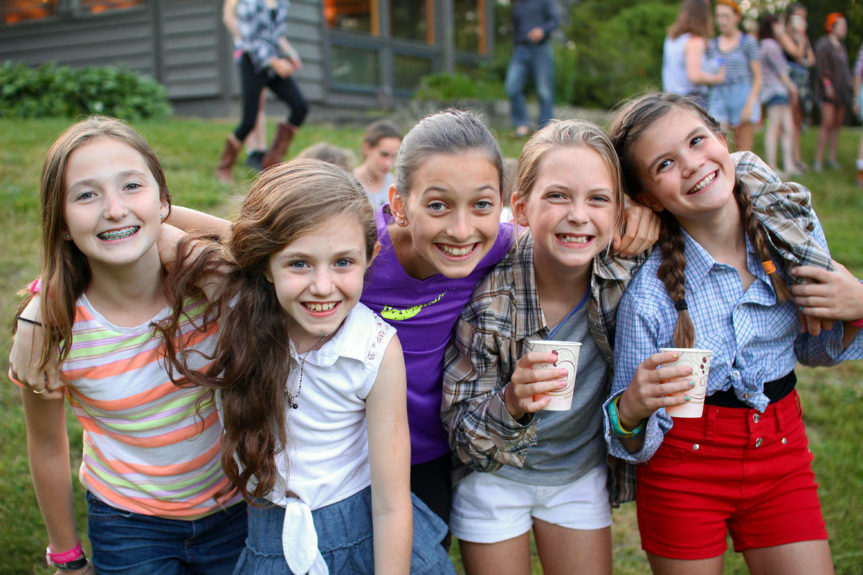 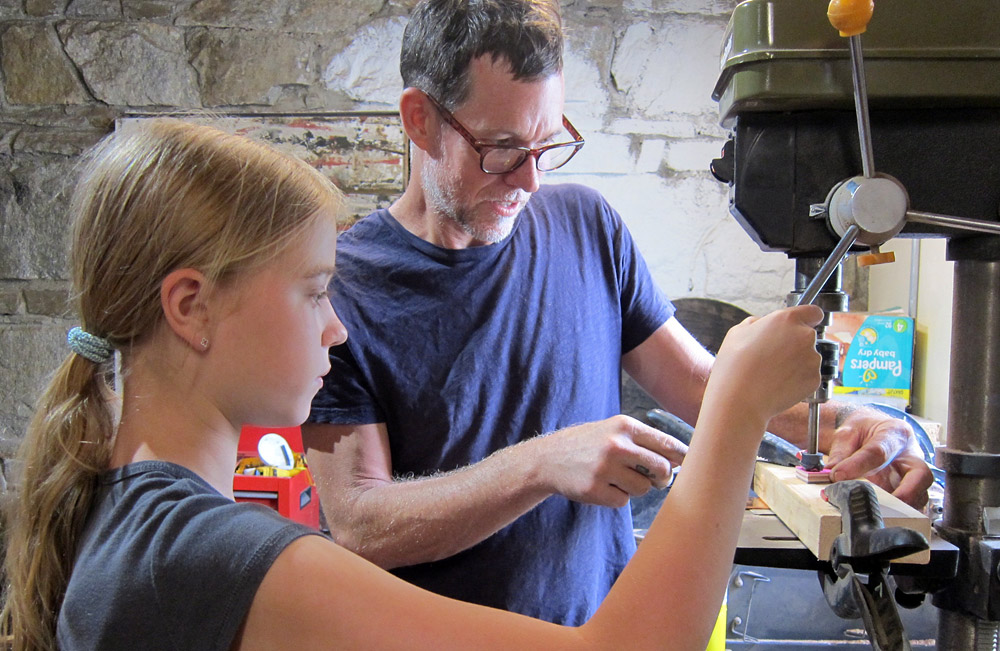 Today we were lucky to have George Peterson present a woodworking workshop to our campers. George is a professional artist who lives here in Brevard with his two daughters (who come to Rockbrook) and his wife Margaret (who also attended Rockbrook as a girl). He is a woodworker, carving, etching and painting both sculptural and functional pieces of wood. He’s been producing art for more that 25 years and has shown his work in galleries around the world (in Japan recently, for example) and across the US. Take a look at his Website and you can see the bowl he turned for the White House, plus several other photos of his amazing work. He makes gorgeous stuff. 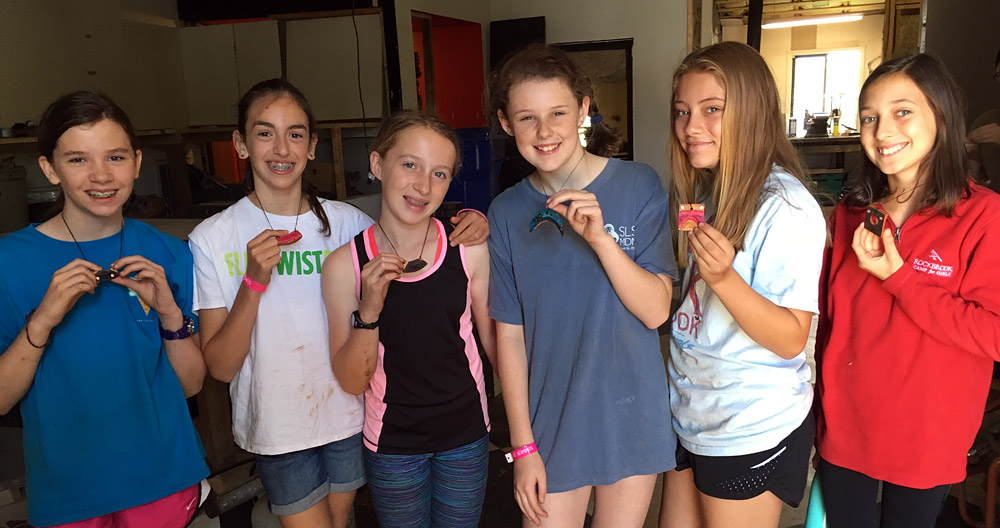 George and Margaret have held wood turning workshops for us in previous summers. This year, to try something new, he invited our groups to his studio and demonstrated how to take chips from old skateboards and make cool pendant jewelry. The skateboards are made from layers of different colored wood, so when cut at an angle, the chips become multicolored. Then, using a vibrating carving tool, the girls cut patterns and groves giving their pieces even more texture and interest. George helped them use a drill press to drill a couple of holes and a metal brand to burn the letters “RBC” into one side of each piece. Another option was to hammer in a couple of steel or copper tacks, adding some shine to the jewelry. A little sanding polishing and buffing, plus a dip into clear mineral oil shined everything up and really accented the different colors and textures of the carvings and metal. The girls learned about using the different tools, and ended up with a really nice handmade piece of art they can wear proudly.

Time enjoying all the regular activities filled the day, with girls chatting on the back porch of Curosty doing needle point, while others flew by on the zipline course. A leisurely hike to Rockbrook Falls (one of the big waterfalls on the RBC property) and another more difficult hike to the top of Castle Rock, the massive rock cliff high above the dining hall, were also options this morning. Rehearsals for this session’s camp musical, which the girls will present next week on Wednesday, are happening during both Free Swim periods (before lunch and dinner). And, of course we’ve been loving the fresh baked muffins every morning between activity periods. The “Confetti” flavor today was a huge hit. 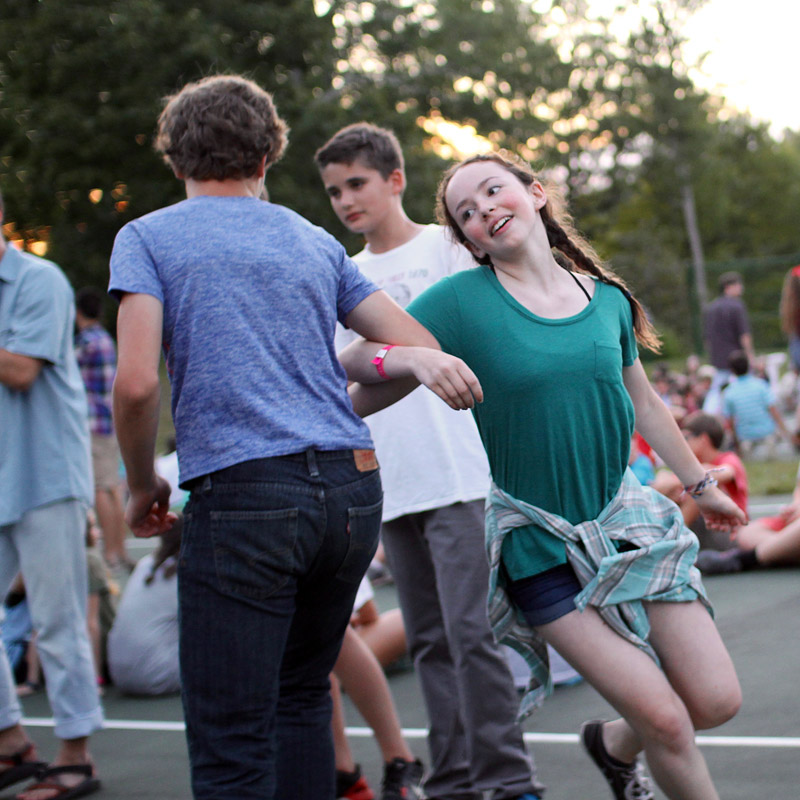 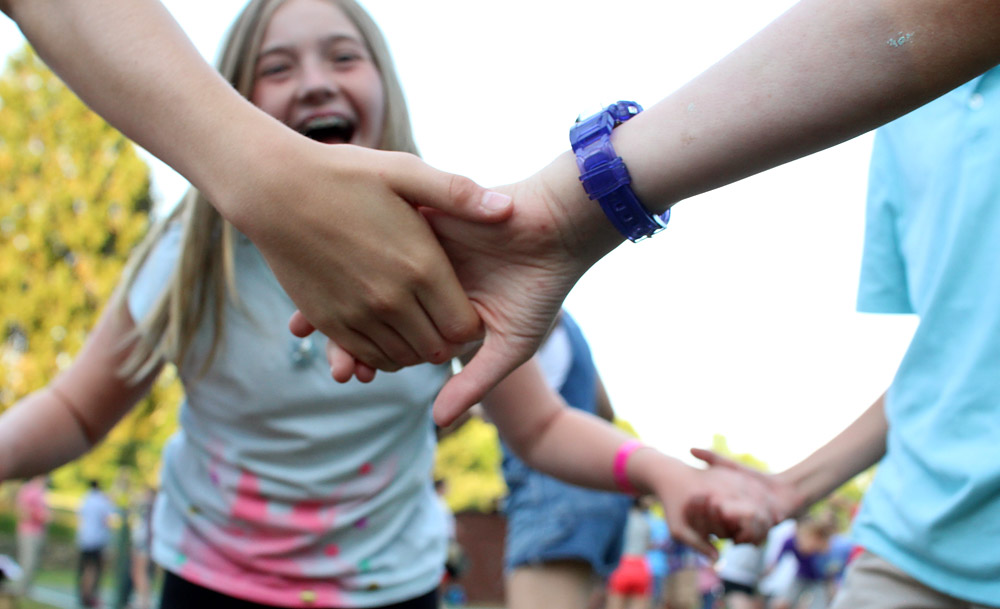 The big event of the day, however, was the dance we had with the boys at Camp High Rocks, located just a short drive away from Rockbrook. All of the Middlers and Seniors made the trip (in 12 vans and buses!), while the Juniors stayed in camp for a campfire with storyteller Susan Huter. Instead of a disco-ball, pop music dance, the High Rocks boys hosted a square dance outdoors on their tennis courts. Now you might think that this sounds too old fashioned to be fun for a group of 11- to 16-year-old girls. In fact, several of our campers expressed that same sort of doubt in the van ride over, but once they gave it a try, heard the music, and realized that everyone was inexperienced and prone to “mess up” the moves, the girls found they were having a great time. There’s much less girl/boy pressure in this setting. It’s more lighthearted, friendly and conversational. Laughing and smiling set the tone. A short break for cookies and peach lemonade helped recharge everyone partway through, and before we knew it, it was time to say goodbye and ride back down the mountain to Rockbrook. I think most of the girls would agree, even after their initial hesitation about square dancing, the whole evening was friendly and relaxed, and terrific.  It is nice to see that even these modern, technology and pop culture fueled, girls can enjoy something as traditional, humanly simple, as square dancing. That’s another great thing about camp; it’s a wonderful reminder of how something basic can also be delightful. 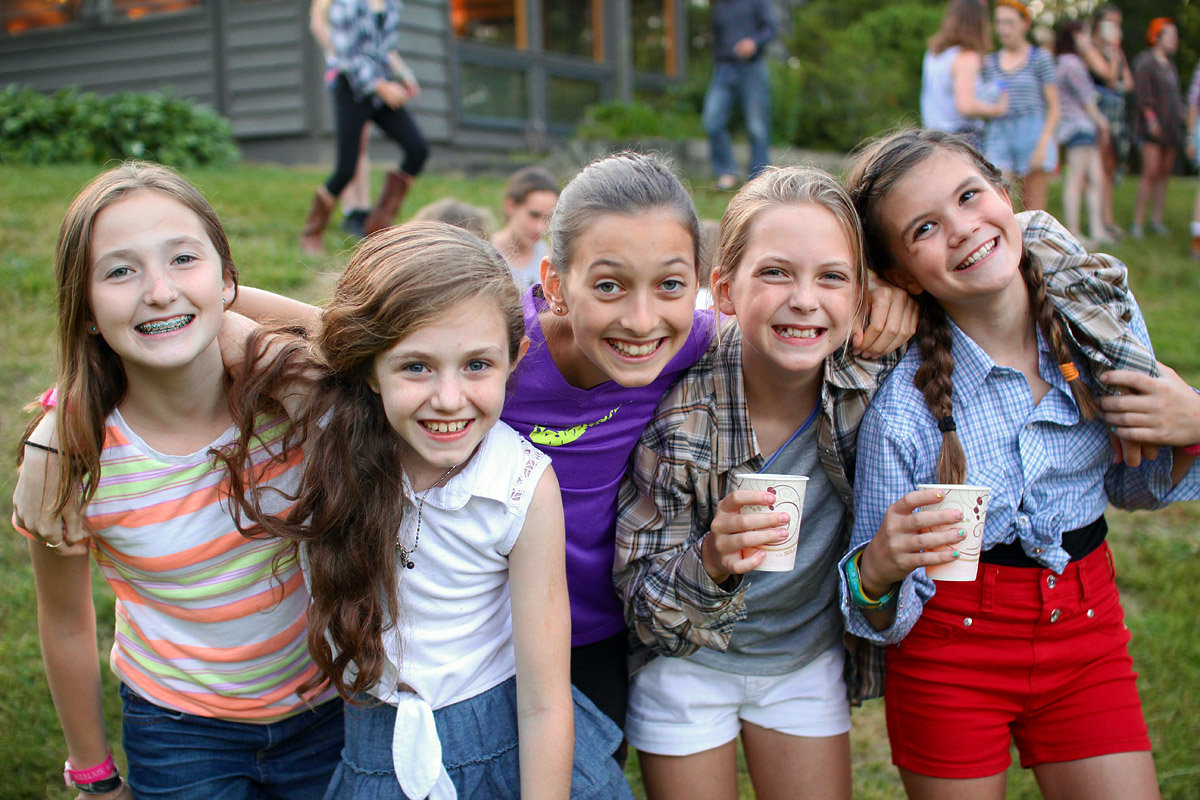