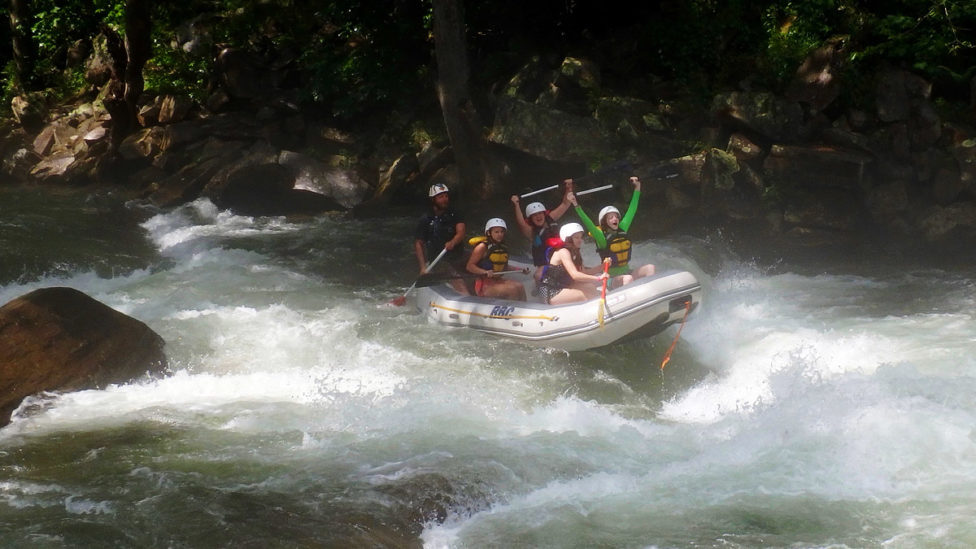 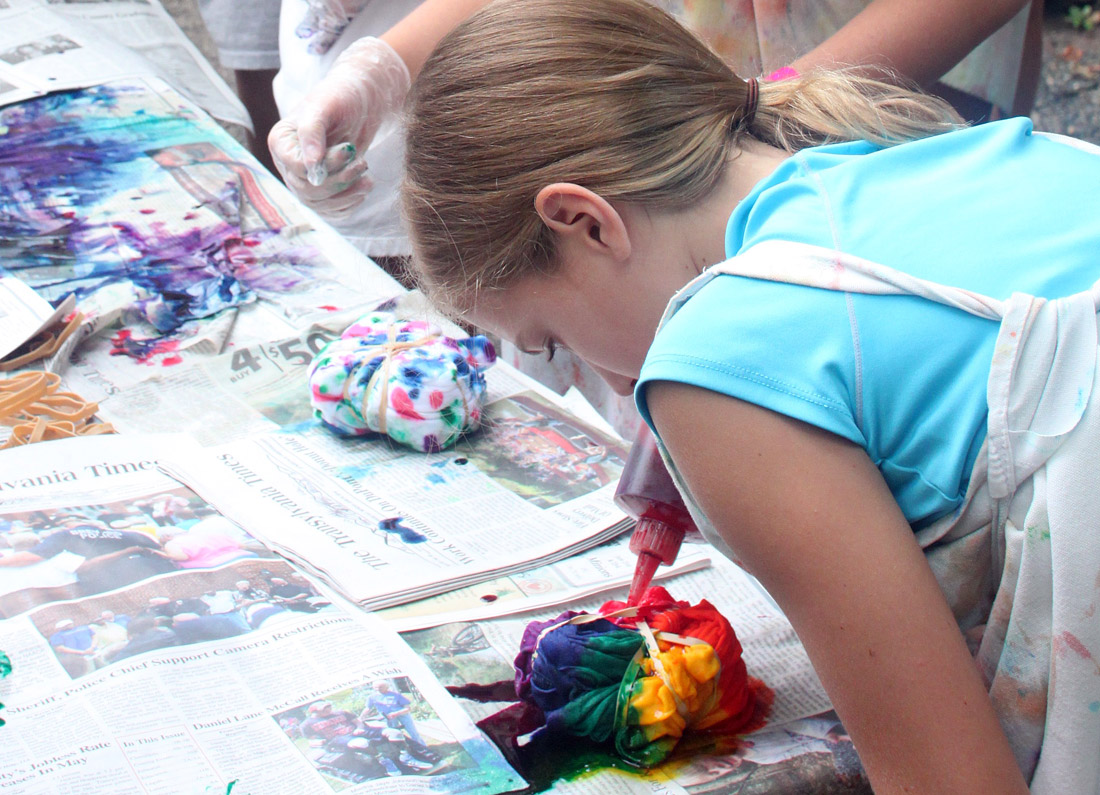 Here’s a common question we hear at camp; “Can I tie dye my __________?” Tie dying is part of the Hodge Podge craft activity, and mostly we have white t-shirts available for the girls to dye, but this question has also been framed with answers like, “my shorts,” “my underwear” (of course!), “my socks,” “my backpack,” and even “my shoes!” We love that kind of creativity around here, so often the answer is “Maybe! Wanna try it?” The results could be described as “mixed,” but it’s certainly fun to experiment with the squeeze bottles of bright colorful fabric dye. When it comes to shirts, the results have been spectacular lately… chevrons, spirals, bullseyes, waves, smilies, and plenty of random patterns, all with great, vivid colors. Making a tie dye has a fun surprise built into the process too— when the t-shirt, or other garment, is untied and you get to see the cool pattern created from the dye being absorbed or resisted. One group of girls today looked particularly pleased at their untying. Look out for some fun new fashions heading home to you at the end of the session! 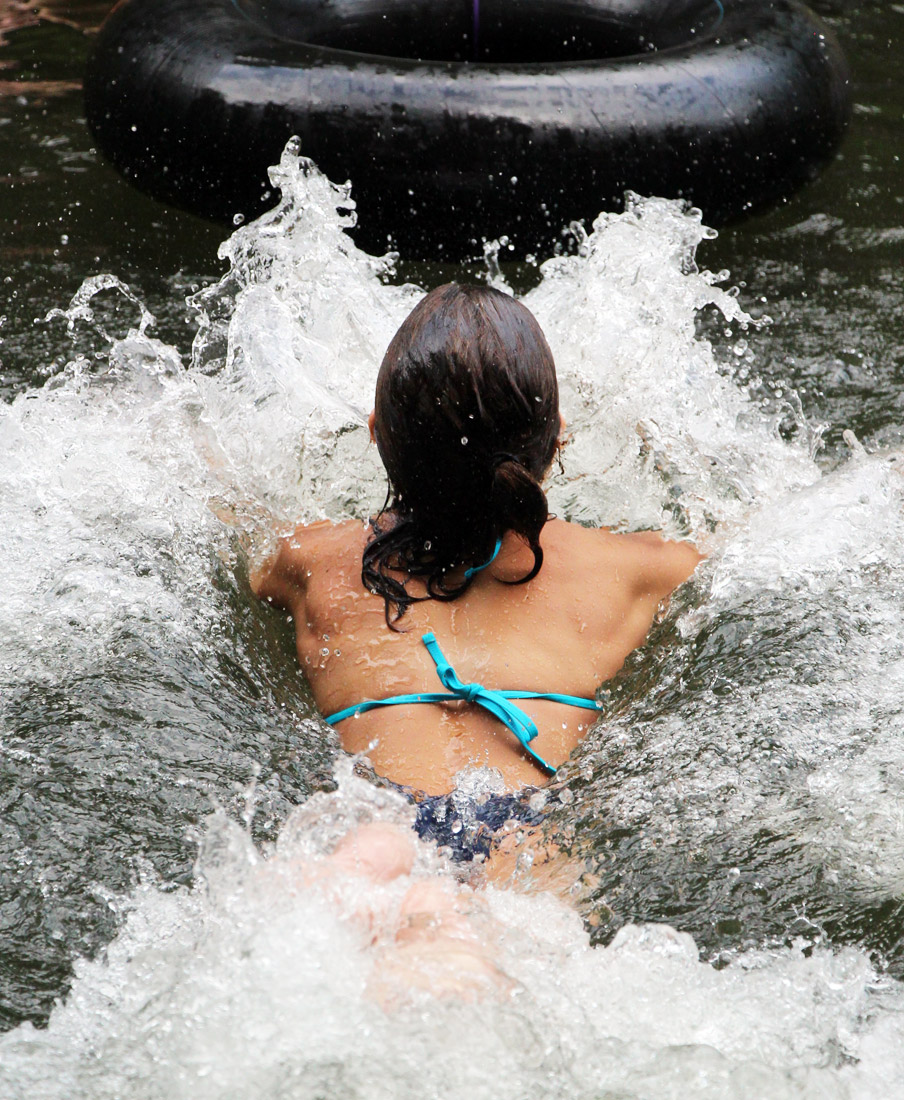 The Rockbrook lake continues to be a popular spot throughout the day. As so many other parts of the country are baking in the summer heat, we’ve been hitting high temperatures in the mid 80s. That’s not too hot for around here, but with the humidity, a dip in the lake has felt excellent. The girls have been hard at work swimming their “Mermaid Laps” (A certain number admits them into the “Mermaid Club.”). They been perfecting their silliest jumps from the diving board, and repeatedly zipping down “Big Samantha” our giant water slide. There has been some mischief underway too with a bunch of squirt toys, athletic skill shown using kick boards, and plenty of cooling off and relaxing in the inner tubes.  In addition to the regular four activity periods when the girls can sign up for swimming, the lake is open to everyone right before lunch and dinner for about an hour. I’d say with all of these options and opportunities, most everyone at camp is visiting the lake these days.

The great warm weather lately has also inspired us to offer the girls several waterfall and creek hikes. Right here on the camp property, the WHOA (Wilderness, Hiking, Outdoor Adventure) instructors have been bringing girls to Rockbrook Falls. It’s a nice set of small waterfalls that cascade down multiple levels into pools… perfect for a refreshing dip. For several Junior campers, the creek in the center of camp is a place to play, stack stones, and race sticks (or their shoes!) in the current. 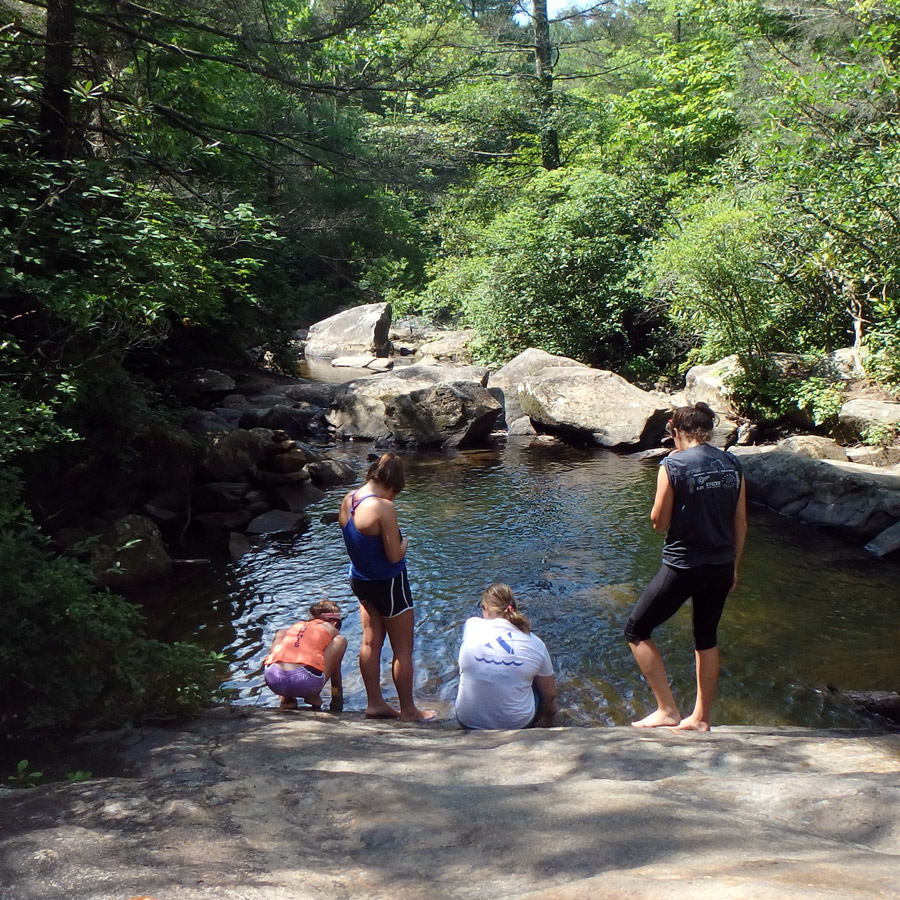 A few miles south of camp, the Dupont State forest has magnificent high waterfalls like Triple Falls and Hooker Falls. In the Pisgah Forest, a group of Juniors visited Moore Cove to feel the spray of the waterfall there. And we’ll be heading to sliding rock tomorrow night for the ultimate waterfall experience.

Every year when we survey the campers about their favorite outdoor adventure activity, whitewater rafting wins the number one spot (Ziplining has become #2, by the way). That’s not too surprising when you consider how perfectly it combines several amazing things. First, just being outside is great, but when you have the natural beauty of the Nantahala Gorge, the steep rocky slopes rising on both sides of the river, it’s extraordinary. There are massive trees (poplar and hickory come to mind), thick rhododendron thickets, and flowering silk trees. There’s bound to be a King Fisher that swoops by chirping, and a sharp eye may spot a turtle or water snake hiding among the sticks and leaves of an eddy. Some of this probably slips right by most of the campers because the real focus is the crazy, bumpy ride in raft. The girls take turns “riding the bull,” which means sitting on the front of the raft with their legs dangling, an intrepid hood ornament that’s bound to get the biggest splash in the rapids. Falling out of the boat is part of the fun too… for that matter, so is falling into the boat unexpectedly after hitting a hidden rock. Let’s not forget the temperature of the water either: a frigid 50 degrees thanks to the majority of the water coming from the bottom of the deep Nantahala lake (as part of the Duke Energy hydroelectric project). Hitting that water, even when it’s sunny and hot outside, is a wide-eyed, breath-taking, shock, just as it’s an excellent thrill.  Add to that the fun that comes from singing and laughing with friends in the boat. For the two hour trip down the river, the girls are splashing each other, waving for photo opportunities, making “high fives” with their paddles, and doing “fire drills” to switch places in the boats. Yes, it’s outdoor adventure, but taken altogether, this is super fun too. Since we took almost half of the camp rafting on the Nantahala today, it was fun… just like that. 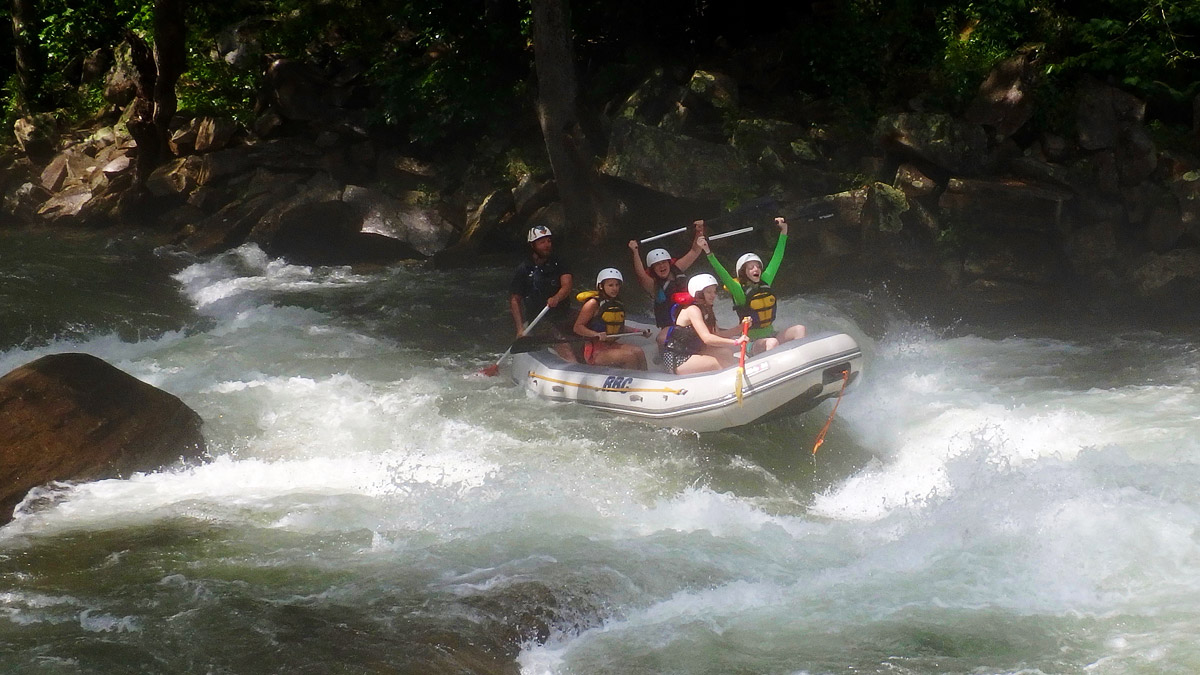 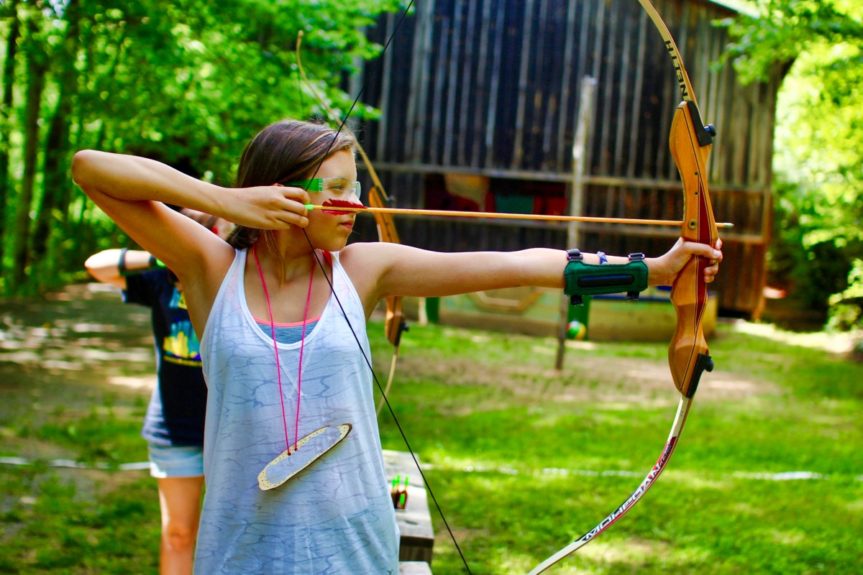 What an absolutely perfect camp day! Completely sunny weather, a beautiful forest setting— the massive rocks, old-growth trees, flowering mountain laurels, cool creeks and waterfalls, ferns, and so many wonderful birds, and so on! —cheerful, encouraging counselors, and the energy of all these great campers, combined to set the day. Then, with dozens of different activities all happening simultaneously, the camp was alive everywhere with happy smiling girls. 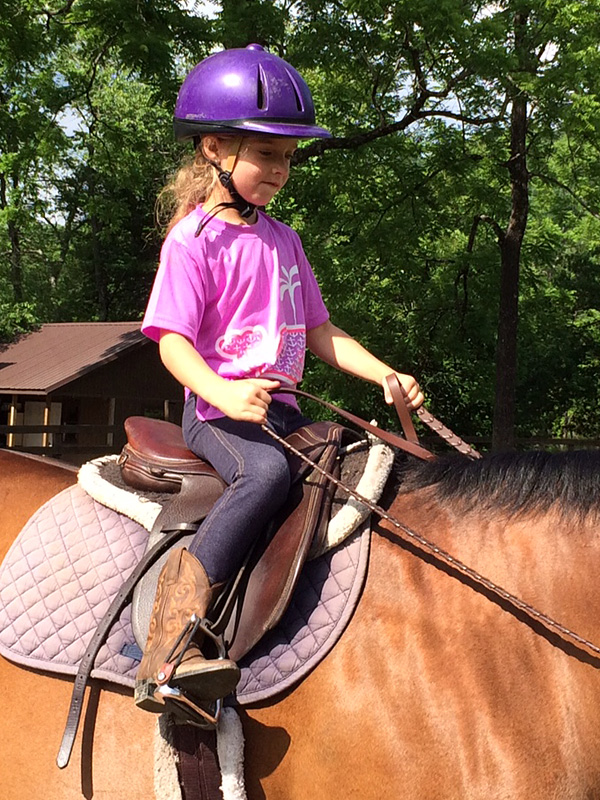 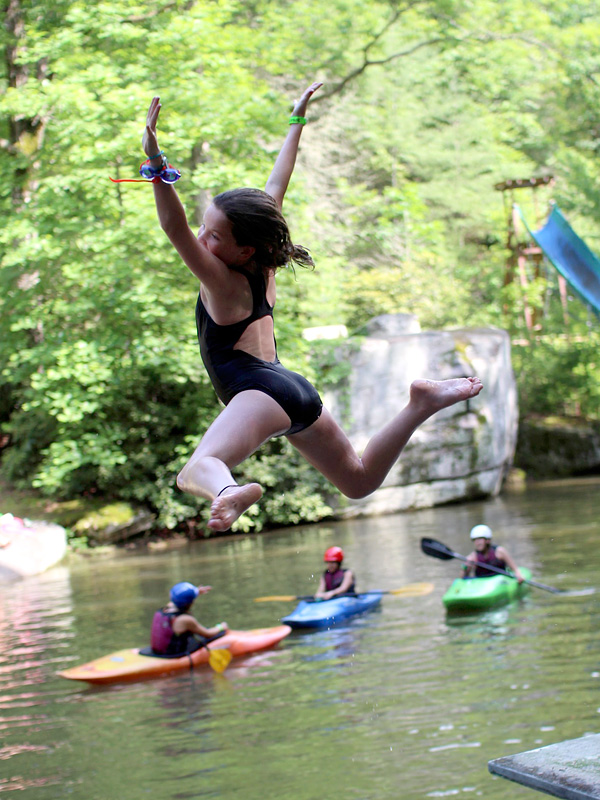 Most of our 28 horses met their newest fans while they walked, trotted and cantered around the horseback riding rings. The pottery wheels spun, the looms clicked, while rifles and arrows shot. Sequences of knots became friendship bracelets, and yoga mats lay flat for stretching and relaxing poses. Dots of paint, strips of tape, vibrant dyes and patterns of string decorated paper and cloth. Belay ropes led climbers up the Alpine Tower, and kayak skirts stretched tightly over our colorful whitewater boats. With bright blue skies above, the diving board, waterside, and lake toys kept girls happily splashing and delightfully cool. So much action! 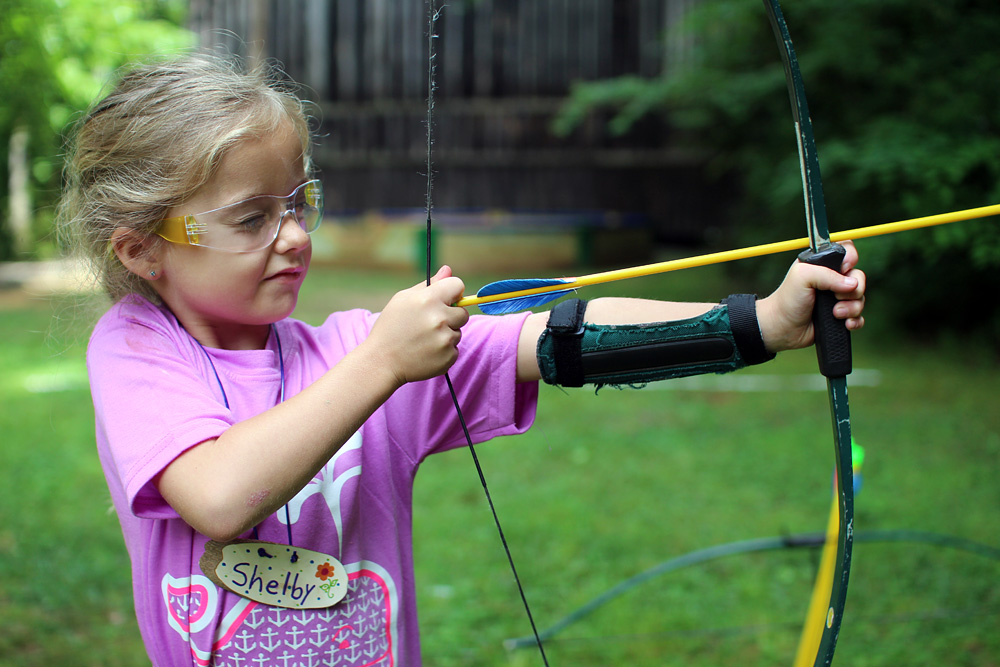 Be sure to get a sense of all this action by spending some time browsing through the photo galleries posted for today. Have you seen them? You access the galleries by logging into your parent account. If you haven’t logged in yet, I think you’ll love the new way the system displays our photos. Each day there are several albums to view, enjoy and share by email or on Facebook. If you see particular photos of your daughter, or others that you like, go ahead and add those to your “Favorites” so you can see them all together at the end of the session. Also, I would suggest checking back often because we are uploading photos multiple times every day! 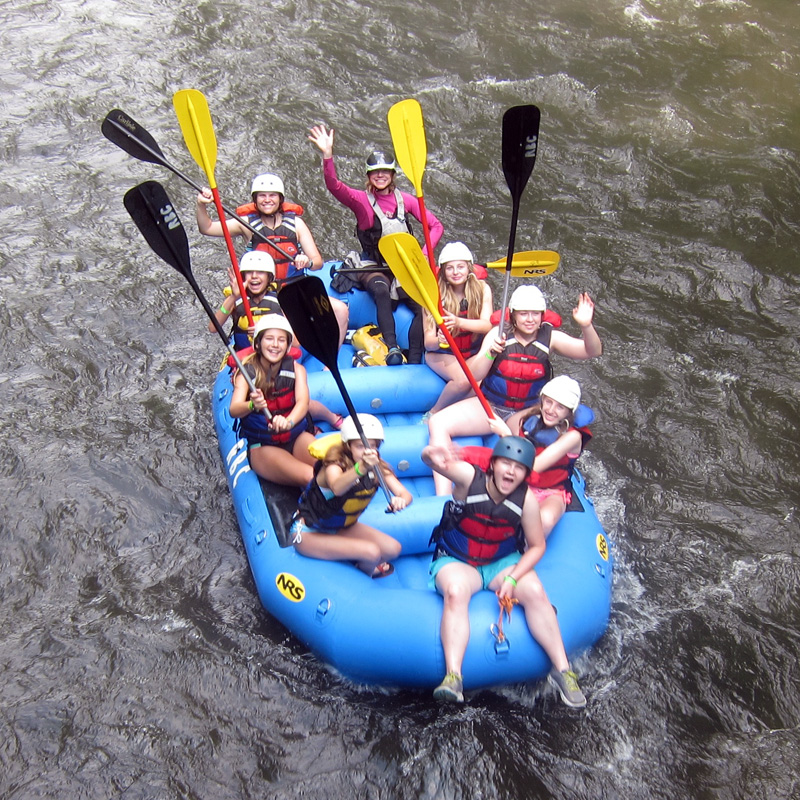 Over at the Nantahala River today, there was even more outdoor adventure action because almost 60 campers took a trip down in rafts. Led by our team of experienced rafting guides (Clyde, who has more than 30 years of experience, along with Andria and Leland Davis, Nicole, Jamie and Thea), two groups of campers enjoyed bouncing and splashing through the rapids, like Patton’s Run, Delbar’s Rock, the Quarry Rapid, and the exciting Nantahala Falls (also known as “Lesser Wesser”) at the end. Rafting with Rockbrook girls is a little like a floating party, often pretty loud with singing and powerful screams, sometimes involving dancing and acrobatics (like falling into the river!), but always a complete blast because you’re laughing with your friends at every bump of the river.

Dinner tonight brought out the costumes —the first of many opportunities to dress up this session— with the campers and counselors dressing as superheroes. Sure we had Batman, Superman and Captain America to name a few, but we also saw Captain Underpants, Caped Vowels, and several versions of Wonder Woman. The dining hall was filled with strong, powerful, extraordinary woman, all super in different ways. More than that, we also made dinner tonight a celebration of everyone’s birthday by rearranging the tables so we could sit grouped according to our birth month. This mixed cabins to make tables with both younger and older new friends to meet, and, perhaps most importantly, with whom to share a homemade, highly decorated, birthday cake. With songs and shout-outs to different celebrities’ birth months (for example, “Happy Birthday Taylor Swift!”), we kept the whole meal lively, and definitely a little silly. It really was a blast. 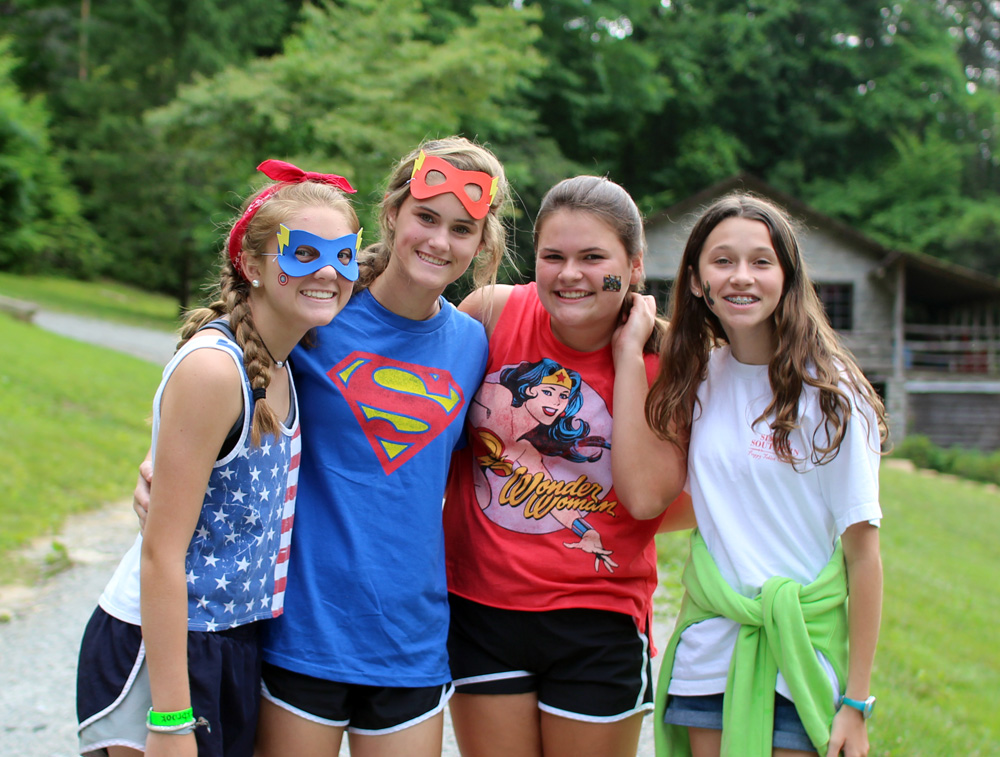