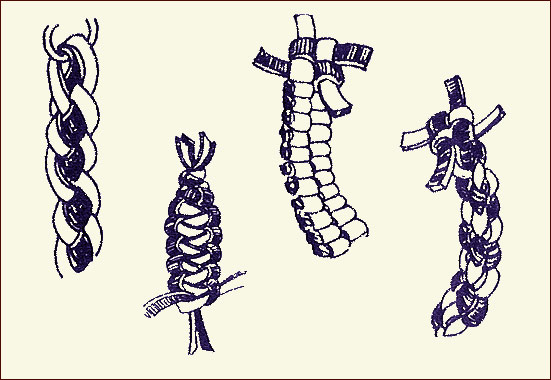 It just wouldn’t be camp without making a lanyard. That flat colorful cord, twisted and tied, seems to be a part of every girl’s summer arts and crafts. Even camp alumni speak fondly of learning to make decorative lanyards.

There are lots of patterns to tie also. Have you seen these four?  That first pattern to the left is called the “Diamond Braid” or “Round Braid.”  Like most of these braids, getting started is the hardest part.  This one is unique too because it’s more braiding that tying knots, and will require a knot at the end to keep it from unraveling.

The second one is usually called the “Cobra Braid” because it makes a flat lanyard reminiscent of a cobra’s head.  Some people also call it the “Ladder Knot.”  If you know how to tie a square knot, or even how to tie your shoes, you’ll be able to make this lanyard.

The third pattern is probably the best known camp lanyard pattern.  Known as the “Box Braid” or the “Square Braid,” it makes a regular 4-sided strand.  The important things for this arts and crafts project is keeping your strands straight and your knots tight.

The last pattern shown here is a variation on the box braid, and is usually called the “Round Braid.”  To make it, use the same 4-strand weaving knot, but each new knot makes a slight turn crossing over (rather than parallel to) the previous knot.  Like all these patterns, you repeat the knot and braiding over and over until your lanyard is long enough or you run out of cord.

Don’t forget that these are just starting points. You can combine them, switch from one the other, add a twist to a strand, or maybe even add a bead to create your own summer arts and crafts project. Go ahead and experiment, and you’ll have something really cool.

Leave your reply on “How to Make a Lanyard!”