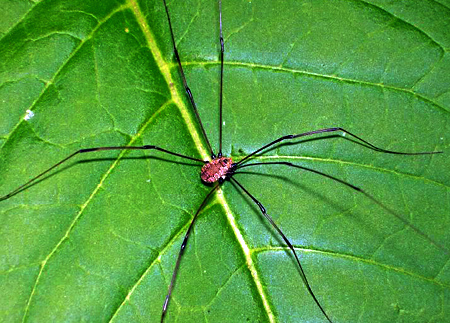 Probably the most common arachnid (the class that includes spiders) you see around Rockbrook is this little guy. You probably recognize him as a “Daddy Long legs Spider.” And you’ve also probably heard that they are the “most poisonous spider in the world,” but (luckily!) they are not dangerous because their “fangs are too small and short to bite through people’s skin.” With that kind of reputation, this is definitely a little scary no matter what.

The problem is; it’s not true. Also known as Harvestmen, these little guys do not in fact have fangs or any venom at all. It is true their mouth parts are quite small, so they can’t bite you. Overall, they’re totally harmless. They also don’t spin webs because they lack silk producing glands. It fact, technically speaking they aren’t even spiders! They do have eight legs and are in the same biological class as spiders, but are in a different order. It’s just a big misconception that seems to be repeated every summer at camp.

There are more than 100 species of Harvestmen in North America, and they are particularly common in rich deciduous forests (like Rockbrook!) where there are lots of other small insects, fungi, and plant matter they like to eat. When you’re at camp this summer, keep an eye out for these fascinating, and harmless, forest critters.

Leave your reply on “Rockbrook’s Harvestmen”