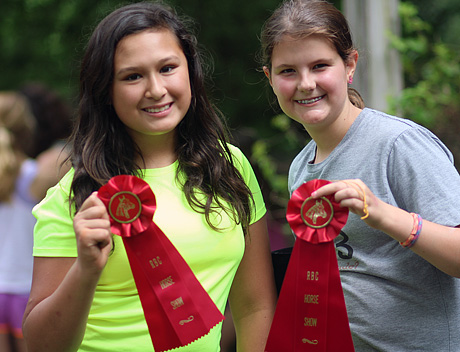 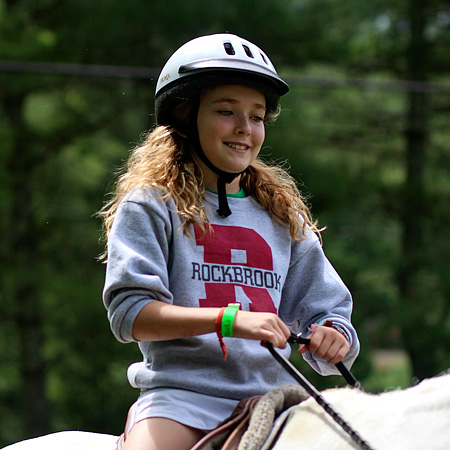 For quite some time now, Rockbrook has remade its “Horse Show” held at the end of its sessions into something non-competitive and more celebratory. Instead of riders set against one another, we allow girls of all abilities to show their skills and to be recognized for their equestrian accomplishments. With other girls from camp watching, they may simply canter around the ring, walk over poles, or wow everyone with an impressive jump. We provided cool red ribbons for all of the participants who rode in the show today. For others, the equestrian staff also brought out one of our Welsh ponies, whose name is Cool Beans, to let the girls paint him with bright hand prints. Cool Beans was pretty patient (cool!) through all of this, and with multiple different color hand prints all over him, looked fabulous (cool!) too. 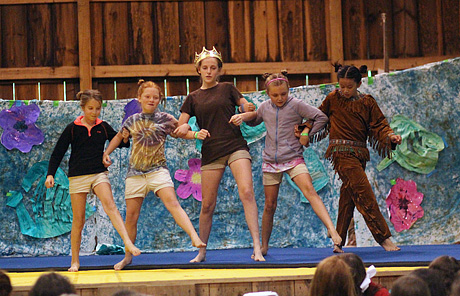 Today our drama instructors had a few jitters as they made final preparations for the performance of this session’s musical, The Jungle Book. They took over the gym early this morning to transform the stage into a jungle scene with trees, vines, rocks and other flowering plants. Throughout the session, girls have been learning songs, practicing choreographed dances, and memorizing speaking parts for several characters from the well known musical version… The bear, Baloo, the boy Mowgli, the python Kaa, the tiger Shere Khan, the girl Shanti, and plenty of monkeys and elephants. The entire cast sang versions of the classic songs like “I Wanna Be Like You” and the “Bare Necessities.” After the performance, which brought cheers and applause from the other campers and parents watching, I noticed more than one person humming along to one of the songs. 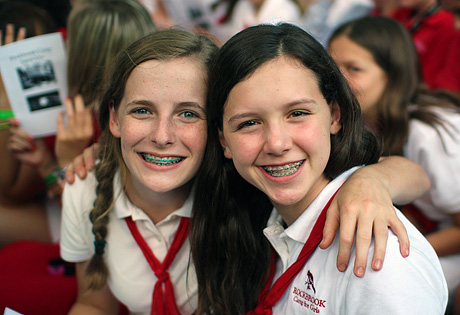 Tonight, our final night of the first session, was also the night of our closing campfire, our “Spirit Fire.” Dating back to the very first summer of Rockbrook in 1921, this special campfire is a time for everyone to reflect upon their time at camp, sing some of the “more serious” or traditional songs, and often get a little sad about camp ending. It’s a magical setting, with crickets chirping in the background, the sun setting into twilight, and more than 250 voices singing softly around a blazing fire. Some girls stand and speak at the Spirit Fire, happily and easily expressing their love for camp and the strong feelings of friendship they have for so many people here. It’s astounding to see how meaningful all of this is to them. The Spirit Fire is a special time when all of the excitement and fun of the last few weeks steps aside to reveal the emotional connections that make our time together so important, so good, and in the end, so adored. 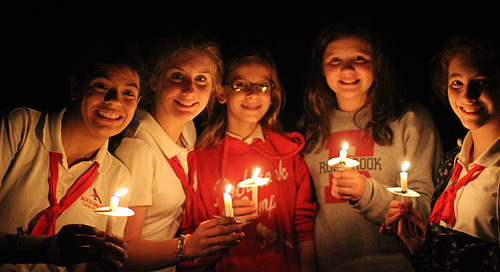 Leave your reply on “So Adored”