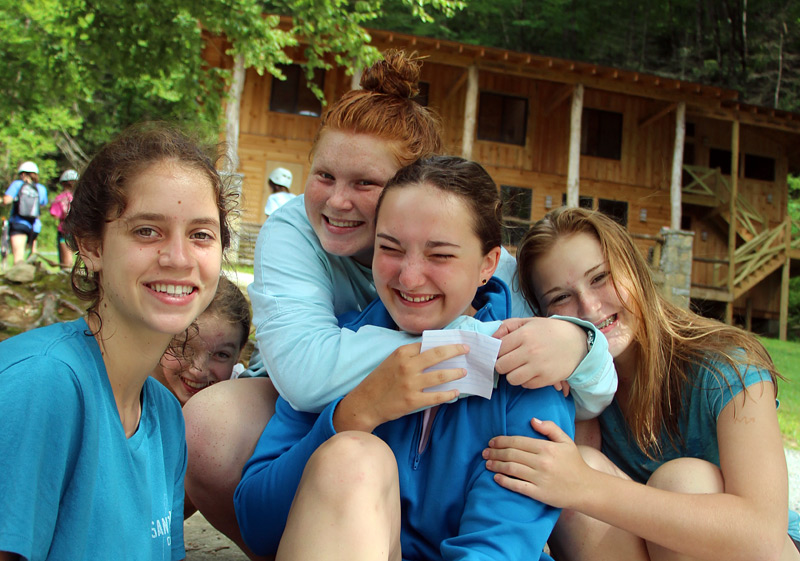 A Middler-aged camper asked me the other day, “Isn’t it hard to get Seniors to come to camp if they can’t have their phones?” I reminded her that all campers, no matter how old they are, and in fact the counselors too (except in the staff lounge), are not allowed to have a cellphone at camp, but I think I know what she meant. She knew, maybe from experience or observing older girls at home, that cellphone use is almost constant, that most of us, once we have a personal smartphone, tend to use it all the time… text messages, social media posts (Instagram, Facebook, Twitter, Pinterest, Snapchat!), telephone calls, and email. Once it’s in our pocket, the buzz of electronic notifications punctuates our daily experience. This perceptive young girl was suggesting that the allure of that buzz might be powerful enough to prevent girls from attending camp.

It’s a great question when you think about it, “Why are teenage girls willing, albeit reluctantly perhaps, to give up their phones for several weeks?” Would you be willing to do that? Think of all the news you would miss, and the people who couldn’t contact you! I suppose there are young girls out there who do not attend summer camp because they feel they simply can’t live without their phones, just as they might believe they can’t do without their mother’s home-cooked meals or an air-conditioned private bedroom, but there are hundreds of girls who do make that sacrifice. Here’s why. I believe it’s because they, perhaps unconsciously, know being at camp is much better than whatever their cellphones (and other electronic forms of entertainment) provide. The sacrifice is “worth it.” Their community of Rockbrook friends provides a book of faces far superior to Facebook. The daily flood of enthusiasm for creativity, adventure, and outdoor action outshines every Instagram image. The camp songs, the heartfelt conversations, the nightly “Highs, Lows and Funnies” in the cabins, the cheers and support from everyone around you arrive faster than you can type 140-character tweets. A girl could snap, and pin, and “like,” and “share,” all day long and she wouldn’t come close to feeling the authentic joy camp provides. Without flickering intermediaries, camp is real life, fully lived with real people, expressing real emotions. It’s a life too easily forgotten while staring at a screen, but for those girls willing to trust themselves and find the confidence to engage those around them, camp is also a really good life. Some claim it can’t be beat! …completely phone-free. 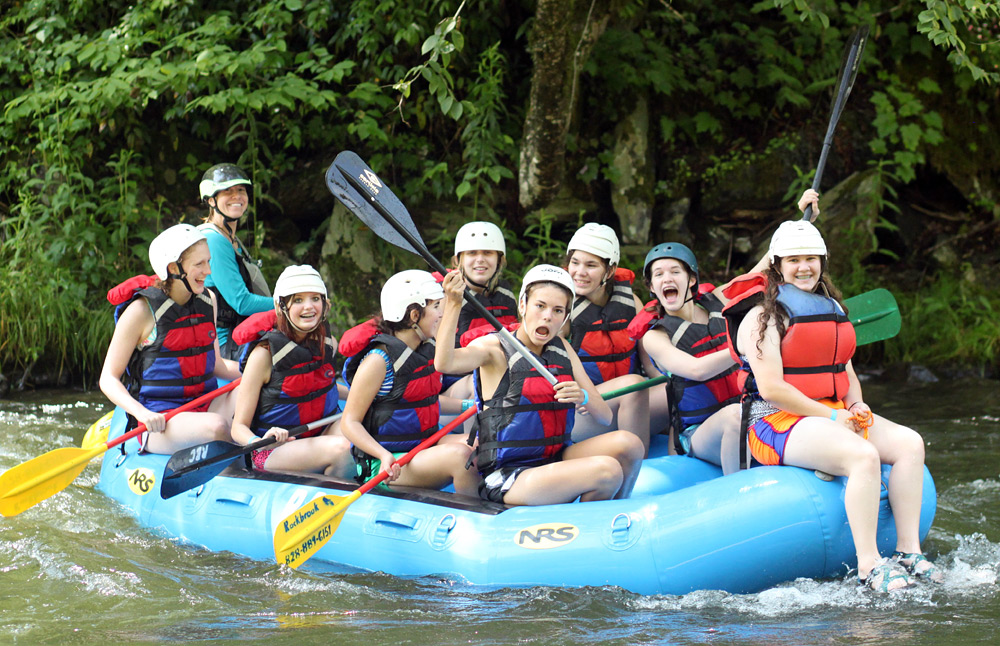 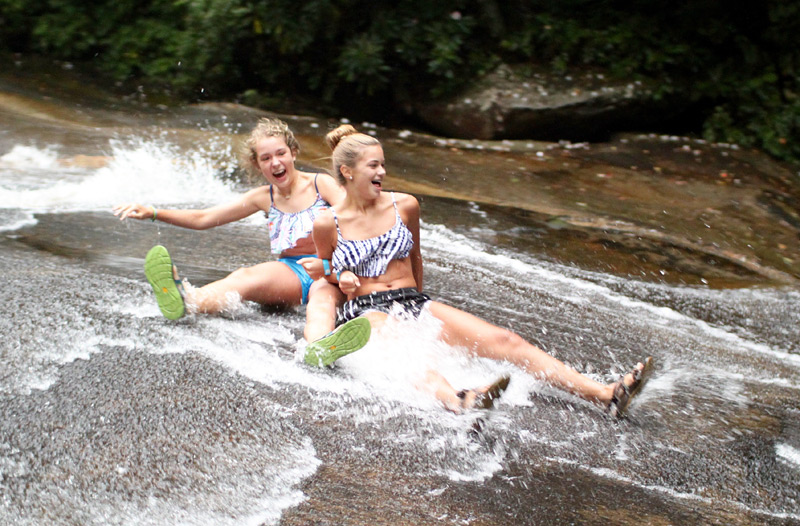 For about a fourth of the camp, today’s adventures included whitewater rafting on the Nantahala River. With our second group of July Mini session girls eager to raft and a few of the full session campers who had not yet gone, we put together two multi-raft trips, one that began the night before with camping at our outpost property located near the river in Swain County, and the other that ran in the afternoon following a picnic lunch at the water’s edge. The morning trip saw a little extra excitement as a passing thunderstorm forced the crew off the river for a few minutes. Fortunately, we had a warm, dry bus (It was trailing the trip on the road paralleling the river.) ready nearby where we could all take shelter during the storm. When the coast was clear, the rafts were off again to finish paddling the river.

Rafting for Rockbrook girls is big fun. It’s a nice combination of high adrenaline adventure (wearing cool gear!), lighthearted silliness with your friends in the raft, and hilarity as each bumpy rapid and splash of the frigid water (53 degrees!) erupts wild screams of delight. It’s even better when someone unexpectedly falls out of the boat and everyone, while laughing of course, scrambles to pull her back in. Rafting is also a chance for the girls to chat and sing with each other as they paddle, posing for photos and greeting everyone passing by in other boats and onshore. You can imagine how this much exuberance gets people’s attention, and since we’re the only girls camp authorized to raft the Nantahala (We’ve had a USFS permit since the early 1980s), it’s not uncommon for us to hear, “That’s the rafting camp.”

When it comes to having a full camp day, our mini session Senior campers know how to do it! For them, following today’s rafting, we ate a quick pizza dinner, and then turned right around for an evening trip to Sliding Rock. It was fantastic. We arrived just after another rainstorm so we had the rock all to ourselves. The girls had a blast sliding down the 60-foot natural water slide to the pool at the bottom, often with hands in the air and screaming all the way down. Everyone slid as many times as they wanted, until as it was getting dark, we loaded up the vans for a short ride to Dolly’s Dairy Bar. A cup or a cone of “Rockbrook Chocolate Illusion” or another flavor was the perfect way to top off the evening. Back at camp about 10pm, the girls took no time heading straight to bed. It’s been another full— definitely great— camp day. 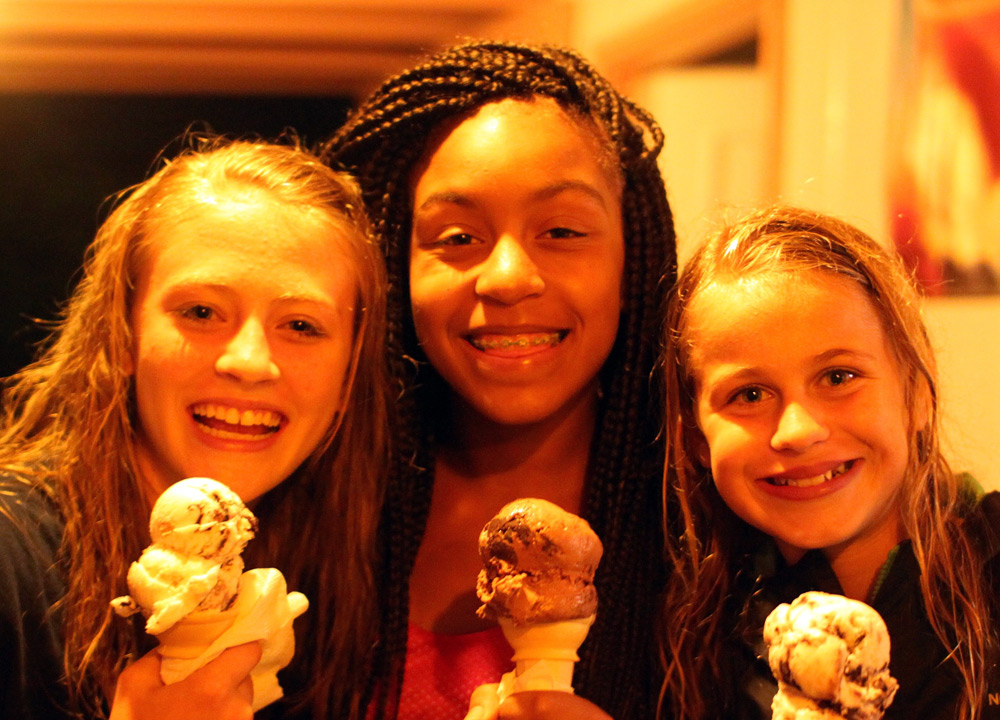 Today was a day of boating over on the Nantahala River. While the regular activities kept folks busy in camp— horses ridden, rocks climbed, games played and arts created —Clyde, Kelsey and Christine took a group of our more advanced kayakers out for the day. These are girls who have spent plenty of time working on their paddling skills and who have run other whitewater rivers. Several of the rapids on the Nantahala require precise paddling along specific lines. They require catching eddies and real concentration despite the roar of the whitewater. With Clyde leading (have you read Clyde’s profile?) and with Kelsey and Christine also instructing, the campers had outstanding models to follow and were well supervised. All day the campers paddled superbly, showing their enthusiasm and proving their skills on each challenge. The final, and largest rapid on the river gave everyone some trouble, but with the exception of the very last wave, all the campers handled it very well.

Meanwhile, another group, this time of Middlers, was rafting the Nantahala at the same time. Most of these girls, in contrast, had never been rafting or experienced the thrill of whitewater boating. We met our regular crew of guides at the put-in and geared everyone up with helmets, PFDs (life jackets or “personal flotation devices”) and paddles. Steff gave the group the safety talk explaining how to hold the paddle, how to sit in the boat, and what to do if you fall out into the river. Each boat of five or six campers has an experienced Rockbrook guide, so even if the girls forget something from the safety talk, there’s an adult right there to assist. Do you know how to catch a throw rope? Your camper does! The weather was nice and sunny, always a welcome buffer to the chill of the Nantahala’s water.

The girls back at camp, also enjoying excellent sunny weather, had a picnic lunch out on the hill. Rick and the other kitchen folks whipped up mounds of homemade coleslaw and grilled hamburgers for everyone.  Add some cheese, lettuce, sliced local tomatoes, mayo, ketchup and mustard if you like, grab a cup of lemonade, and you’ve got a classic summertime meal. Top it off with a slice of watermelon, and what could be better?

Today was also circus dress up day at camp, a chance for the girls to pull out their costume accessories and become their favorite circus character. The were several brightly colored performers, mostly in leotards and tutus, but probably the most common costume was dressing as a clown. We saw huge funny shoes, goofy hats and plenty of over-sized glasses. There weren’t any wild animals to be tamed or do tricks, but we did see at least one pink fuzzy creature!

This month we’ve had 33 girls who have had their birthday while at camp. While some days there might be none, on others there are several girls on the same day (like 4 today!). The kitchen is always sure to bake each birthday girl a cake, and usually members of her cabin get together to help decorate it in true Rockbrook style, i.e. lots of frosting and candy 🙂 . The cabin mates often make a big colorful sign to hang in the dining hall as well. When the cake is brought out, candles lit, the whole dining hall sings Happy Birthday and ends with the chant, “Tell us when to stop!” One giant handclap, in unison, for each year— it’s a real celebration. Have you seen the Rockbrook Camp Youtube Channel? It’s got several short videos we’ve uploaded, including a birthday song to Carrie. Go check it out!