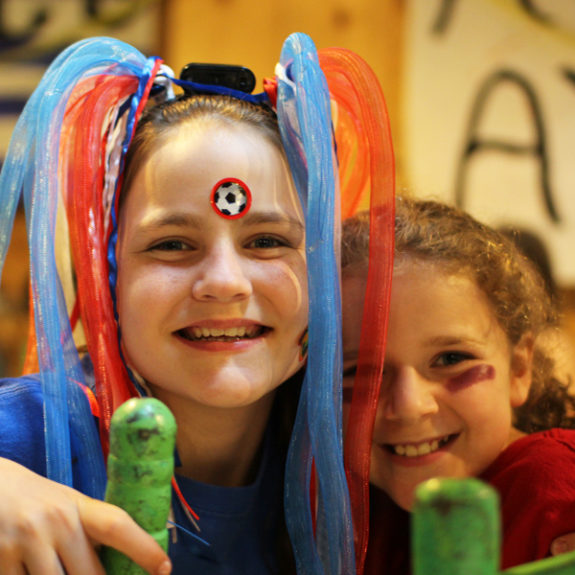 If you compare the highest mountains east of the Mississippi River, twelve of the top twenty are located in North Carolina, and one, Chestnut Bald (elev. 6040 ft.) is right here in Transylvania County. Many of these peaks are accessible from the Blue Ridge Parkway, a wonderful scenic drive that winds along the ridge lines of the southern Appalachian mountains in NC and VA through tunnels, over bridges, and by scenic overlooks for 469 miles. Today, Clyde loaded up a bus of Juniors and Middlers to reach the Parkway and hike a bit exploring one of the highest peaks nearby, Black Balsam Knob (elev. 6214 ft). As you can see from this photo, the weather for this trip was spectacular, sunny and mostly clear, making the long range views incredible. Stopping on one of the weathered-grey outcroppings of rock to point out a distant feature (like Shining Rock, for example), means being so high up, you literally look down on just about everything. With puffy clouds almost close enough to touch, it’s a little disorienting, but also the kind of thrill that makes for a memorable day out.

One of the activity options girls can select at Rockbrook is called “Sports and Games.” It includes field sports like soccer, softball, and kickball, and field games like tag, frisbee, and badminton. It can also be gym sports like basketball, volleyball, dodgeball, and hockey. Today the sports instructors Reesa and Adina organized an indoor soccer game in the gym, a fast-paced game where the ball can bounce off the side walls. Similarly, another game being played a lot lately (partly because we introduced it this summer) is Gaga or “Ga-Ga Ball.” It also is a ballgame played by strategically hitting a ball off the court’s (or pit’s) walls, only using your hands instead of your feet. In fact, just the opposite of soccer, in Gaga, if the ball hits your foot or leg, you are out. The goal is to hit the bouncy ball around the octagonal pit without letting it hit you. Hit the other players with the ball while avoiding being hit yourself. It’s really fun, and the girls are very much into it. Play continues until only one person who has avoided being hit is left.

The awesome weather held at camp too, making the lake a very popular place during the first Free Swim period before lunch. Free swim allows girls who aren’t signed up for swimming during their regular activity slots to come down and enjoy the lake, perhaps by showing off goofy jumps from the diving board, setting a record for the most trips down the water slide, or just floating on an inflated tube in the sun. At noon, which is when this free time happens, the sun is directly overhead making the whole waterfront warm and attractive (buffering nicely the chilly water of the lake!).

This block of free time before lunch also gives the campers a chance to spend time finishing a craft project they began during one of their classes. For example in Curosty, the fiber arts cabin, the looms seem to never rest. It takes time to weave a good piece of fabric, so campers are often slipping back in to complete what they started. Some very impressive work is coming off those looms.

To celebrate the World Cup soccer tournament currently taking place in Brazil, we turned dinner tonight into a “World Cup Party.” Replica flags from different countries decorated the dining hall, and the girls came dressed “as their favorite county,” “futbol fan,” or really anything with an international flair. Instead of sitting in their regular cabin groups, the girls sat according to a table they selected at random when they arrived in the dining hall. Chase had a music playlist pumping out upbeat world music (e.g., “Waka Waka,” and “Wavin’ Flag”), and Rick served us an all-American meal of hamburgers with all the trimmings and watermelon on the side. But the highlight of the meal was the dozen or so cakes Katie baked for us, each decorated colorfully like a different country’s flag (e.g. Spain, Great Britain, and Italy, for example) using candy and icing. The girls had a grand time singing along with the music, dancing at times and sharing all of the cakes for dessert. 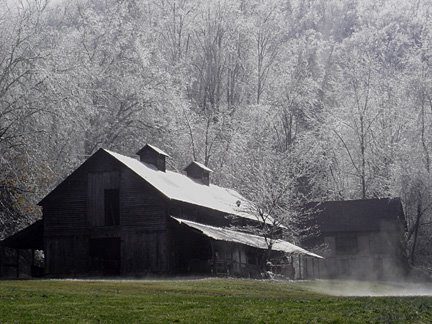 Nurse Jenny recently snapped this photo of the land sports barn. We liked it and thought you’d enjoying seeing a “winter view” of camp.