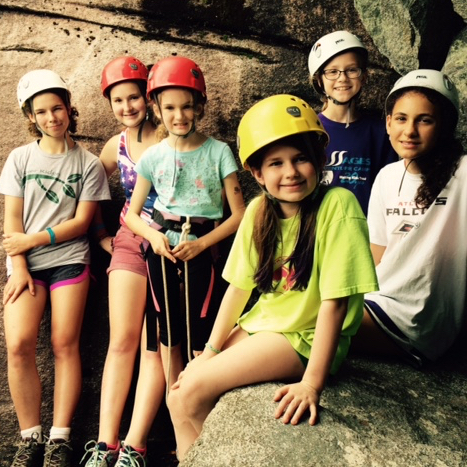 Sometimes here at Rockbrook, there is so much going on, it can be hard to choose between all the offerings. I often hear campers deliberating whether to sign up for trips, or to stay at camp to enjoy all the activities here.

This morning, while a daring group of young ladies was heading down to the lake to take a special early morning “Polar Bear Plunge” into Rockbrook’s chilly waters, girls were packing out for an overnight rafting trip, kayakers were preparing to try their paddles on the white waters of the Green River, and a van was driving off camp for a climbing trip to Looking Glass Rock. Rockbrook girls were having to choose between all these fabulous opportunities before the girls had even eaten breakfast! The best part about camp is that no matter which experience a girl chooses each day, whether wet or dry, on camp or off, scheduled or spontaneous, it is sure to offer her a fun chance to challenge herself, to make new friends, and provide her with a new story to share about her adventure.

Today’s group of devoted young climbers rose before the rising bell, ate a quick breakfast, packed lunch and climbing gear into back packs, and drove off to Looking Glass Rock. This group of six campers—all of whom already had a chance to climb Rockbrook’s own Alpine Tower, climbing wall, and live rock-face, Castle Rock—traveled into the Pisgah National Forest with three climbing staff to test their growing skills on another natural rock. 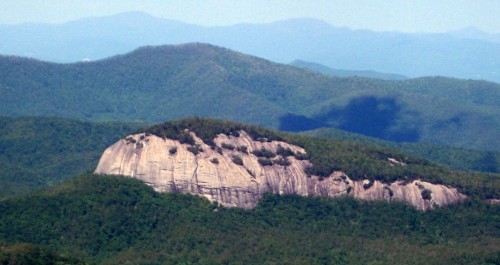 Looking Glass Rock, is a local monolith just shy of 4000 ft in elevation that hosts a wonderful variety of climbs, accessible to many skill levels. Well earning its name, Looking Glass is a massive granite rock jutting out of the valley floor whose many reflective faces offer climbers dozens of multi-pitch, free bouldering, and top-roping routes. After a brisk hike up the mountain from the parking area, we arrived to the rock face to find it was an exceptionally quiet morning for Looking Glass. We had the pick of the mountain. 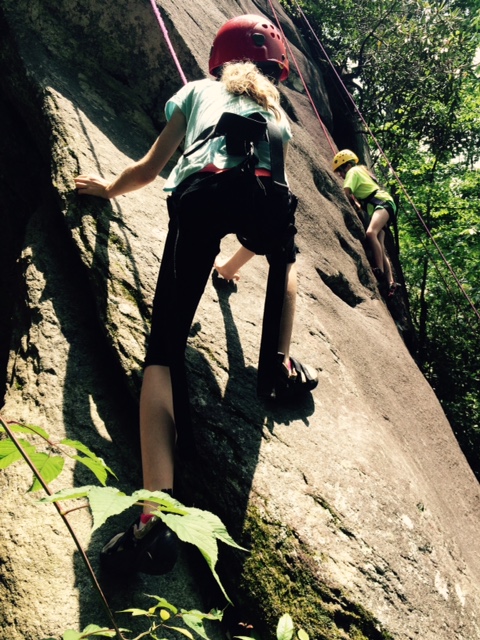 Adventure Director, Clyde Carter, and climbing counselor Rita Keil, deftly scrambled up to set up an anchor on a pair of climbs well suited for today’s group. They set two routes that exposed the girls to different qualities of rock, challenged their skill level, and offered opportunities for success. After everyone had the chance to climb both routes, we moved anchor to try another part of the rock. These climbs were a little more challenging, inviting the girls to explore the limits of their skill and stamina. One of the important things about trying new things at Rockbrook is that we provide a great place for girls to safely push themselves. We create the environment to give them the confidence to try new things, and cultivate the knowledge that even if they are not able to reach the top today, they have reached new heights. At the end of the day, everyone feels good about their own experience, is inspired and supported by those around around them, and is granted the gift of a stunning and well earned view. If you stand on the hill at Rockbrook, you can look across the valley and see Looking Glass glinting in the sunlight. What fun for this group of veteran climbers to now come back to camp, look across the valley and get to say, “I climbed that!“ 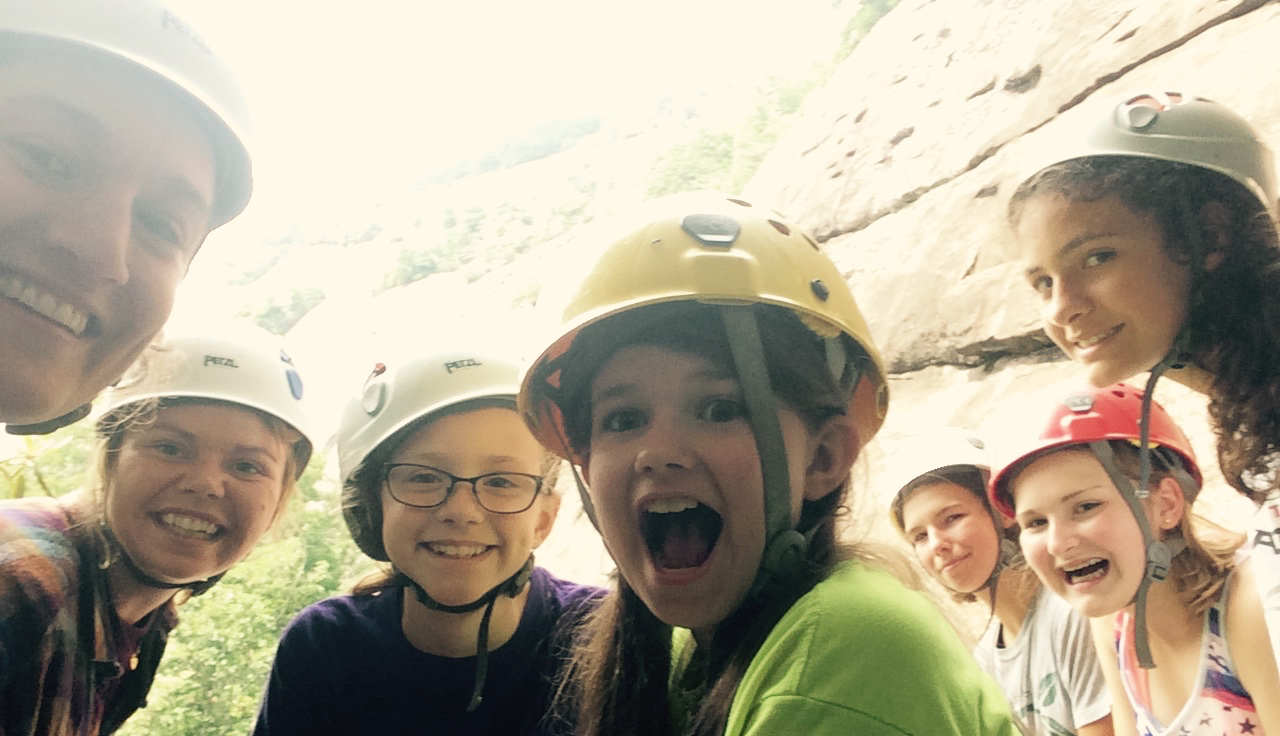 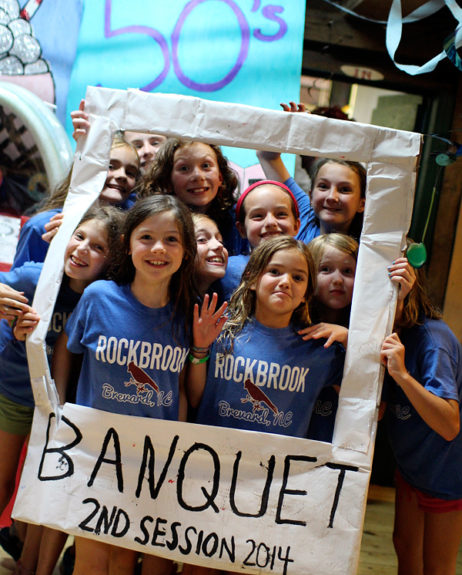 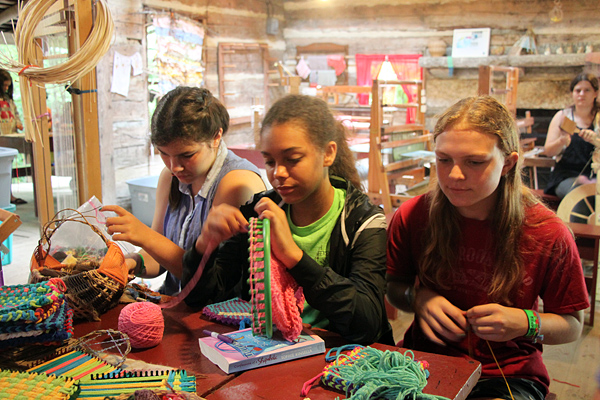 Wandering into Curosty, our fiber arts activity cabin, is like stepping into a working artist’s studio, maybe even a artists’ cooperative, because greeting you are colorful materials, finished and partly finished projects, and many hands busily creating. It’s a wondrous place. The cabin itself is built from 19th-century, hand-cut logs. It has a wood floor and a stone fireplace on one side, and draping its double-hung windows are bright red curtains. In one corner there are three 36-inch floor looms, and along two walls there are small tables with tabletop looms. The walls, though, are the most interesting because almost everything is covered with finished weavings, shelves with spools of thread, balls of yarn and strips of cloth. Embroidery floss, cane, reeds, kudzu vines, twigs and feathers are stacked or hung nearby. Three different areas display example projects the girls can make, things like bright baskets, complex loom weavings, lanyards, dream catchers, pot holders, hats, scarves, purses and wallets. Leading this creative whirlwind of weaving is Melanie Wilder who comes to us from Warren Wilson College where she is a supervisor of the Fiber Arts Program there. You can see Melanie in the background of this photo spinning yarn. She seems to always have a new project in the works for the girls. For example, they have a large group weaving that uses different bits of yarn, cloth and other fibers to create a mountain scene rather than a geometric pattern. She’s having some girls hammer a leaf between two pieces of cloth to transfer color from the leaf into the cloth leaving a neat design. The overall atmosphere in Curosty is joyfully creative as girls experiment with all these different materials and techniques. Sitting with friends, creating with your hands, twisting, threading, and tying different colorful strands, all while having time to chat, tell stories and laugh— being in Curosty just feels good. 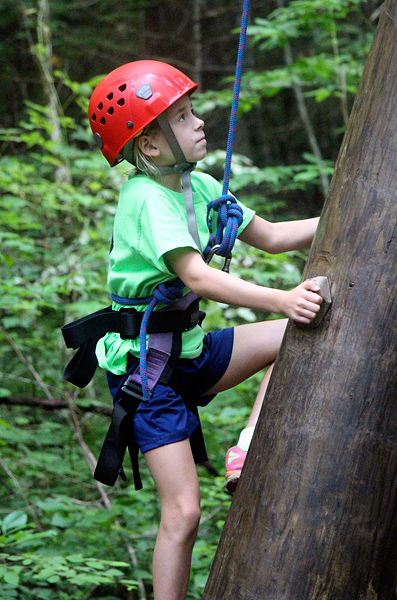 At the Alpine Tower, our 50-foot High Ropes Course located in the woods behind our gym, the girls are working with a different sort of fiber, an 11 millimeter braided climbing rope. Instead of weaving, these girls are tying their harnesses to the rope so a staff member can belay them while climbing one of the 30 or so different routes to the top platform. The rope stretches from the climber up and over a pole above the platform and back down to the belayer on the ground. The tower is an excellent introduction to rock climbing because it requires the same balance, smooth motion, concentration and focused strength. Likewise the equipment and safety protocols are the same. With some routes being designed for a complete beginner and others requiring both polished climbing skills and strength, the Tower is an adventure activity that keeps girls coming back for more. After reaching the top platform, the climber is slowly lowered by the climbing staff members belaying. It’s possible— and a lot of girls do this intentionally for fun —to flip upside down on the rope, the belayer suspending you with your head a few feet from the ground. It’s a goofy stunt. After climbing the tower, and perhaps our climbing wall in the gym or one of the five climbs on Castle Rock, don’t be surprised when your daughter asks you to go climbing with her at the local gym. Not only will it be fun, it’ll be because she wants to show you she’s good at climbing, and knows what she’s doing. 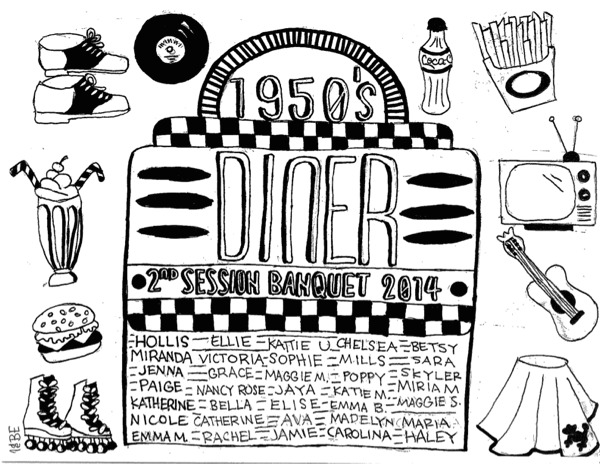 Tonight our 28 CA campers, our 9th graders, unveiled the theme of their secret banquet, and it was a great one: the 1950s. They called the banquet “1950s Diner.” The painted decorations, the floor-to-ceiling posters which lined every inch of wall space, referenced not just the music, the movies and television shows, and the fashion of that decade, but also diner food. In fact, for dinner they served classic hamburgers and french fries, with root beer, ice cream floats. Some of the CA girls wore poodle skirts, while others dressed like greasers and “Pink Ladies” from the movie Grease. One girl zipped around the dining hall on roller skates delivering plates of food. We also saw Marilyn Monroe, Lucile Ball, Debbie Reynolds, Ernest Hemingway, and a special guest appearance by Elvis. The skits were dance numbers with a giant cast of CAs reproducing dances like the “Hand Jive” and the “Twist,” for example. Alternating with songs from the 50s (“Jailhouse Rock,” “Rock Around the Clock” and “Johnny B. Goode”) and modern day pop songs, much of time was spent as a celebration dance party.

It’s hard to explain why, but campers and counselors alike often remark the banquet is the highlight of their entire session. Considering all of the zany fun of camp, this is extraordinary. Yes, the banquet is really fun. The surprise might be a big part of that, as is the thrill of having candy decorating your dinner table. More significantly though, I think the banquets are a true expression of the relationships we’ve formed while at camp, the true friendships and connection we now feel with so many wonderful people. It’s that, combined with an awareness that this is our last crazy celebration together before the session closes. That’s why there is so much hugging at the banquet, and often tearful embracing. It’s an emotional time for must of us. We can feel that this is a very special time of our lives. 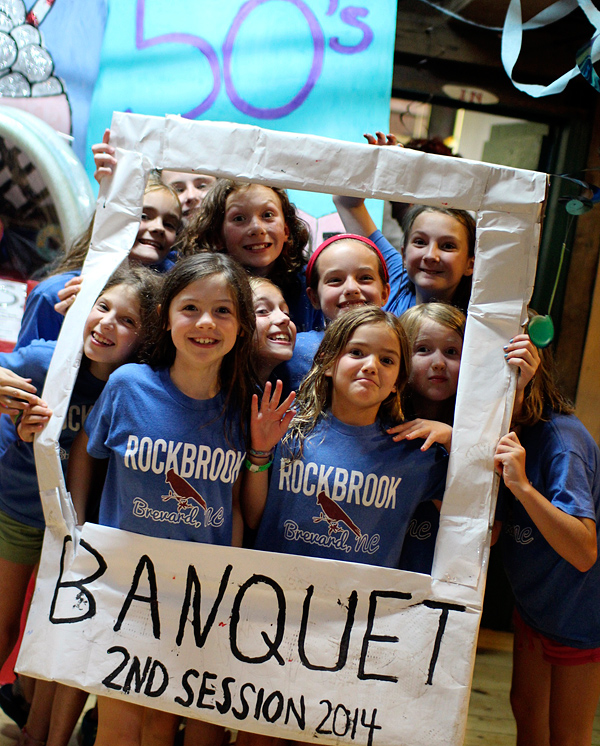 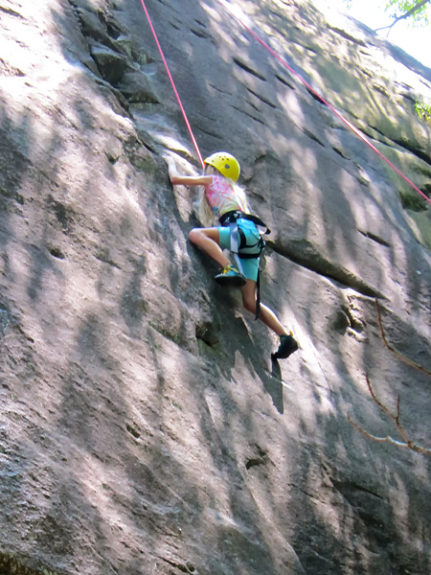 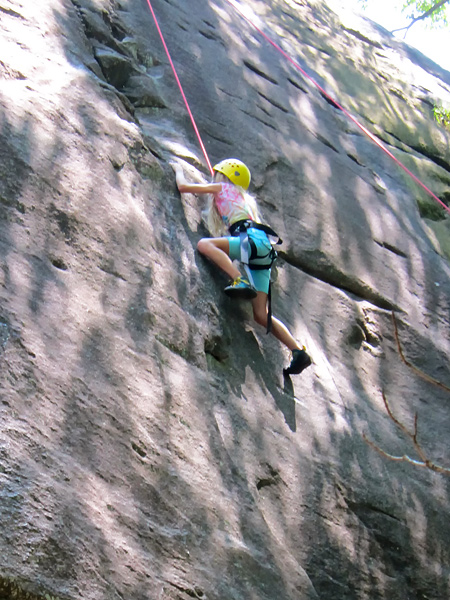 When kids come to Rockbrook for camp, they know there’s going to be outdoor adventure happening, things like backpacking, kayaking and whitewater rafting, but they are sometimes surprised about all the rock climbing available. That’s mostly because there is simply so much rock to climb right here on the camp property, not to mention some of the famous rock climbing areas nearby in the Pisgah National Forest. But it’s also because learning to climb is so popular! No matter how old you are —yes, even the youngest kids— you can climb a real rock just about every day at Rockbrook.

Here’s how it works. Usually at breakfast or at dinner the night before, the rock climbing staff will announce a trip they have planned. Like for all of our adventure trips, the campers can then decide if they want to go. They make their own decision weather to go.  It means giving up their regularly scheduled activities, and that can be a hard choice if you really love horseback riding or archery for example, but it also means enjoying the thrill of getting up on the rock. It helps to have experienced the fun of rock climbing to realize these trips are worth signing up for, but even after just one outing, campers learn how much of a treat they are. Some of these trips are short hikes up to a couple of the routes on Castle Rock, while others will be all-day adventures to one of the climbing areas on Looking Glass Rock.

The Rockbrook Camp rock climbing program is a big part of the adventure activities around here. Hey, let’s go climbing!