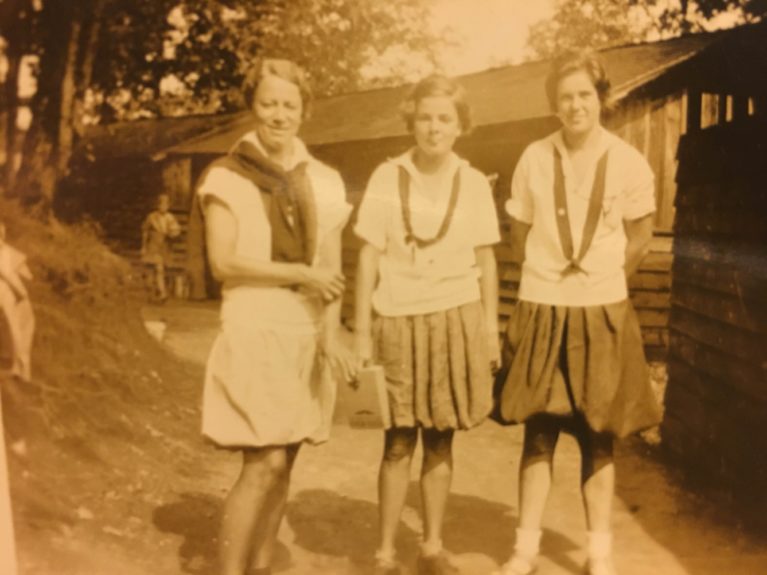 Director of Rockbrook, Sarah Carter, handed me a letter yesterday, while we were winding down from the Jedi Training Academy event and such an incredible Mini Session Opening Day.

At this point, I was still smiley and filthy from both parts of the day, covered in shaving cream, paint, and mud and with “I am your father” written across my forehead. I was in the office and about to settle in for the night, not expecting such a magical surprise to unfold. But I could tell the letter was special by the way Sarah looked at me when she said, “Read this.” 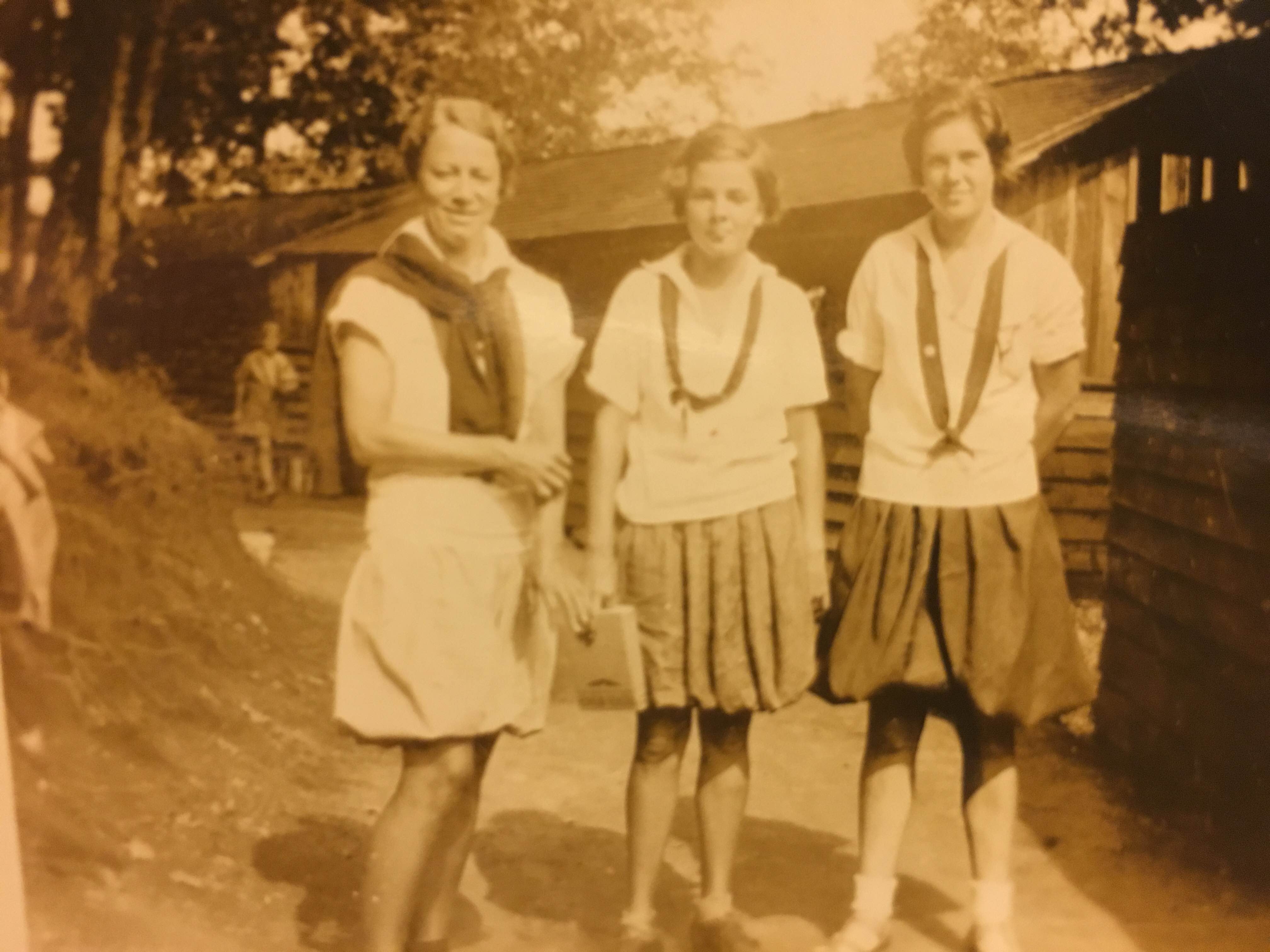 The letter was written by a 90-something year old Rockbrook girl, and it reads: “When my children were old enough to be interested in my own childhood during the Depression, my favorite story was the 8 weeks at Rockbrook Camp in 1938. I was in the 8th grade that year and my mother told me I had a choice: 1) The 10 day trip to Washington D.C. in the spring, or 2) Rockbrook for 8 weeks. Sports has always been my greatest interest in life — The decision was easy.”

She really must have been an incredible athlete! For part of the letter, she describes the awards she remembers receiving, still thrilled after all this time: The awards were given “at the last evening campfire where the owner gave the awards and we all cried our eyes out. I still have my 3 ribbons! Red and blue in Tennis and yellow in Diving!” Although we no longer give out awards on the last night of camp, it seems that not much has changed in terms of how emotional the last campfire, Spirit Fire, can be! 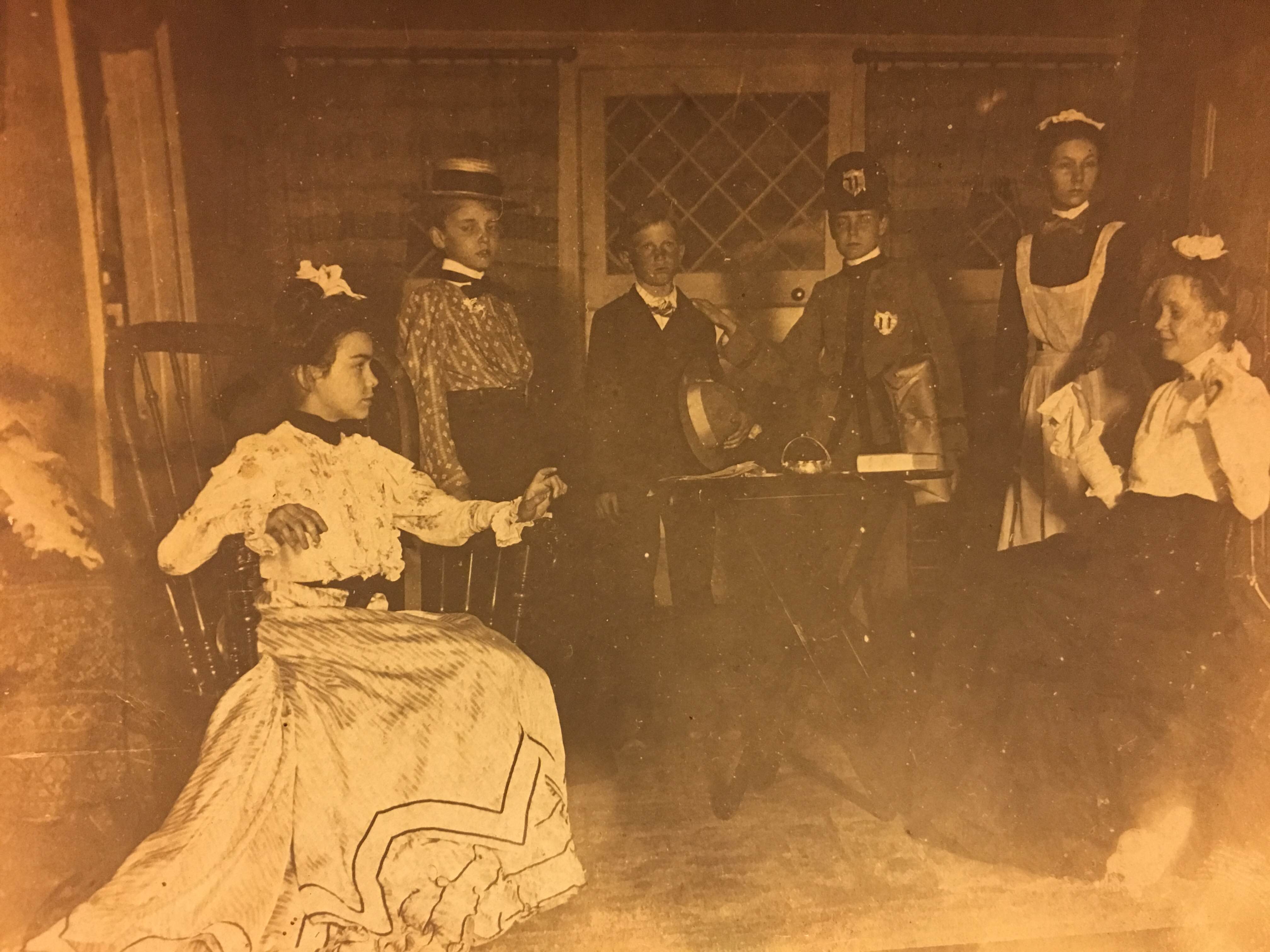 What truly stuck me was the line, “Rockbrook was a life highlight.” I keep saying it to myself today, getting a little teary-eyed and trying to wrap my head around it… I have a million questions for her about what those 8 weeks were like for her and what kind of impact Rockbrook had on her.

She closes her letter by informing us that her daughter had heard someone mention Rockbrook in Maine last week, which compelled her to write the letter. We’ll continue to ponder who this mystery person in Maine could’ve been and are thrilled to write back to our 1938 Rockbrook girl shortly!

***In honor of this special “blast from the past” edition blog-post, I’ve included some vintage pictures that I recently found that belonged to the founder of Rockbrook, Nancy Carrier. 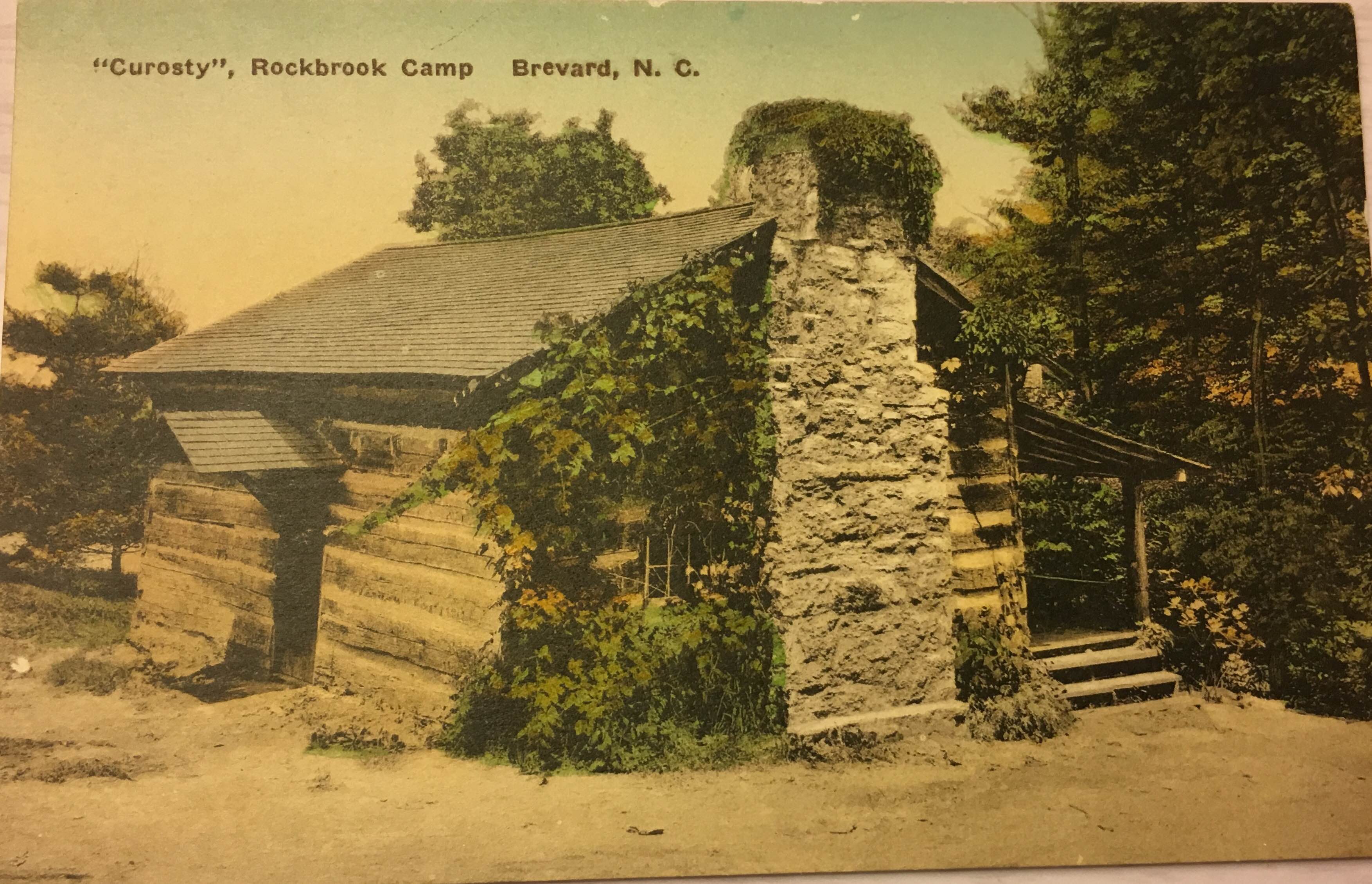 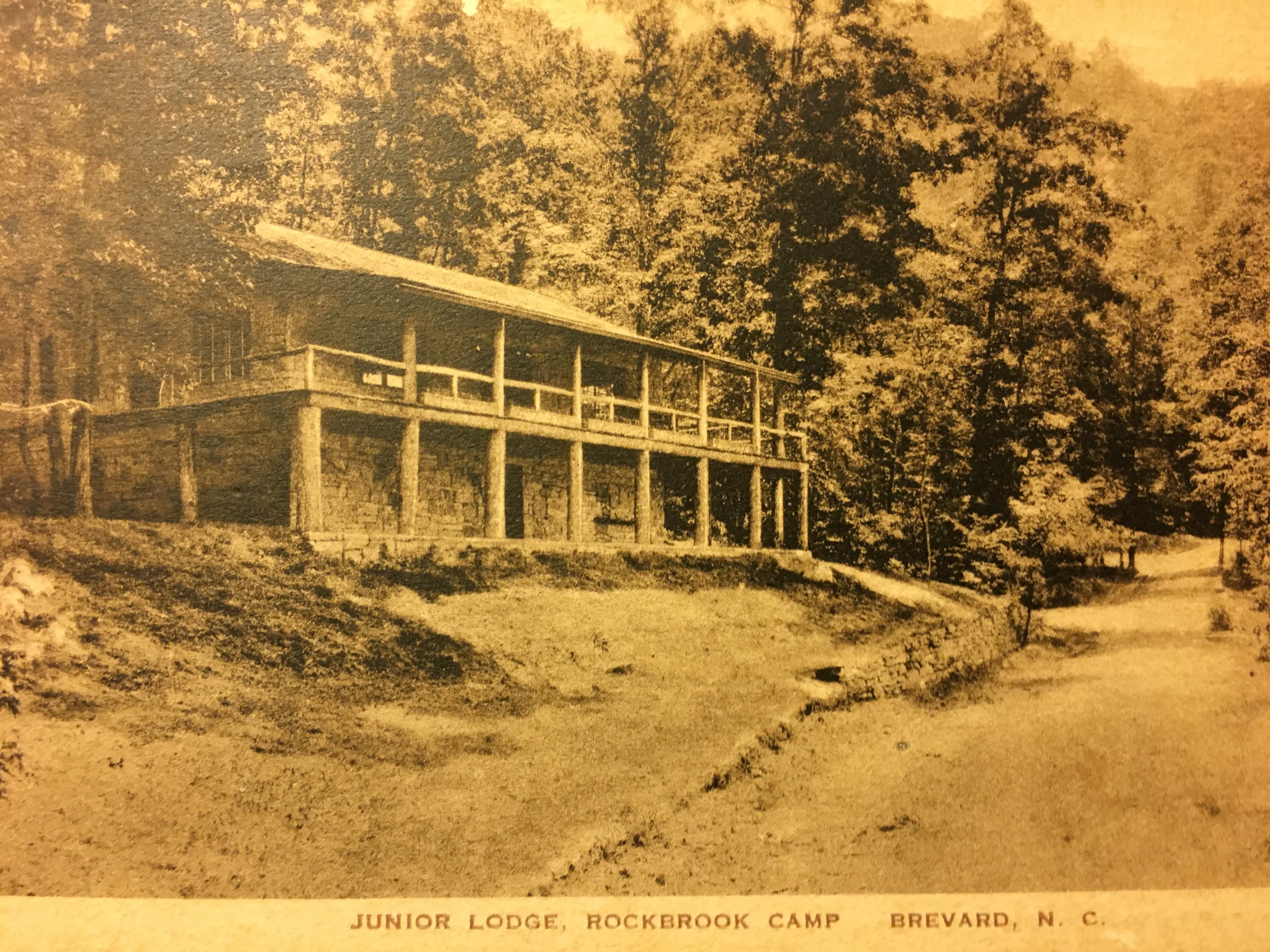 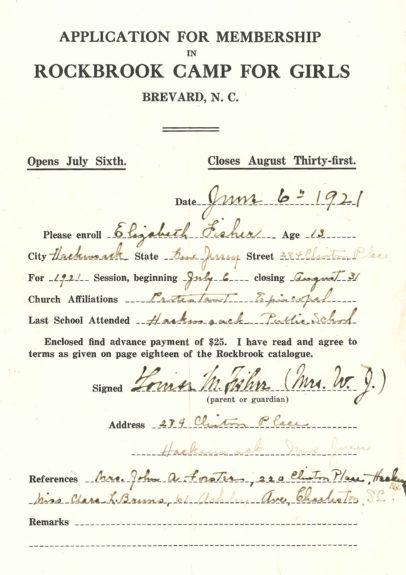 Continuing our series of archival photos and documents, today we have this; it’s an original application to attend Rockbrook from 1921, its very first year. That summer, girls attended for one long session that lasted 8 weeks between July 6th and August 31st. This application shows that Elizabeth Fisher from Hackensack, NJ was one of 35 girls who traveled to Brevard to be the very first Rockbrook campers. So neat! 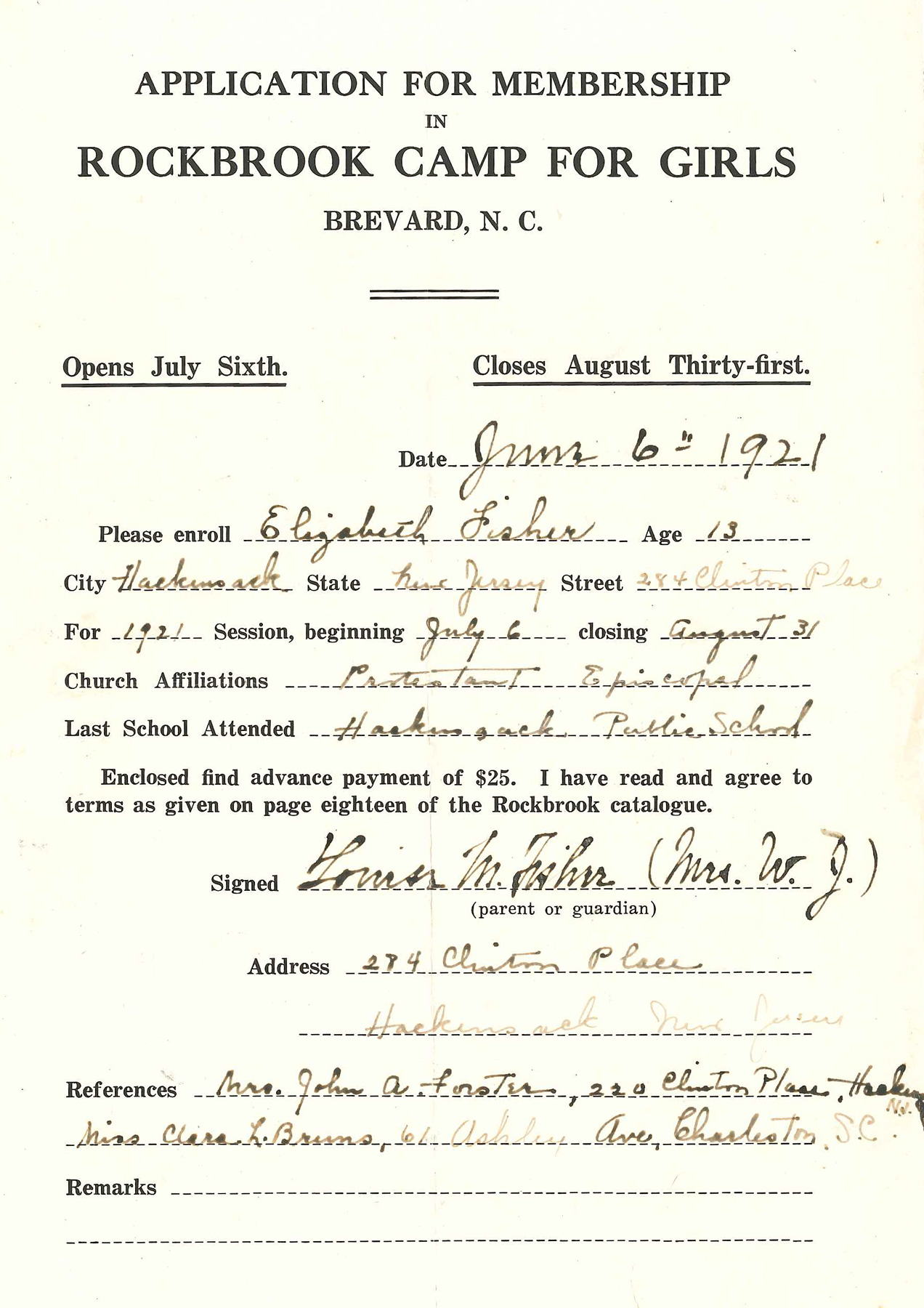 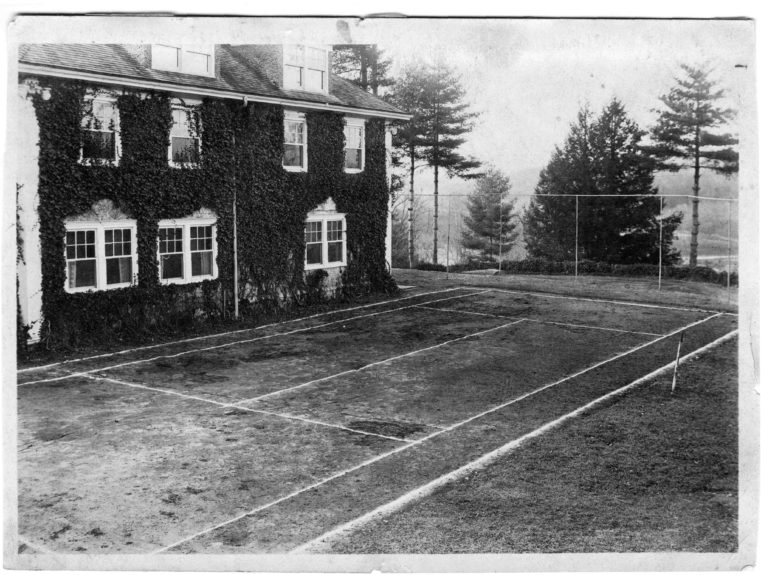 We recently found another Rockbrook photograph during our search of the archives at The Transylvania County Library.  In their records they had this photo of the original tennis courts at The Carrier House.  The Carrier House or Rockbrook House as it is now known was the home of the owners and directors of Rockbrook, Henry and Nancy Carrier.  Here at their house many camp activities were offered including tennis and lawn dancing. Tennis was a popular activity from the beginning of camp and quickly outgrew this first court as the  number of campers increased.  In the late 1920’s two more courts were added and then ultimately three more courts were built.  This original court was removed from The Carrier House lawn and was turned into a beautiful side porch.  Note the small boxwood hedge in the background of the picture, those same boxwoods are now over 9 feet tall!  Here is a previous blog post that tells you more about our current tennis program. 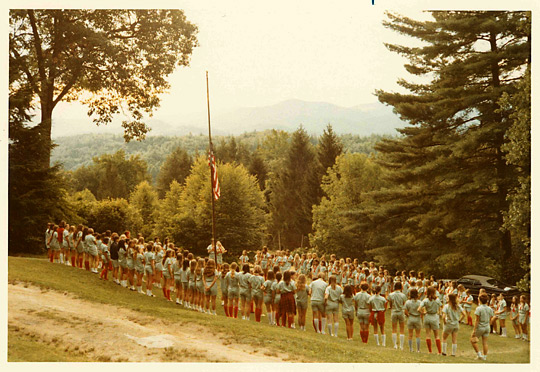 Another quick historical photo post… Browsing through our archives, I found this picture labeled “August 1971.” It shows the Sunday morning flag raising ceremony, the girls gathered on the hill dressed in their uniforms, and the amazing view of the mountains we have at the center of camp. The Sunday uniforms are slightly different nowadays. Campers today wear white shorts, shirt and a red tie, but not red knee socks! 🙂

Is that an Oldsmobile in the background? 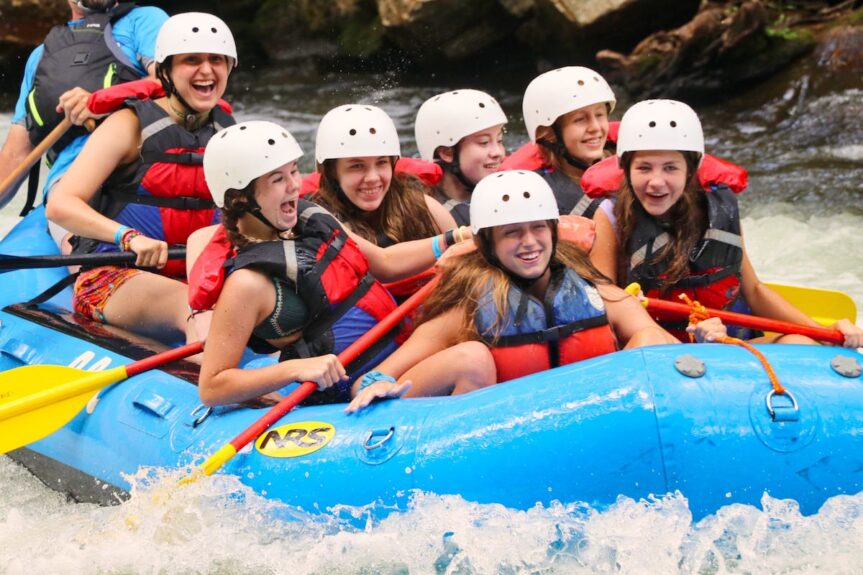 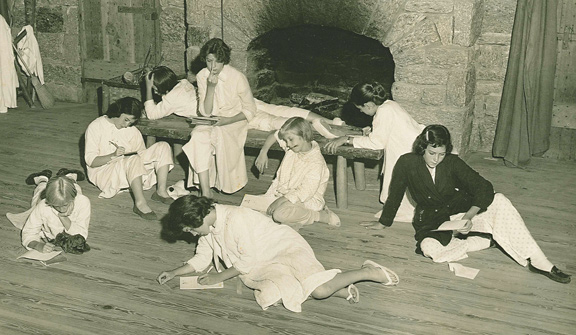 We found this great old photo in the Rockbrook archives the other day. It’s not exactly clear when it was taken, but we’re guessing that it was sometime in the 1950s. It looks like the girls are all writing for the camp yearbook, “The Carrier Pigeon” during an evening program in the upper Lakeview Lodge. It’s when all the girls in an age group take time to jot down a favorite memory (sometimes as a poem or drawing) from their time at camp that summer. We later compile them all and publish the “Carrier Pigeon” each year.

From the photo, you might think it’s a sleepover, since the girls are in their pajamas, but that’s just life at an all girls camp. Nice and relaxed. 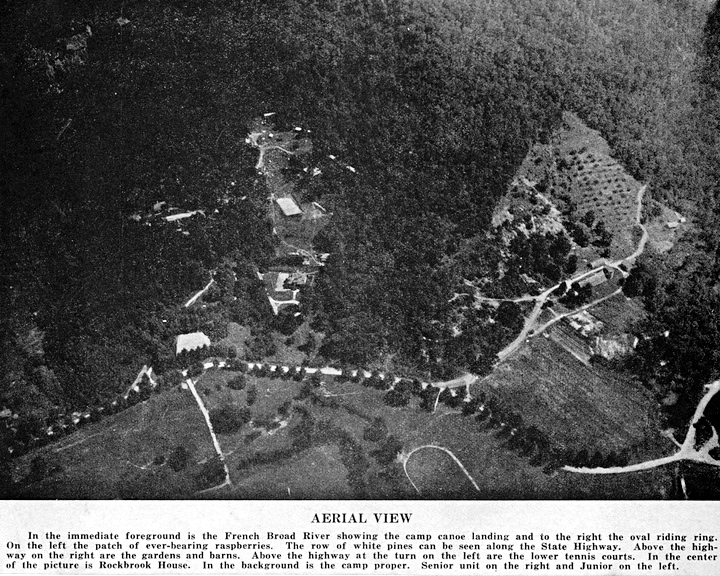 Our friend Carroll Parker dug this photo out of his files and emailed it to us the other day. Carroll grew up around Rockbrook because his father helped Mr. Carrier build the camp back in 1921. This aerial view of the camp shows western North Carolina and all it offered back then— the thick forests, streams, the “ever-bearing raspberries,” the French Broad River horseback riding ring, tennis courts, chicken coop, horse barn, gardens, and an apple orchard. 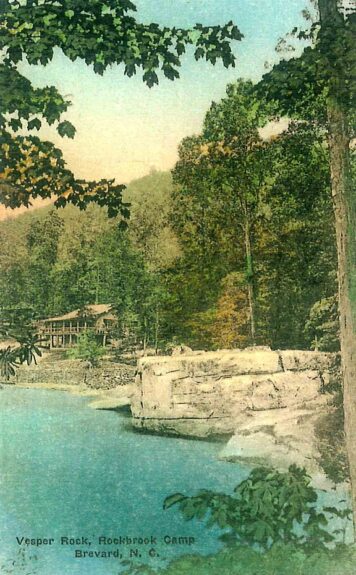 Here are two more vintage postcards showing the historic character of camp. Like the others we’ve posted, the Albertype Company produced these postcards in the 1930s. The first is a view of Vesper Rock looking out across the camp lake, and in the background you can see the Lakeview Lodge. The second card is even cooler because it shows what the Carrier’s (Rockbrook’s original owners) waterwheel looked like. It was dismantled many years ago leaving only the stone foundation which you can just barely spot down in the woods below the lake.  Wouldn’t it be cool to rebuild it?  Maybe someday we will!

P.S. Want to see more historic photos of camp, including another view of the waterwheel?  Check out these. 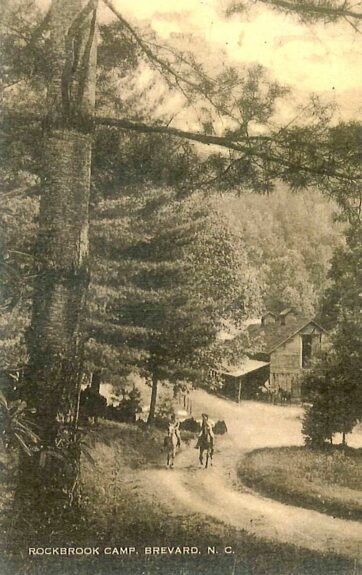 Here’s something cool. Back in the early 1900s, the Albertype Company of Brooklyn, NY produced a number of postcards documenting scenes all around the country. Rockbrook Camp was apparently a favorite subject because we’ve found several cards from the 1930s highlighting scenes of camp. They are just excellent archival documents showing what camp was like in the early years.

Here we see a scene of the old horseback riding barn and paddling canoes on the French Broad River as it passes by camp.  Don’t you just love them?!