“The British are coming! The British are coming!”—we awoke to riders on horseback, yelling Paul Revere’s warning to get us up for the much-anticipated holiday: Independence Day! Some campers groggily rolled out of bed, others excitedly sprang up, but before anything else, we all met on the hill in our pajamas for the flag raising. The high-ups raised the flag as we sang a round of America the Beautiful.

For days of lead-up, returning campers and staff alike have been anticipating July 4. Most say it is their favorite day at camp, or their favorite holiday in general. By the time we got to breakfast, it wasn’t hard to see why: giant balloon shapes of U, S, and A were above the salad bar; red, white, and blue stars and stickers were scattered across the tables, and stars and stripes banners were strung across the room. The meal was filled with patriotic songs like Yankee Doodle and Party in the USA. Our conversations revolved around the 4th of July, too. Some cabins engaged in a round of American History trivia after they were finished eating. They asked each other fun questions and learned so many new things! 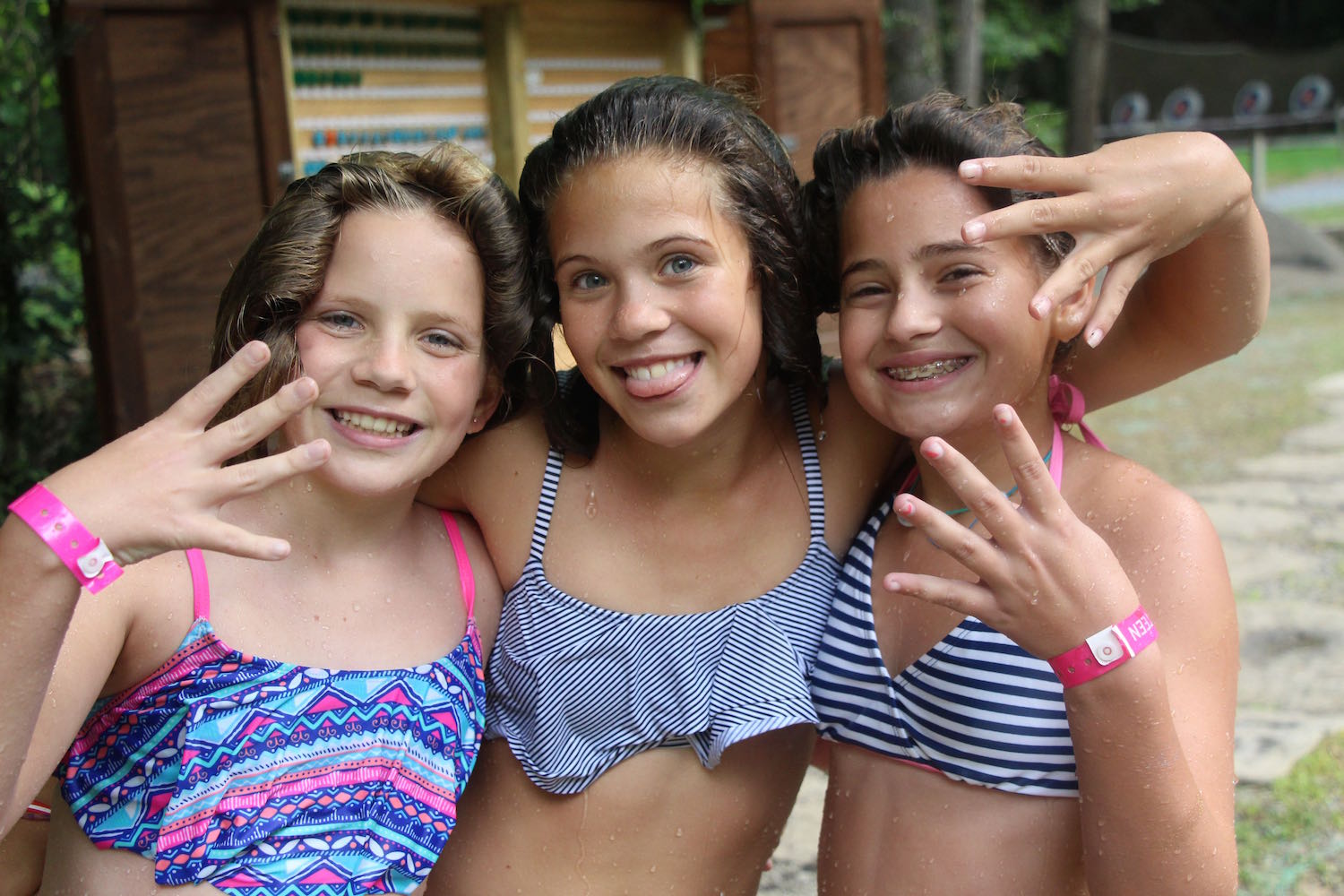 After breakfast, it was time for activities. Some activities decided to join in the patriotic spirit and theme them! Swimming was particularly spirited—the girls loved dipping their hair in the water and coming up with what they called George Washington hair-dos! They also had a great time retrieving red, white, and blue balloons, and having greasy watermelon relays. The spirit from the lake was felt all through camp!

The biggest events of the day, however, occurred after second free swim. We all gathered on the hill to enjoy a cookout dinner! We got to choose from burgers, spicy chicken, barbeque chicken, and a variety of veggie burgers for dinner, and we enjoyed eating with our friends on the hill surrounded by music and the warm air. The creek was filed with soda, and girls got to choose their favorites—a rare but welcomed camp treat! We had wonderful conversations, and it was topped off by a slice of strawberry shortcake and fresh whipped cream! Nothing could have been more perfect as we lingered on the hill, enjoying every last bite! 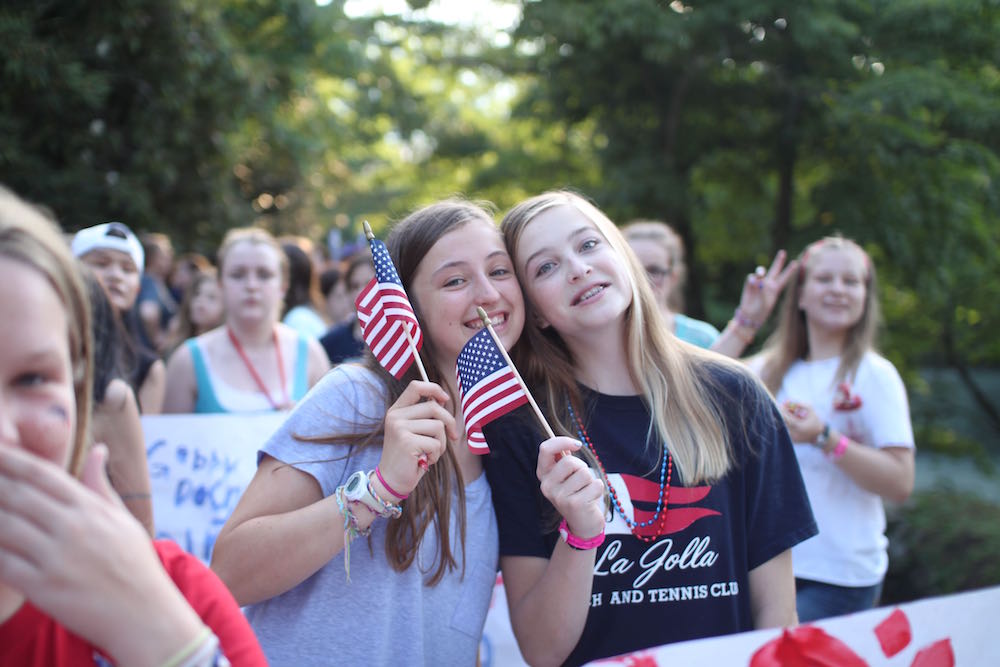 We left the meal and the senior cabins gathered to prepare for the Fourth of July Parade! Earlier this week, the girls from the senior cabins painted giant banners for the parade. These banners had themes like ‘Great American Movies,’ ‘Regional Foods,’ and ‘American Music.’ One cabin knew all of the presidents by name and wrote all of them on the banner! Another cabin, whose theme was ‘Great American Women’ painted a remarkable depiction of Rosie the Riveter with the words “We Can Do It” in huge letters underneath! The senior girls lined up and received bags of candy while the middler and junior campers lined up on the driveway. The cabins went one by one, yelling chants (“American movies really rock—now throw that tea off the dock!”) and tossing candy. All had fun!
The parade route ended in the gym, but once the campers got there, they realized that their counselors had mysteriously disappeared! Soon, Chase told the campers that they would have to find their counselors—tonight was Counselor Hunt! After giving the counselors some time to hide, the campers stayed in their cabin groups and sprinted to see who could find the most counselors. Counselors were found hidden in the forest, behind the bathrooms, and behind trees. Every counselor represented a state, and the points that each counselor was worth depended on when their state became a part of the USA. Once the bell rang, counselors who were still hidden ran to the flagpole and campers could tag them to earn their cabins some last minute points! In the end, Senior 8 won the competition and won an upcoming trip to Dolly’s, which is probably the most highly regarded prize imaginable at camp! 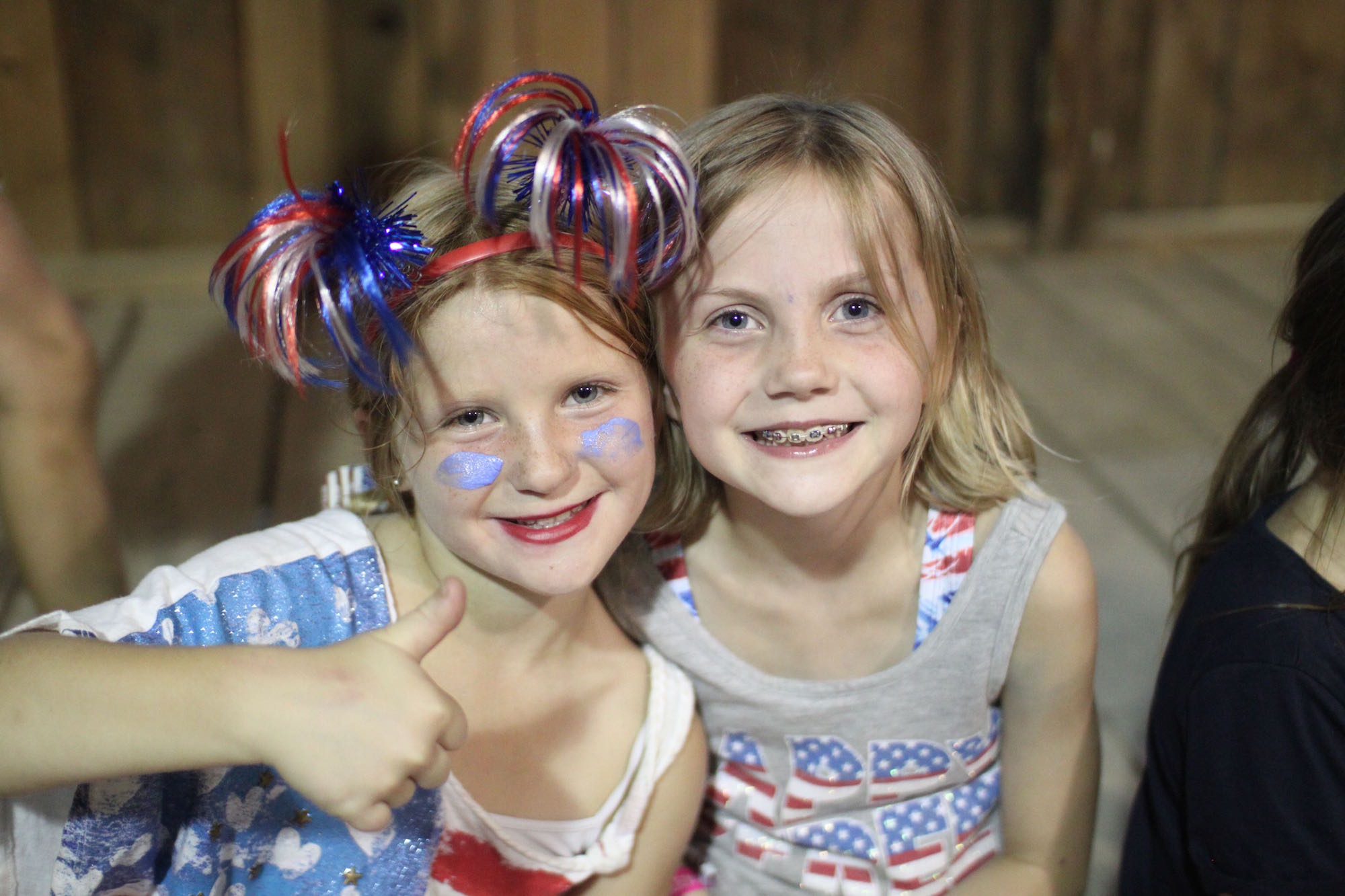 After the Counselor Hunt was over, we did a group dance, the “Wop,” and then gathered on the hill to settle in for the fireworks. Music was playing in the background, and everyone was decked out with glow sticks and patriotic clothes. Girls danced on the hill and had energetic conversations as we waited for the fireworks to begin. The day had been so perfect—a combination of breezy warm weather, delicious food, tons of spirit, and good friends, so we were all in a wonderful mood as we soaked up the perfect night and anticipated the fireworks show to come. Soon, the fireworks began! It was a spectacular show, with Katy Perry’s ‘Firework’ playing in the background among a variety of other songs. They lit up the sky, and, sitting beside best friends, it was the best cap to the night we could imagine. We were filled with wonder and joy as the beautiful colors lit up the sky. Jeff sets them off at the dock of the lake, so we have a great view of them from the hill!

Full of gratitude and wonder, we made our way to bed and fell into deep sleep. The day had been full of warmth and bliss, and it is sure to live in all of our memories as one of our best days ever at camp.

Leave your reply on “Stars, Stripes, and Smiles”