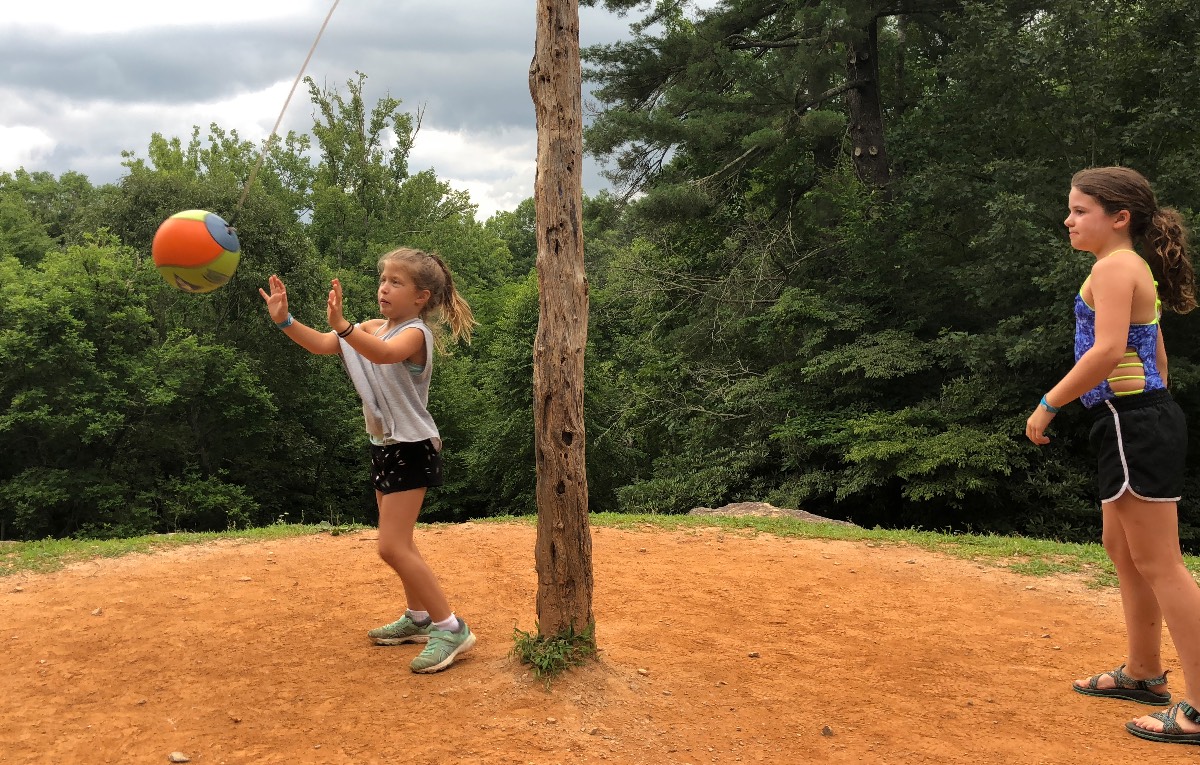 Tetherball. It’s one of the simplest pastimes at Rockbrook, but also one of the most popular ways for the girls to spend a few spare minutes between activity periods, right before meals, or during one the three designated slots of “free time” each day. There are two tetherball courts at Rockbrook, one by the gym and the more prominent spot near the hillside lodge.  Made from a 10-foot tall locust tree pole, that tetherball court has a cool open feel to it, and since it’s centrally located, seems to always be in action.  Look over the hill and you’re bound to see a colorful ball swinging around the pole on a rope.

The game of tetherball is simple —hit the ball and wrap the rope around the pole as your opponent tries to hit the ball in the opposite direction… whoever wraps the ball completely is the winner.  When someone wins, that’s called a “tether.” The other day a few girls explained some of the other game terminology.  If a player grabs the rope instead of hitting the ball, that’s called a “ropey,” which is a foul of sorts, as is something called a “holdy,” which means grabbing the ball altogether.  When one player commits either of these fouls, the other player is allowed to employ the same foul. In addition to a regular single hit, there are two more hits that more advanced players use: the “double tap,” which simply means hitting the ball once before hitting it a second time, and “popcorn,” which means tapping the ball multiple times before hitting it around toward the other player. In a tetherball match, the winner of a game keeps playing until defeated by a challenger. The challenger always serves, which is a slight advantage. This may all sound like serious stuff, and to an extent it is for some of the girls, but playing tetherball is also a fun game of skill perfect for playing with friends at camp. 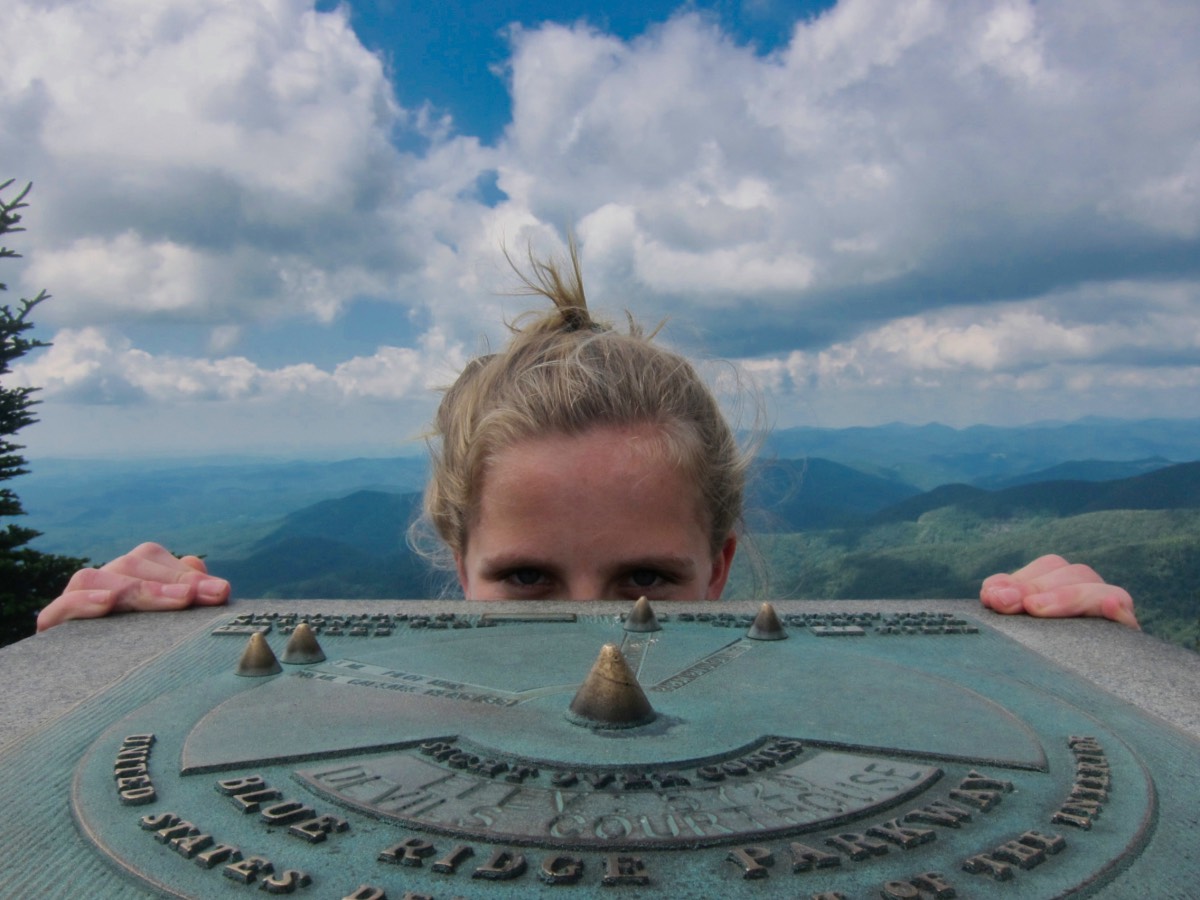 Today the adventure staff announced a trip for the girls up to the Blue Ridge Parkway and a hike that included a stop at Devil’s Courthouse. This is a spectacular destination. At an elevation of more that 5700 feet, it has a panoramic view of the surrounding mountains. On a clear day, you can see 4 different states! This photo shows a girl crouching behind the marker that allows you to identify far off mountain peaks by sighting over the brass cones. It’s quite a steep hike to reach the summit, but this view is really incredible and definitely worth the trip when the weather is nice like it was today.

This afternoon, we paused our regular activities for “cabin day,” a time when each cabin sticks together and enjoys a special activity as a group.  Ordinarily the girls sign up for individual activity schedules, so this is a nice time to bond with bunk mates and do something special.  One group decorated t-shirts with markers, while another used paints to design colorful glass jars.  There was food involved for some— decorating cupcakes for the kitchen, using a scoop to make a huge bowl of watermelon balls, or shaping cookie dough for baking the evening’s cookies. Another group played games like an egg toss, and another took a hike to Rockbrook Falls for a wet-n-wild creek hike. 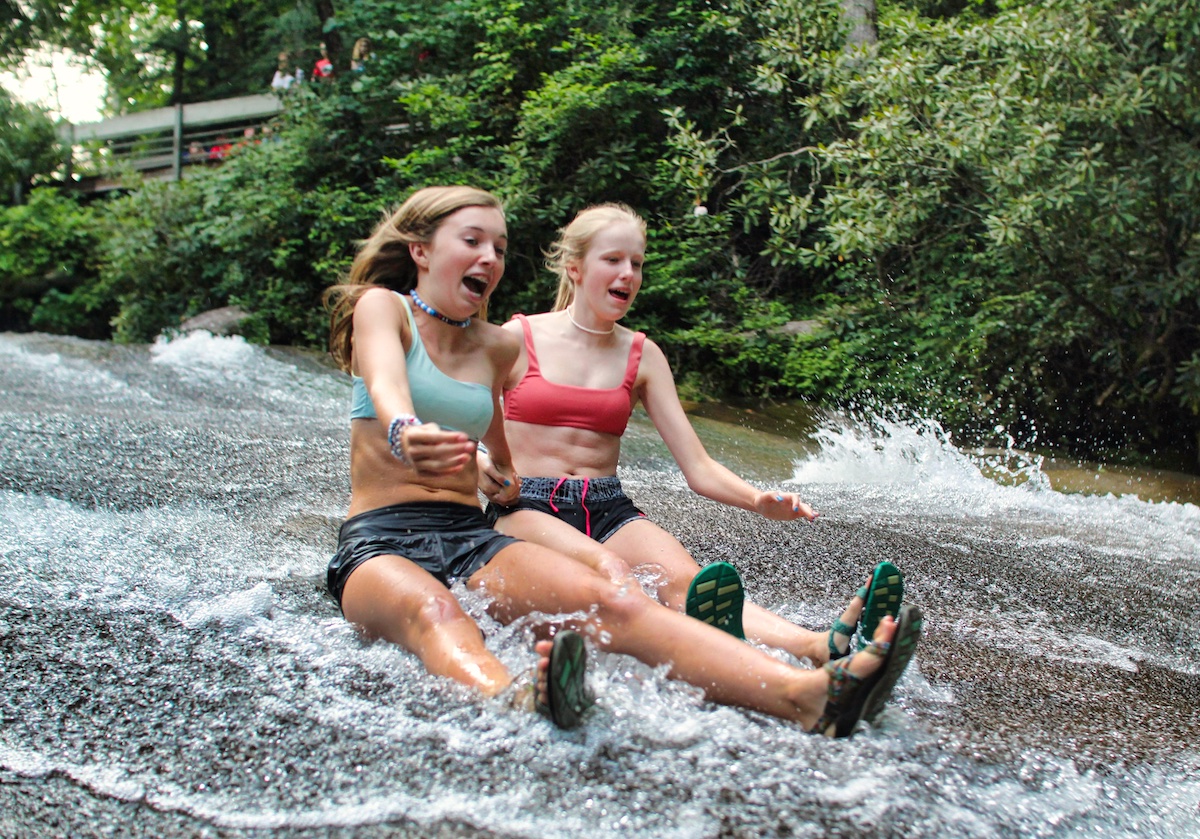 All of the Senior girls stuck together for a picnic dinner in the Pisgah Forest followed by a trip to Sliding Rock. This trip has become a tradition of sorts at camp because it’s so popular. The girls love loading the buses and riding high up into the forest to eat dinner and play a few games before screaming their heads off while sliding down the chilly natural water slide. One glance at the photo gallery and you can tell by the looks on the girls’ faces— an extraordinary combination of wide-eyed trepidation and full-bodied excitement —that sliding rock is a true thrill. It was impressive how many girls slid down the rock multiple times, each time getting just a little colder and even more excited for the ride.  The end of night brought all of us (almost 100 people in all) to Dolly’s Dairy Bar, the one and only ice cream stand.  This too is a loved tradition, a must-do part and the perfect cap to this thrilling night out. 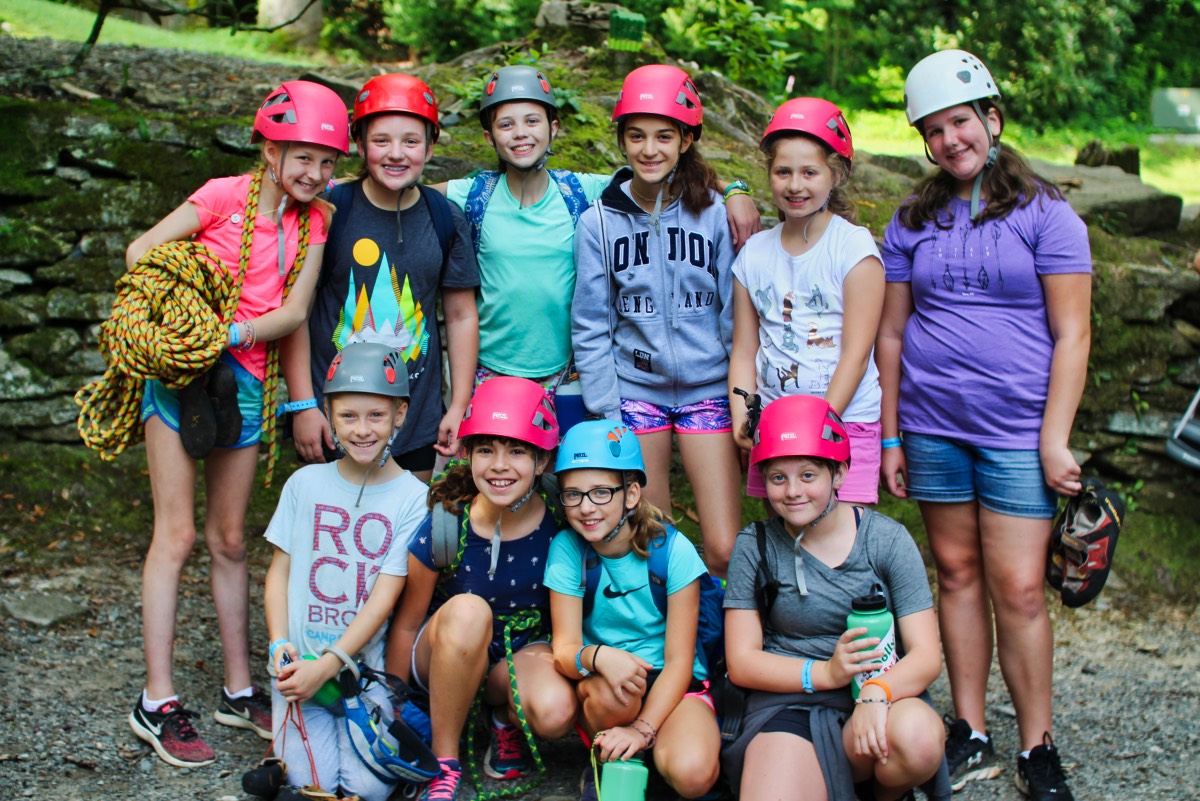 Leave your reply on “Full-bodied Excitement”