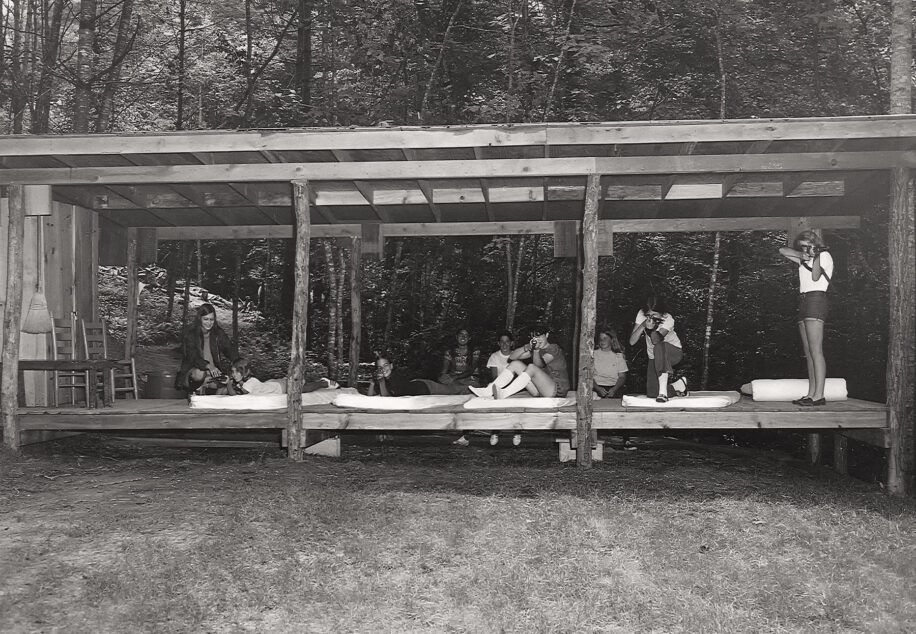 One of the many unique traditions of Rockbrook is the signatures in many of the cabins. Campers can sign their names along with the year and session on the inside, allowing them to leave behind a little bit of their legacy that they can return to years later. There are also a few special places besides cabins where signatures can be found. One of my favorite places at camp to read the signatures is the rifle range. The signatures on the range date back to the 1960’s (the original range was located where Nature Nook is now). As a riflery instructor, I have spent a lot of time at the range and have enjoyed reading the Riflery Woman of the Week plaques from the 60’s or the “We Creamed Keystone” or “Carolina was shot down today!” victory declarations from tournaments.

As a camper sitting on the student bench, one name really stuck out to me: “Jane Spell High-Up 77” is written in a light blue paint that seems to only have gotten brighter with age while other names have faded. I’ve always wondered what she used to write that with! Later as a riflery instructor, I read on the inside of the gun cabinet where Spell supposedly “ate a bullet 7-25-77.” I always associated Jane Spell with the rifle range and was excited to meet her one summer and later learn she and my mother went to camp together.

One of the most exciting parts of being a riflery instructor is getting to name the guns. The girls enjoy calling the guns by their names and returning each year to shoot their favorite gun. We have Annie Oakley and Drop Dead Fred for the classic Westerns, Draco Malfoy and Captain Jack Sparrow from recent big movies, Guildenstern from Shakespeare, and Big Daddy, Bad Momma, and Little Bertha too. Some old favorites who have since been retired are the Fresh Prince of Bel Air, Oscar the Grouch, and Old Dirty Betty. I chose to name one of our new guns “Spell” in honor of Jane Spell, who has always been a part of the rifle range to me even before I met her. The gun reads “Spell” and then in a smaller print: “eating bullets since 1977.” This summer the campers were so excited to shoot the new gun. Every time we had a new group at the range, someone would ask, “Is Spell named for Jane Spell?” Their next question would then be: “Did she REALLY eat a bullet in ’77?” I wasn’t there in 1977, so I can’t for sure say if she did, but I do know Jane Spell became a Rockbrook legend when it was written in the cabinet! 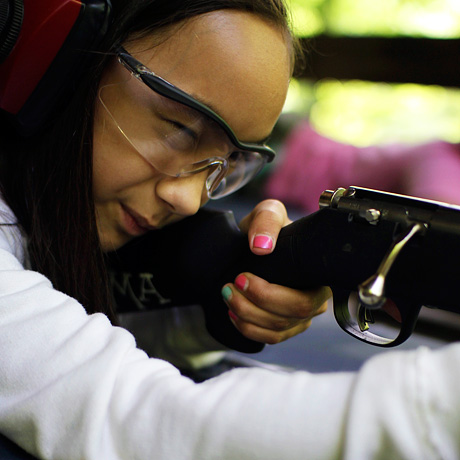 The riflery activity at camp, target rifle shooting, is something that really grows on you. Once you learn the safety rules at the rifle range, and get used to the basic techniques (not to mention the sound and smell of guns going off!), what can you do to improve your shot at camp?

Well, here are two important tips for shooting well. First, you need to have smooth trigger control. Learn to apply slow, consistent pressure to the trigger of the rifle so you can fire it without jerking. Squeezing the trigger quickly or erratically will definitely throw off your aim and mess up your shot. Next, it’s just as important to control your breathing when shooting, to take deep slow breaths rather than quick or hurried breaths. Here too, breathing too rapidly can make it difficult to aim steadily. Holding your breath just before pulling the trigger can help. Overall the goal here is to hold really still so you can make very small adjustments while aiming your rifle.

Back at camp you’ll have plenty of time to practice your shooting. 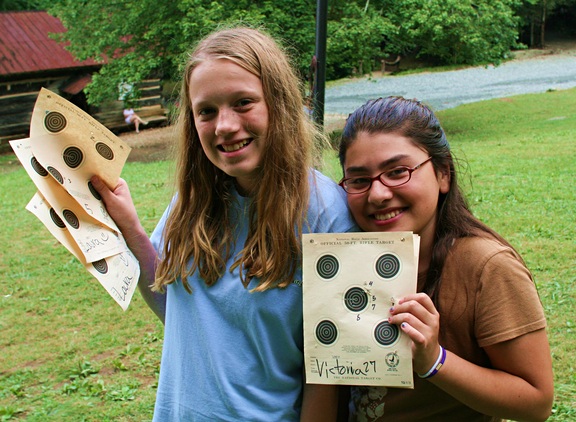 Hey what’s your score? How’d you shoot? When girls select riflery as one of their camp activities, they first learn the basics of shooting. After some practice, camp girls develop their marksmanship skills and begin to shoot more evenly. When they can consistently hit higher scores, they can pass through a series of NRA ratings and earn special “Light Rifle Qualification” awards.

On these official targets, a bullseye earns a score of 10. That means the ordinary round of five bullets can total 50 in all. One “course” is 20 shots (4 rounds of 5 bullets) for a total possible score of 200. So if, from the prone, or lying down, position, you can shoot two courses that score 100, that earns you the “Pro-Marksman” rating. If you improve and can shoot two courses of 125, you earn the “Marksman” rating. And it goes up from there: 3 courses of 150 earns “Marksman First Class,” 4 courses of 165 earns “Sharpshooter,” and 6 courses of 180 earns the “Expert” rating. Wow!  That sure would take a lot of practice!

Learn more about these ratings over at the NRA website. 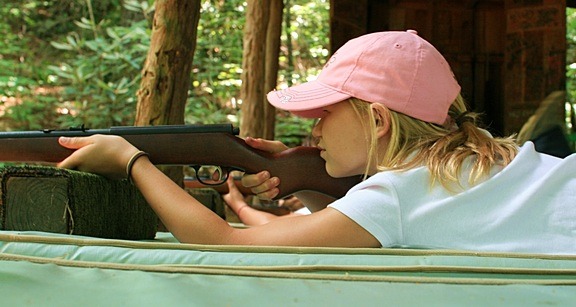 Sometimes parents are a little surprised to learn that the girls at camp learn to shoot rifles. We’ll sometimes hear, “Are those real guns?” They sure are! While our youngest girls will use “youth” rifles, everyone shoots real .22 caliber guns. This means the bullets are small 22/100ths of an inch in diameter. We also use the lowest power .22 ammunition, the “short” rimfire version. These are the perfect choice for target shooting, particularly on our youth range (25 meters or about 82 feet to the target).

Shooting is of course completely controlled and supervised at camp. The guns and ammunition are always locked and stored separately. The riflery sport instructors are trained and NRA certified to operate a rifle range, and all of the campers are taught the proper safety protocols when they choose riflery for one of their activities. So yes, the guns and bullets are real, but we do everything we can to make sure it’s very safe.